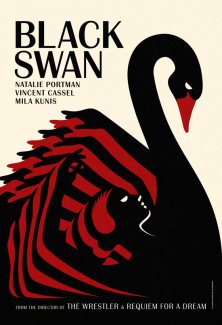 Now I know I’m not taking any dance lessons any time soon.

If anybody is going to make me feel totally creeped out, and utterly confused of my surroundings, Darren Aronofsky is the man to do it. He directs this film perfectly. It’s so tense at times that you don’t know quite exactly what’s going on, but you know something is bound to just happen, and you can’t take your eyes off the screen.

The one thing that glued me into this story was the fact that it really does mess with your mind., which you will rarely get in the theaters nowadays. You can’t really tell what’s real, or what’s dream-like, but you know it’s not all good. There are certain images that just give you that huge sense of paranoia, and have you know that nothing is going right. I was creeped out by a lot of the crap that was going on, but most of all I was effected.

I had one problem with this film, and it was the story at hand. I liked how the story touches on themes such as obsession over one’s work, and perfection, but the story had me pretty bummed. The film tells us the story of the play within this film, Swan Lake, which is all fine and dandy, until we start to realize that the play itself almost mirrors exactly what’s going to happen to these characters in real life. So the idea of not knowing what’s going to happen next was almost dead for me, except for some parts, that actually did throw me off, so the film wasn’t totally doomed.

Natalie Portman is probably what really has this film kicking. I think she is a good actress when she needs to be, but we still have never gotten that role from her, that just ultimately sticks out in our mind, other than the one from Closer. But here, she changes all of that, and gives the best performance of her career. Her character is so completley delusional, weak, and overly obsessive with being the best, that you sympathize with her in the beginning, but then you start to see her go through this transformation to a very bad, living on the edge kind of girl, and the transition is believable. You can feel the stress coming from her character, and when she let’s it all out, you know it for sure. I also enjoyed how she really did fight for this role, probably being about 90 pounds for the role, as well as mastering all the dance moves that were needed. She looks very legit for this role, when she is, and even when she isn’t dancing. Hopefully an Oscar will be coming her way soon.

The supporting cast is also something to talk about as well. I have never really liked Mila Kunis when she’s playing those dramatic roles she does, because I can never fully believer her at all, but here she does a very good job at it, probably because her character isn’t all that serious which I liked. She’s cool, sexy, and funny, which brings a lot to the film, as well as competition to Portman’s character who is so sheltered, its cool to see these to interact with one another. Vincent Cassel is also very creepy, but good as this sly, manipulative show director, that takes every advantage he can find. Barbara Hershey was also very good as Portman’s mother, that has a lot of creepiness to her, but it all works, because shes good at playing that. Winona Ryder shows up and has a good scene here and there, and it’s always good to see her back and working.