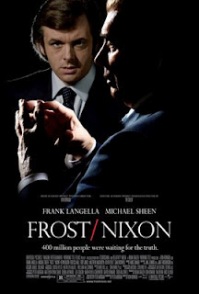 I would have definitely liked it more if they interviewed the Nixon from Futurama.

This is a period piece, that centers on little-known talk show host David Frost (Michael Sheen), who goes way out of his way to interview probably one of the most controversial and famous presidents of all-time, Richard Nixon (Frank Langella). This is the story of how those interviews went.

I really didn’t know too much about the Frost/Nixon interviews other than the fact that they both were interviews between two dudes. Goes to show you how much I paid attention in history class after all. Surprisingly though, this is not a history lesson and more of a film about the two dudes who were in these famous series of interviews together.

Director Ron Howard really gives it his all with this film because of the way he makes these interviews seem less like actual interviews and more like a boxing match of words between two famous figures. Howard keeps the tension building up and up on these interviews and gives us enough character development to realize just how much both of these people need these interviews. One for fame, the other for forgiveness and setting the record straight.

Another great element to this film that makes it so damn watchable is that it’s script is very very good with a lot intelligence, wit, and small doses of humor to keep us laughing and entertained. It’s basically a “talking heads” film where you just watch a whole bunch of people talk without anything really happening, but it’s a very fun one that relies solely on the fact that it can keep people glued into what Frost is going to ask, and what Nixon is going answer with. I never actually saw the play that this is based off of but apparently everything is taken verbatim which makes the transition from stage to screen even better.

The problem with this film that keeps it away from being anything perfect or amazing like it could have easily been is that I feel like Howard could have really went out-of-bounds with this film. Granted, this is a very small film where there isn’t really a lot happening other than these two guys talking but I feel like there could have been more of how the nation felt about these interviews, and more about other characters that are just sort of there.

I also never understood why Howard have the actors who portrayed these actual people, come off and randomly narrate what was happening and why. I feel like the film is trying to give a sort of documentary feel when in reality it could have just stayed away from that or even used the real-life people itself. We all know who the actors are and who the real people are, so there’s no need to trying to show us otherwise.

Michael Sheen is a lot of fun to watch as David Frost because this guy is sometimes at the lowest points of his life, but no matter what keeps a big olde smile on his face. Sheen reminds me of that very cheeky, very corny, but always funny British guy that always seems to think he’s better than everybody, and usually is depending on who you are talking. However, this film really does belong to the one and only Frank Langella as Richard Nixon.

Even though he doesn’t look like Nixon, Langella probably does the best performance/impersonation of the man that any other actor has ever done in their whole lives. Yes, Anthony Hopkins has played Nixon too, Langella is THAT GOOD. You notice the physical differences within the first 5 minutes but then you totally got lost in this guy because he really just sells this whole conflicted, and tormented soul that knows what he did was wrong but he can’t get past it with everyone around him always breathing down his neck. There is some pretty wild stuff that Langella does as Nixon, such as losing his temper like a 7 year-old would do if his mommy didn’t buy him ice cream, but it’s totally easy to see why Langella got nominated for an Oscar and hopefully he keeps on getting better roles from now on.

Consensus: Though it doesn’t achieve greatness, Frost/Nixon is still a great flick with two great performances, a clever script, and a direction from Howard that keeps this film tense and on its toes.