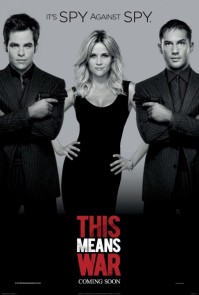 Maybe if these guys sang some Johnny Cash, they would have won her over easily.

The world’s deadliest CIA operatives (Tom Hardy and Chris Pine) are inseparable partners and best friends until they fall for the same woman (Reese Witherspoon). Having once helped bring down entire enemy nations, they are now employing their incomparable skills and an endless array of high-tech gadgetry against their greatest nemesis ever – each other.

From afar, this actually looks like a pretty fun flick with a clever premise, a ‘True Lies’ feel to it, and three reliable leading stars. However, it’s such a shame to see all of that go down the tubes when you have a crap director like McG. That’s right McG. The d-bag that single-handedly killed the ‘Terminator’ series.

The film begins with another shitty McG action sequence that is loud, stupid, unneeded, and cartoonish to the point of where I couldn’t believe anything going on and also to the point of where I couldn’t even tell either because McG felt the need to move the camera around constantly just to add more of a crazy feel to it. The action isn’t a constant in this flick but when it does happen, it looks poor. I know they spent a lot of moolah on this flick, but I have no idea as to why the hell they would considering none of it went to the budget.

To be honest, I think half of it went to the THREE writers they had for this flick and I’m definitely thinking that one of them still hasn’t graduated 5th grade yet. The film tries so hard to be funny within the first 15 minutes with all of the fart, sex, and dick jokes that never hit the mark at all. It also sucks because this film borrows from so many other flicks that after awhile it’s just too hard to imagine this flick as its own, original self, and more as a parody flick that takes all of these ideas from other movies and puts them into one for shits and gigs. The problem here is that they’re very serious.

The comedy was terrible here (except for one scene that has to do with paint-ball), which is a given, but it’s when the flick tried to be all serious and mushymushy is where it really made me ticked off. First off, doesn’t anybody think it’s a little weird that these dudes are basically sharing a girlfriend? These guys are best friends and decide to play a little game but I don’t know why anybody would ever want to get sloppy seconds, let alone, your own best friends’. I know that some people out there actually do put down bets on this sort of thing to see who can sleep with the chick first but they aren’t even doing that, they’re waiting to see who she loves first which is pretty cruel and sadistic. The sad part of this flick is that the film’s tone is really playful and acting like this whole thing is a fun time even though anybody who would want to try to bet who can get a girl to love them first, is pretty much a total dick-headed thing to do no matter who you are.

However, it’s not only the guys that are playing this little game, she’s testing it out too and even though I am against that, I still couldn’t believe the fact that this flick tried to get us to feel something for her when everything is revealed to her. This is a chick that chose to two-time, get caught up in both of them, cheat on them both, and basically act like they’re the one, and we are supposed to feel something for this damn chick?!? I don’t care if you want to have fun going out with two guys at once, but don’t start crying about it when it comes right back to get you because that’s when you know that karma is a bitch and frankly, you deserve it.

As for this obviously talented cast, they are pretty much all wasted on a script that has no idea what they’re doing, other than trying way too hard. Tom Hardy is a very strange pick for a lead rom-com role as the sensitive but muscled, Tuck, and this guy tries his hardest, he really does, but I couldn’t help but think that this sort of role just doesn’t fit him at all. I just felt like Hardy was sleep-walking through this role and even though he still has that charm we all know and love him for, I couldn’t help but think that this sort of sweet and relaxed role, just isn’t the kind for the dude who walked around naked for about an hour-and-a-half, kicking the shit out of everybody in his way in ‘Bronson’. Chris Pine is here as FDR (whoever wrote this, definitely was in history class when they were writing this) and does what he always does which is be sly, cool, and sexy enough for all of the woman to want him. He doesn’t do anything different, but it’s not all that bad in the first place either.

Reese Witherspoon is once again playing that ditzy and super-cute blond chick role that she’s been doing in rom-com land for the past decade and she still is alright here as Lauren Scott. Even though this is nothing new for Witherspoon and her chemistry with both is OK (her and Pine is probably better), I still feel like she deserves a meaty enough role for her because she has shown in the past that when she gets those sort of roles, she can do a superb job, but she just hasn’t really had them for the longest time so I guess we’ll have to put up with more of these shitty rom-coms from now on. Probably the best part of this flick was Chelsea Handler as her best friend, and she made me laugh the most with all of her constant jokes and one-liners. I definitely think with a smart script Handler could get her own leading role, but then again, that seems very far-fetched.

Consensus: Even though the leads try their hardest, This Means War fails in almost everything such as a bad direction from a dude nobody likes as it is, a script that feels like it was written in some 12-year old’s journal, and a premise that may be all fun and games when it first starts, has a very dark and mean feel to it deep down inside. Then again though, maybe I’m just a weirdo.