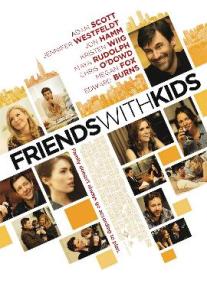 Good-looking people should just stop boning each other if they don’t want kids.

The film centers a group of close friends at a moment in time when children arrive and everything changes. The last two singles in the group (Adam Scott and Jennifer Westfeldt) observe the toll that having kids has taken on their friends’ relationship and wonder if there is a better way. They decide to have a child together and then date other people.

After last year’s sleeper hit ‘Bridesmaids’ came out it seems like every person in the world has been searching for that next big comedy that will not only do well with critics but also the box-office, because we all know how hard that can be…. Of course this idea went right into Jennifer Westfeldt’s head as she got her real-life boy toy, Jon Hamm, to give a call up to not one, not two, but three of his fellow ‘Bridesmaids’ stars and what we have here is anything but that. I mean that in a good and bad way.

Where this film works is in the way that it explores exactly what it’s trying to show and say. I’m not over thirty and I definitely don’t have any kids (that I know of) so this film seemed like it wasn’t going to really connect with me but through this script and all of the funny and sometimes sad situations these couples had to go through, gave me a better understanding of what being a parent in your 30’s is like. You see the couple that loves each other dearly but still bickers over the smallest stuff, you see the couple that were once red-hot every time they were with each other but now can’t stand the sight of either one, and then you have that one “bff” couple that doesn’t let things between them get serious at all and still are able to be cool with each other through everything. This film seemed very true in a lot of things it showed and it’s insight is not only humorous, but can also get somewhat dark especially by the end when a ski trip between all of these pals go sour as one person brings up the other person’s dumb thinking skills when it comes to being a parent. Hey, we aren’t all perfect!

The film has a lot of funny people in this flick but it’s not hilarious like you would expect. There were plenty of moments where I laughed and definitely had a chuckle but those moments were spread far apart from one another and I think it was more of the fact that it’s the cast that had me laughing rather than the script itself, which will probably disappoint everyone who goes out to see this expecting people to take craps in the sink. Then again though, not every comedy needs that.

The film for the first hour or so, feels fresh, somewhat original, and insightful. However, things start to get pretty familiar after this first hour and that’s where this flick started to lose me. It goes down this road of where the two bff’s start to realize that they really do love each other and I don’t think I’m really spoiling anything by saying that either considering it’s pretty obvious just by seeing the trailer.

Being conventional wasn’t just its biggest problem though, it also didn’t help that Westfeldt isn’t very good as a director. There were scenes that I wish went on longer because of how funny they could be and how much energy they had stored in them with all of this talent on the screen together but for some reason, those scenes felt like they were cut short. It may sound like I’m being a tad too nit-picky but I just couldn’t help thinking that if they put this film in the hands of somebody who knows how to film comedians improving without ever cutting away and just letting them rant on and on, then this film would have had some brighter moments, but ended up only having less than I expected.

As for this ensemble, everybody here is good even though I feel like the script didn’t allow them to be funnier and just wanted them to be somewhat funny but more honest. Jennifer Westfeldt has a likability to her that works for her character, Julie, but I couldn’t help thinking that there could have been more spirit in her act; Adam Scott is very good in this lead role as Jason and should definitely get more considering he’s not only funny every chance he gets, but he also can handle being dramatic without stretching his skills too far; Megan Fox is good as Jason’s first very serious girlfriend, and even though it’s nothing too spectacular, it’s still good to see her at ease but then again, I couldn’t help thinking that her role could have been expanded a bit more; and the real stand-out for this flick probably has to be Chris O’Dowd who is hilarious here as the always happy but honest husband, Alex, and worked particularly well as the voice of reason because he was funny but also seemed very genuine with everything else he had to say.

Consensus: Friends with Kids has some good insight, some funny moments, and a good ensemble that works well with this material, but it ends up falling into conventions that not only take away from the first hour but also make Westfeldt’s sloppiness as a director show up a lot more.