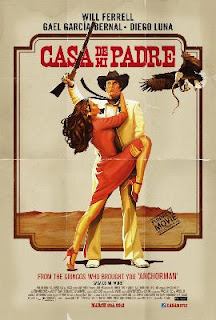 Spanish is such a fun language to speak, especially if your Ron Burgundy.

This film tells the story of Armando Alvarez (Ferrell), a struggling ranch owner whose fortune seem to turn when his younger brother Raul (Diego Luna), a successful businessman, shows up to save the property. But when Armando falls for his brother’s fiancee (Genesis Rodriguez), and Raul’s business dealings turn out to be a bit shady, all hell breaks loose as they find themselves in the crosshair of Mexico’s most feared drug lord, the ruthless Onza (Gael Garcia Bernal).

It seems like Will Ferrell is able to do anything as long as it consists of him doing anything funny or that makes him look utterly ridiculous. This film does both but not as well as I or the film itself would have it liked it being.

This is basically one long parody of those corny-ass, Spanish television shows you would see at around 1 p.m. and it actually is very funny even though it could be said that the film is just using one joke, over and over again. There is a lot that they parody with this flick (all of the sets and animals look so damn fake!) and it made me laugh much like I was expecting. But it’s not just a satire because there are plenty of moments where it seems like straight-up low brow humor that we have seen from certain Apatow flicks. It’s a funny combination of both styles of comedic writing and they both come together pretty well.

Some people are actually complaining about how the script is so dumb, but that’s pretty much the point. The whole film focuses on pointing little jokes here and there at how over-dramatic these certain stories can get and it works in that way. It had me laughing, that’s for damn sure, but it definitely could have had me laughing a hell of a lot more. However, that’s what brings me onto my biggest problem with this flick.

Since the film is essentially a one-joke premise, there is a part where the film really starts to run out of steam and feel as if it was long, extended SNL skit. Don’t get me wrong, I definitely laughed plenty of times but there were other times where I felt like the jokes started either totally missing the mark or just trying too hard to be funny that it almost seemed like the film was actually straining itself. It also gets bad when certain jokes go on a little too long like where they explain what a scene would have been like if it weren’t for the fact that it was a little too crazy for its budget. That may sound funny on paper, and it’s actually funny in the film itself but it runs on just a tad too long like the director didn’t know when it was time to end his punch-line.

What also was sort of a total let-down was the fact that this flick looked like it was going to be one big ridiculous comedy that just got more and more dumb as it went on, but for some reason, I couldn’t help but think it’s not as ridiculous as the plot and advertisements may have you think at first. Of course you have Ferrell speaking Spanish and a whole bunch of other moments where it seems like they are being over-dramatic just to be funny, but for some odd reason it just never crossed that boundary into utterly ridiculous territory. Maybe I expected too much, but then again coming from Ferrell, I should be expecting this sort of stuff. And lots and lots of it.

I must say though, it was great to see Will Ferrell explore his comedic talents with his way of trying to speak in Spanish and even as unbelievable he may be at that language, it still doesn’t matter because he’s very funny playing that lovable, big, goofy dude we all know and love him for. Gael García Bernal is also quite funny as the notorious drug kingpin villain that we always get in these sort of flicks; Diego Luna is having a pretty good year so far with this and ‘Contraband’; and Génesis Rodríguez is so damn hot that I didn’t really pay attention much to her performance rather than just her rack. Still though, good performances from everybody speaking in their native tongue, except for Ferrell obviously.

Consensus: Casa de Mi Padre features some very funny moments that will either leave you crying or just chuckling thinking about it long after the movie is over, but there are times where the jokes seem to go on for too long and the fact that it isn’t consistently funny may be a bit of a draw-back, especially when you consider that Will Ferrell is in it.