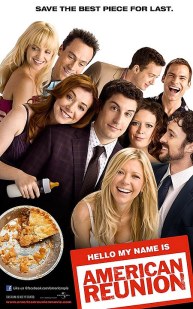 At least my high school reunion won’t be filled with so many pervs. Then again, it probably will.

As you would expect, the plot revolves around the characters getting together for their 10-year high school reunion and struggling against the expectations of adult life. Oh, and there’s Jim’s dad being a total goof.

So after all this time of reviewing all of the past MAIN sequels (not those piece of crap straight-to-dvd flicks), I have to say that I was pretty stoked for this one. I loved all of these characters, wanted to see more of them, and finally got the chance to see them all together once again for their last hurrah and I’m glad to see this, because for some odd reason I have a feeling they’ll be back.

With an ‘American Pie’ flick, you have to realize what you’re getting yourself into right away. Yes, there will be gross-out jokes, there will be a lot of sex jokes, and there will be some way of ladies showing off some T&A. With this latest edition, the film delivers on many of the gross-out jokes as most of them hit with big laughs, while others just get a mild chuckle or two, but that’s better than no chuckle….or two. It was also funny to see this film poke fun at the high schools that we have in today’s world against theirs, and just barely different they are, except for the fact that these kids today are a lot more of assholes than maybe the ‘Pie’ gang was. No, I’m not including Stifler.

People coming in and expecting a whole bunch of emotional and sympathetic moments as if it was a reunion flick like say, ‘The Big Chill’, are in for a big surprise because not much of that is here but when it does come around, it’s surprisingly very good. The film shows us where life takes us sometimes and even though we may not be right there with one another, we all still should be there for each other in spirit. Maybe that was a little bit too weird for this review but you know what I mean. It’s just good to have a reunion flick that at least touches on something sympathetic for the most part even though it’s definitely not as good as the first one in that department.

The problem with this flick is that it is close to two hours, which may be a bit of a stretch even for a flick that is getting back all of its characters. With a tight ninety minutes, this film would have been able to deliver all of the goods on the comedic and sympathetic level, but with this close to two hour run-time, everything starts to feel a bit bloated. There were some subplots that didn’t really need to be around here such as Jim and his neighbor and Finch having problems with his life by the end, but there was still enough to fall back on so that’s all that counts.

Another problem I also felt like a lot of the jokes that they used were a little too centered towards jokes of the past movies, and sometimes they were even reused here again. I don’t know how hard it is to come up with a new dick, ass, or sex joke but once you have to start copying from your own franchise, then it starts to get a little lame but thankfully it’s not a constant or else I would have probably been rolling my eyes the whole time.

Still, when it was all said and done, this flick just made me happy to see the whole gang back together once again. Not much of these characters have grown from the last times we’ve all seen them, but they are still as fun and as lovable as they were then. Jim and Michelle are still married but are also having sexy time problems; Oz is a TV sports writer who appeared on Dancing with the Stars; Kevin is now a stay-at-home husband; Finch is as exotic and cool as he has ever been in any of the past flicks; and of course, Stifler is still a dick head amongst other things. They are all great here doing what they do best, especially Klein who actually found himself on the other end of the joke, which was a real change-up in things from the first two flicks. Oh yeah, and Eugene Levy is back as Jim’s dad and he’s just hilarious. Honestly, what else can you say about him? As for the ladies, they are all back too and make their presence known. Tara Reid is still foxy and trying her hardest to act as Vicky; Mena Suvari looks better now, than she did back then as Heather; and we also get to see Nadia back but this time, with a top on so it was a major bummer this time around. It’s just so great to see everyone back here and hangin’ around again considering all of these cast members are friends in real life so it makes this reunion all the more fun.

Consensus: Though it can drag on too long, American Reunion is still a great way to bring back the lovable and original cast with its usual, funny humor and some ounce of sympathy that makes us feel more about what may happen to us in the future and what we may be seeing at our next high school reunion. But it’s also great to just see all of the characters and cast return, especially if you loved the original American Pie.