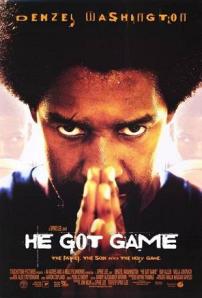 Denzel Washington stars as Jake Shuttlesworth, a prisoner who suddenly finds himself temporarily paroled and with the promise of a commuted sentence if he can accomplish one task: he must persuade his estranged son Jesus (Ray Allen) the number one high school basketball player in the USA – to sign with Big State, the Governor’s Alma mater.

Writer/director Spike Lee has been known to love the game of basketball, but it seems pretty strange that he would almost go as far as actually casting a real-life basketball player in one of his leading roles. It’s also even more strange how much he makes people not want to even think about pursuing their basketball careers considering how much ish talking he does.

No matter what he does in any film, Lee always knows how to make everything pretty. He uses a lot of different lenses that add this dirty and gritty feel but he’s also able to change it up at any moment and place us in a different time and place. Once again, Lee is just playing around with his certain camera tricks and is seeing what he can and can not do, but it still works all of the same and makes Lee the wonder he is usually known as. Well, that is when it comes to his art-direction.

What Lee does perfectly here with his script is that he is able to talk about two different story-lines but have them both come together in the end. Lee satirizes the whole art of a celebrity where we see Jesus going from person, to person, to person and being asked the same damn thing as to where he’s going and if they can get some pieces of that pie. We get to see how much promises people actually make to Jesus just to have him play some b-ball at their universities and the way Lee shows this in a more grotesque way than ever before, is a real surprise. Lee exposes the underbelly and daily happenings of what happens in college recruiting and how much pressure this can put on that high school basketball player themselves. Even though I don’t play any sports (does Ultimate Frisbee count?), I can definitely say that I’m glad I don’t have to worry about getting all these offers, promises, and calls either.

At the center of the flick though, and where it really works, lies within the father-son relationship that just gets better and better each and every time these two show-up on-screen together, which is a very rare thing here. We see how much of an impact Jake had on his son’s basketball playing skills and as much as Jesus wants to deny it and push himself away from his father, he can’t escape the fact that it’s his father who made him the man he really is today. Lee’s script touches on a lot of points about family, moral issues, and staying loyal but I think it was the fact that Lee chose to show this hurt relationship these two had in such a compassionate and realistic way is what made this flick ten times better than your ordinary sports movie and a hell of a lot more emotional.

My main gripe with this flick is that I do think that the ending was wrapped up a little too well for my taste. I get that the film was definitely trying to appeal to the natural audience that wants to see a happy ending but Lee could have done so much more at the end, that could have really made this film’s ending emotional impact stick on you. Still, don’t get me wrong when I say it’s a happy ending because it still is a little dark and sad but nothing that you would really expect from the dude that showed us Radio Raheem getting his ass chocked out.

Denzel Washington is once again playing another great role here as Jake. This is one of the first roles that shows Denzel in a very subdued and laid-back feel rather than being that hero type and going all-over-the-place with his emotions and it’s also one of those rich performances that gives you the kind of comfort that you should feel whenever he’s on-screen. The character he’s playing may be a guy that is obviously effed up in the head, but he is also a guy that you know is good and only wants to do the right thing which is what makes this character so much richer and better, especially because he’s being played by the man himself.

The one performance that I was really surprised by was how good Ray Allen was here as Jesus (yes, that really is his name). Whenever people see that a first-time actor is given his chance for a lead role, they usually shriek and see horror happen right before their eyes but somehow Allen makes me think otherwise about that idea. Allen was a great pick because he shows a character that is obviously very angsty, very confused, and very angry at everyone around him and Allen shows that perfectly on-and-off the court. Even his scenes with Washington feel real and it’s a real wonder as to why Allen didn’t get more acting roles or even go for other ones during his off-season. At least he has a championship under his thumb now but whats better: Oscar or NBA Championship? Hmmmmmm, I think I would go with the first.

Consensus: Though it may end a little too neatly, He Got Game is a film that not only looks great, but also has a real emotional story at its core and works with just about every point it’s trying to make, even if it does sometimes get a little too over-stuffed. Then again, that’s what we come to expect from a Spike Lee joint.