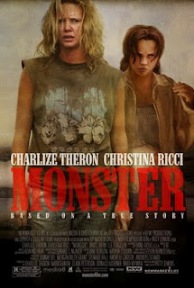 Charlize Theron would definitely be the #1 hooker in America, but not #1 serial killer. Then again, she was both and she didn’t look like her normal, sexy, beautiful self.

Charlize Theron stars in true-life story of Aileen Wuaronos, a prostitute executed last year in Florida after being convicted of murdering six men. While Wuaronos confessed to the six murders, including a policeman, she claimed to have killed only in self-defense, resisting violent assaults while working as a prostitute.

So it seems like this Aileeen chick isn’t a real peach in the first place but the hot and sexy South African Charlize Theron is playing her, so it she can’t be that unbearable, right?

Writer/director Patty Jenkins tells this story in a pretty straight-forward way that doesn’t get in the way of anything here and that’s not so bad. Jenkins does do a nice job of showing us the dark and light side of Aileeen, and instead of just focusing on what we think she was like behind all of those murders, we get to understand her for a person that has been so knocked down by men and society, that the only possible solution could be is murder. There isn’t any real terribly graphic stuff to see here in the first place, but the film has this dirty/gritty look that takes you into the world that Aileen herself lived in for so long too. Still a surprise that Jenkins was actually going to direct the sequel to ‘Thor’ because the only action here is basically Theron holding up a pistol to some dudes’ head, and that’s just about it.

Since this is an actual serial killer, it’s somewhat hard to get involved with this story as well as Aileen, considering we know what she did and she had no problem with it either. Serial Killer movies can only do so much because they show you what actually happened with some character development to even out all of the grisly details, but it’s pretty hard to do that when the character isn’t a person that you can totally get behind. I mean yeah, she’s a hooker that has to kill these dudes in order to live for herself and her girly-friend and only does it because she had a messed-up childhood but she could honestly choose something else as a profession. The film shows her trying her hardest to actually do that but I honestly couldn’t have any sympathy for this girl either because even when she did get the moolah, she spent it all on cigs, beer, and occasionally a new place to stay.

I also found it a little strange that there is barely any light moments that occur during the last two acts of this flick. There is a pleasant love story that takes over the first two acts and it has it’s fair share of joyful and amusing moments to cheer us up, but it almost feel like it was just in order to get us ready for the dramatic and dark territory we were about to venture into. I don’t think all films about serial killers and murderers need to bring some light to the topic just in order to keep my attention, but the film just started to lose my interest a bit more and more as it went on.

Charlize Theron definitely deserved the Oscar back in ’04 for her role here as Aileen Wuaronos, because she totally gets lost in this insane and crazed, real-life figure. Her performance aside, the physical transformation she goes through is absoloutely stunning because this is what Charlize Theron looks in real-life, and this is what she looks like as Aileen. See the difference? It’s crazy how they got Theron to look so damn disgusting and gritty, but it’s also even crazier how amazing Theron is here as well. Theron jumps into this role at a 100 mph and never lets loose. She’s a very freaky gal that will definitely give you this tense feeling whenever she’s picked up on the side of the road and Theron is great at showing us just how intimidating a one-lady killer can be. Theron also has some real emotional scenes that may not have you win over any sympathy for her character, but they are still great scenes none the less and you start to realize that this Aileen chick, is a lot more human than the media may have you think so. Don’t really think I would pick up a chick that looked like Aileen and do a little something something, but then again, many other people would.

Christina Ricci is also very good as Aileen’s young and spoiled lesbian lover, Selby. Ricci looks nothing like the real chick, but she still has the emotional chops to carry her performance throughout the whole movie. Their love also works because you can feel that these two actually have something going on between them, even though one of them is serial killer. Good chemistry between two chicks that are usually hot in everything they do, but here, I didn’t think of them like that once.

Consensus: Monster features an amazing performance from Charlize Theron, that commands the screen the whole time she’s on-screen, but the rest of the flick is sort of lackluster and definitely isn’t as interesting when it comes to plot development since we all know how it ends, and also that everything is pretty damn grim.