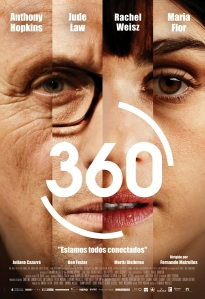 Sex is apparently everywhere, especially when you’re on a computer.

This is a story about a series of different characters, that are all interconnected by one another through the subject of sex. That’s right, sex is everywhere. People have it, people do it, and there’s no escaping it no matter who you may meet in the world.

With a cast with 3 Oscar-nominees (fairly recent, too), director of one of the best flicks of the past decade (City of God), and a subject that seems universal discussed and portrayed (sex), you would think that a film like this would have no problems making it to theaters, kicking some box-office bootie, and even get some “talk” come Oscar-time. However, it’s able to be viewed by Video On Demand now before it’s limited theatrical release. Hmmm….

Maybe it’s just that I’m a sucker for these kinds of flicks in the first place (interconnecting story-lines), but there was something about this flick that seemed to be working quite well. First of all, director Fernando Mereilles is definitely not the type of director who just lets his story get in the way of his style and as bad as that may sound for most directors, it’s not for this guy. There’s not much style to actually been seen here in the first place, with the exception of a couple of cool split-screen tricks that show about 4 stories at a time, but he does allow there to be enough room for compelling stories, even if they aren’t all that way.

One story, in particular really kept me intrigued the whole time just to see how it played-out in the end, was the story that began with Anthony Hopkins connecting with a young Brazilain woman on a plane. Hopkins has always been one of the best actors to ever grace the screen in the say, past 20 years and he shows that type of skill with his performance here as an old, but wise man that knows the mistakes he has made in his life and doesn’t want others repeating them, either. There’s a lot of restraint in his performance, that may separate it from a lot of his other performances but I really can’t remember the last time I saw Hopkins get a role so meaty quite like this in a long, long time. That story soon starts to follow the young Brazilian woman (who is good, but I don’t know her name) as she meets a recently released from prison pedophile, played by Ben Foster in what I think is a role that shows his true talents as a dramatic actor.

Foster has always been on the g0ods with me ever since I first saw him beat the shit out of everybody in Alpha Dog, but this is where he proves me right in saying that this guy could very well be a huge name in Hollywood, he just has to be given the right material. Foster plays a man that is so trapped in a body and mind that he can’t seem to control at all, that whenever he’s on-screen, you feel like this guy is going to crack and you don’t want him to not just because he may be a little messed-up in the head, but because you generally feel like he’s a good guy. And it’s all played out very subtle, to where you don’t know when he’s going to crack and how but little things he does, just have you thinking the worse.This performance reminded me a lot of Jackie Earle Haley’s in Little Children, but they both seem very different in their own rights and both convey very different emotions right from the start of the flick. Foster makes this story compelling as it unfolds and watching him was the real treat of this flick.

As for everybody else in this cast, they’re alright, too, along with their stories. Lucia Sipsová plays a Slovakian prostitute and has a pretty interesting story-line that spins off another interesting one and Rachel Weisz and Jude Law have a so-so story as a bored, married couple that seems to be at the end of their road with one another. Both stories are well-acted, but certainly don’t get enough screen-time as they should, especially Weisz’s and Law’s that seems to start fairly late in the film, but somehow end very early, as well. Mereilles runs into this problem a lot with this flick a lot because even if some stories are very interesting, they aren’t allowed enough time to develop and have it’s characters gain our sympathy just yet. Not every story is a miss, but there aren’t as many hits as there should be anyway.

But perhaps the biggest problem with this flick that I had was the subject-matter itself: sex. Right from the very first shot, I thought that this was going to be one of those racy, dirty flicks about how people in the world just can’t get enough of sex and where they will go just to get some of it. Almost sounds like Shame, if Robert Altman had directed it but I can assure you, that the idea of that actually happening is probably a lot more interesting than anything this flick has to say about the subject of sex. Yeah, we get it, people do bad things when it comes to sex. Some make a living out of it, some get in trouble for it, and some just can’t get over their infatuation with it and even though the film teeters on actually doing something risky with this premise, it never fully delivers. Instead, this film just gives us a bunch of stories that will make you think of something while they’re going on but when they’re off the screen, they’re out of your mind and out for good.

Consensus: With an exceptional amount of good stories and performances from this large, cultural cast, 360 does deliver on giving us a drama that keeps our attention but when it comes to providing us with some major issues and themes about the world we live in where sex is everywhere? Nope, not really there.