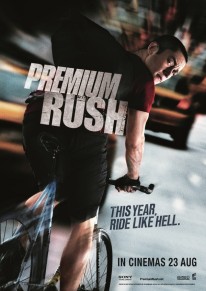 Delivery by car is so mainstream.

The movie stars Joseph Gordon-Levitt as Wilee, a bike messenger who sees a routine delivery turn into a life or death situation through the streets of New York City. Michael Shannon also shows up as a crooked cop who is after the content of one of the package Wilee is carrying.

Even though this one has been sitting on the back-burner for over a year now, I was still looking forward to it because it’s a new, clever-take on the whole action genre that seems to get very tired after all of the Summer blockbusters have come and gone. Yeah, urban biking may not be the most exciting thing to watch on the big-screen, but at least it’s somewhat new, and features JGL and crazy-eyed Shannon. What could possibly go wrong? Well, to answer that question, I would have to say a whole lot.

Writer/director David Koepp seems like he has his head on-straight when it comes to the whole action element of this film, but with everything else, it seems like he loses it. The biggest problem with this film is the plot. At first, the film starts off with a bit of a mystery angle where you have no idea why this one crazy asshole is chasing after this biker for one little piece of info but after awhile, we start to find out and that’s where this film really goes down the tubes. Apparently, the Chinese mob gets involved, an illegal deportation shows up, a character’s gambling problem comes out of nowhere, and then of course we have the romantic-love angle that seems more forced than ever before, and it just adds another unneeded piece of a plot for this already stacked story. Without giving too much away, certain things in the story just don’t add up and I think Koepp’s intentions were to just have us forget about it and focus on the cool action. Sadly to say, it doesn’t happen.

Then of course, there’s the parts of this movie when the characters actually talk. Woah nelly! Holy shit have I never laughed so hard like I did here before in a long, long time. The problem with this script is that every line is a total cliché and doesn’t do anything, but make this film seem more like a laughing mess than it already was. This one scene in particular where JGL is chasing after his “biking buddy” in order to get a package from him, and even though it is a thrilling scene that takes place all throughout NYC, all of the cheesy-ass lines these guys exchange with one another was enough for me to just start laughing and focus on what these guys were saying, rather than what they were doing. This isn’t the only time it happens, but this is the one time where it was freakin’ unbearable to watch or listen to and it just gets worse and worse as the story continues to develop (and make less sense).

But, what really saved this film from being a total piece of crap after all, was the action Koepp brought here. Urban biking seems like a pretty exciting activity to do, especially when you’re in the busy-ass city of New York and that’s why I like how they captured all of that into this film. There’s plenty of scenes where we follow JGL going down the streets at crazy speeds, where it almost seems like he’s going to lose his head any second, but somehow, pulls out at the last time. A lot of these scenes have tension to them, but Koepp gives them a playful style whenever he shows JGL’s mind making up what move he should pull next. It’s a pretty neat trick they pull with this film, and what’s even better is that all of the action and bike-riding throughout the streets is mostly stunt-work, which means less CGI. Such a relief to see a film focus on that aspect of an action film, without feeling the need to try and enhance the shit out of it with a computer.

Another part of this movie that sort of this saved this movie was the two fast-rising stars in the leads. After a white-hot role in The Dark Knight Rises, Joseph Gordon-Levitt gets to show off his skills as an action star more, with his charm still deep in-tact. JGL definitely isn’t wasted here because he’s in plenty of shots and gets to use his likability to his advantage, but you also can’t help but feel that this flick was made a very long time before anybody thought he was going to be as big of a star as he is now, and this sort of comes off like a lame role for a guy who can’t really afford them as of right now.

The same could almost be said for Michael Shannon who has been kicking asses for the 5 years in smaller, indie-roles but now is finally getting the chance to break-through in the mainstream crowd. Sadly, this is probably not the movie to do it since the whole time, he just continued to make me laugh. The script here is so atrocious that every line of dialogue that comes out of Shannon’s mouth, just makes him seem more and more like a cartoon villain, rather than a real-guy, who could literally make your life a living hell. It’s weird too, because the guy starts out as this calm, collective villain that says things very slowly, but then changes out of nowhere and just goes haywire with his act, almost like Shannon flipped a switch off in his back right in the middle of the movie. Some may call this a fun performance where he just chews up scenery like nobody’s business, but I call it a role that starts to get way too over-the-top, way too quick and it’s hard to watch or listen to after awhile.

Basically, if this film came out about 2 years ago, which I think it was going to do, then it would have been fine because these guys weren’t as huge of names then as they are now, but since it is out when these guys are somewhat large stars, it’s a huge disappointment and shows that these guys may have to watch the next script they read. But, something does tell me that this may not happen again and it was only a coincidence that this piece of shit had to come out now.

Consensus: Premium Rush gives the audience the type of escapism fun that they need around the dog days of August, but almost ruins itself with a convoluted plot, over-the-top acting from Shannon, and a terrible script that just gets worse and worse as it goes along, almost until the point of where you just want these people to just ride their freakin’ bikes and shut the hell up!