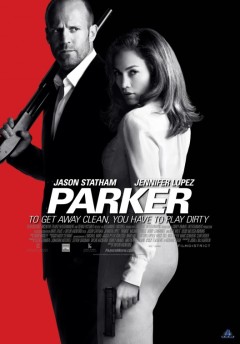 Parker (Jason Statham) is a professional thief, who doesn’t steal from the poor or hurt innocent people. However, all of his skills and professionalism runs into problems when he’s not only betrayed by his fellow criminals, but also has to take under a woman (Jennifer Lopez) for leverage. Since they’re both hot, you can already assume what’s going to go down between them next. Ohhh yeah.

I don’t think I’m alone in the boat when it comes to my opinions of Jason Stathom, action-vehicles. Yeah, they are all the same in the way that they are just loud, stupid, and just meant to show-off Statham’s rockin’ bod, but none the less, they are also quite fun and can be a lot better, if done the right way. Adding director Taylor Hackford (the guy’s made some great flicks in the past, but being married to Helen Mirren I think takes the cake on that career), a little bit of J’Lo love, and a bit of source material from the wonderful-mind Donald Westlake may make it seem more than just another action-vehicle for the dude. Sadly, it is exactly what I expected but a tad better than we are used to seeing and hey, in the month of January, that is not bad at all.

Most people have been bashing this movie for everything that it is, but I think most people are getting by the fact that it’s meant to be stupid, loud, and fun, without really having to worry about being different from anything else that Statham has ever done in the past, characters and movies-wise. Take for instance the character of Parker: he’s supposed to be the perfect anti-hero that does bad things, but also has a certain likeness to him that shows you he doesn’t kill innocent people, and only takes the money away from the baddies. Seems like an alright dude, even if he is stealing and committing crimes, but an alright dude none the less. However, that whole idea of having Parker play-out as an anti-hero, totally goes out the window after the first 15-minutes where he’s apparently back-stabbed, shot, and left for dead (not a spoiler, it’s all in the trailers, people!). Instead, he’s just Jason Statham, doing Jason Statham and that’s not such a terrible thing when the guy is as committed as he is in all of his action movies.

Statham is one of the last, or very few guys left in Hollywood that’s dedicated to doing lean, mean action-movies where he does all of his stunts, all of his work, and basically, anything that he’s asked to do. Here, he’s just playing himself and is charming, as always, and can handle himself when it comes to getting dirty and physical. He’s okay, and so is J’Lo who shows up as the real-estate agent who’s sad, lonely, bored, annoyed by her stereotypical, Latina mom, and even worse, pushing 40. J’Lo has never been a favorite of mine but she’s fine here and brings out some real fun and energy in a role that could have just been played so plainly and boring, just so all of the focus could be on Statham and all of the insane-o shit he does as an action-hero. I was a bit bummed to see that these two didn’t have much chemistry going on between one another, not just in the story but the performances as well, but I also think that Hackford sort of got that right from the start, decided to scrape it, and have some fun with this movie. Fun, is exactly what occurs.

The movie is definitely an action-flick that’s for the people with little to no brains, who just come for the popcorn, the soda, and the fun, but it’s a tad bit more than that. It’s actually sort of a heist film as well, where instead of seeing a bunch of brawls just happen out of nowhere, we actually get to see some crimes go down, the professional-way where everything is planned, everything is executed, and everything is pretty damn suspenseful  I’m not going to lie, I sort of did know how this was all going to end at one-point, but the thought in my mind that this movie could go anywhere with it’s characters and plot, kind of did keep me on-edge through a good-portion of this movie, even I did expect the cliches to start coming-through, as-soon-as-possible. But, then again, this is what we have come to expect from a Statham-actioner and there is a certain essence of joy and delight in that idea.

However, this flick is exactly what you would expect from a movie starring Jason Statham, and anybody going into this, expecting anything more, will most likely be pissed-off and terribly disappointed. I don’t know why you would because when you see the name “Statham”, you automatically just think loud, dumb, action-movie that only d-bags would go out and pay money to see. I didn’t pay moolah to see this movie, but does that still make me one of those d-bags? But I digress. If you go into this movie expecting anything new, improved, or original coming from the mind of Statham, you’re going to be ticked-off. As simple as that, people.Actually, I would probably say the worst-aspect of this whole movie isn’t just Statham, but it’s more or less the supporting-cast that surrounds him as they don’t really even seem like they are trying. And if they are, then shit; they just blow!

The main baddies are played by the usual people we see play these types of roles like Micah A. Hauptman, Michael Chiklis, Wendell Pierce, and of course, Clifton Collins Jr., who is probably playing his 500th villainous-role in his whole career. All of these guys try their best with whatever they can muster up, but it just isn’t enough since the script is so lame, and their action is so off-key. And by “off-key”, I don’t mean that they don’t hit the right notes they are supposed to hit like if they were a singer who just became deaf, but more or less that they are just actors that don’t know what type of roles they are playing, and instead of playing in a small type-of-way, they are so over-the-top and outlandish, it’s almost laughable to watch. Seriously, the first 10-minutes of this movie made me and my buddy just sit-back in our seats and laugh our pants-off by not only how ridiculous everything was, but just by how terrible these actors are. And maybe it’s not that they’re bad actors, it’s actually more that they were just not good for these roles and could have probably been played by guys who don’t give a shit about their careers. I guess Collins Jr. counts then, right? Also, Nick Nolte appears here as Parker’s sort-of mentor, who growls his way through another performance. Oh, and he also drinks in this one, too! Good to know you’re helping your image out, Nick!

Consensus: If you know what you’re getting yourself into when you walk through the doors of a movie starring Jason Statham, then you know exactly what to expect from Parker and that is loud, unpolished, and unapologetic joy and desire to have a good time, even if it is nothing new or refreshing that you haven’t already witnessed before.