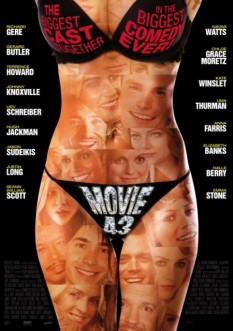 Not all celebrities are prudes. Only the ones with Oscars are.

The central story is about how a deranged writer (Dennis Quaid) forces a studio executive (Greg Kinnear) to make his movie. But before any moves actually take place on it, we get to see what the actual-product is as the writer reads it out to us and the executive. Basically, it’s just one dude’s shitty idea, all for us to see and cringe at. Yay!

Sketch-comedies never seem to work, that is, unless you just so happen to be drunk, horny, wild, and ready for a good-time. However, I don’t think it will matter if you’re any of those things: you may never, ever enjoy this movie. Okay, maybe if you’re 12-years-old, and love to hear the word “balls” in almost every sentence  then yes, you might just have a freakin’ ball with this thing. But if you are above that age-limit in anyway, shape, or form, this is going to be one cringe-inducing trip for you. Whether you like it or not. I’m going to guess your most likely to side with the latter.

Any movie can tell a ball, poop, or fart joke like it’s nobody’s business, but it’s all how you do it and literally; this film just cannot do it in the right way where you laugh, chuckle, or even get that they just made the joke. Almost every single skit in this movie has at least one use of the word “ball” or “shit” and it gets annoying, probably around the time the first skit kicks-in and you realize that you’re going to be tormented to the core of your stomach, with non-stop raunch jokes that do nothing. Apparently, everybody who ever worked on this movie, all thought that the idea of somebody having a certain bodily-fluid sprayed all-over-their-face was downright, hilarious and it’s a huge-shocker that it never dawned on any of these people that maybe, just maybe, the type of material that they are working with, just isn’t funny enough to suit a 6-to-7-minute sketch, let alone a whole movie full of ’em.

And also, the idea of having a movie so chock-full of sketches where big-named stars just demean themselves to the lowest, common denominator, almost seems so old-school, it’s not even worth it paying the money to go out and seeing. I mean, you can probably go onto Funny or Die, College Humor, Cracked, or even YouTube for that matter, find big-celebrities, doing some crazy shite for laughs, and actually having there be; ACTUAL LAUGHS. Here, in this movie where it’s just one, long presentation of a bunch, you get probably one-or-two laughs and that is literally all because the jokes that they use in the film that are actually funny, were already used 100-times before in all of the trailers/commercials we have either seen or heard, 100 times before. Going out to see this movie is already a crime, but actually going out to pay for it, is like a freakin’ cardinal sin. Especially when you know that more-quality humor is laying right there for you, at your fingertips.

Even if the delivery is god-awful, at least some of the placement is okay. For instance, some skits actually seem to have some promise like the one where Robin (Justin Long) actually stands up for himself and gets involved with a Superhero speed-dating event, where other, actual superheroes show-up to mingle and hopefully, get laid. This idea seems like it’s planned to be a butt-load of fun, especially if that idea came from Joss Whedon, but sadly, it comes from the makers of this shit-pile and before you could say the word, “kryptonite”, the sketch has already lost itself in saying the word “bush” or “shit”, one way too many times. I mean, when you got Wonder Woman and Batman talking to each other about how they fucked and it never amounted to anything but Batman running-away and never calling again, you would expect non-stop hilarity, right? But nope, instead it’s all about having Robin still be played-out as the softer, gayer-one of the two and if you didn’t think that joke was over-played by now, trust me, just wait for the rest of the movie.

However, without the promise of an interesting-idea, most skits just fall from grace, right from the very start. The skit where Johnny Knoxville and Seann William Scott both find and capture a leprechaun (played by Gerard Butler, in CGI-form), in hopes to get some gold, starts off pretty bad. Apparently the director, Brett Ratner (in case you haven’t been surprised yet), thought that the idea of having a leprechaun spew-out a bunch of dirty words was funny enough to last a whole sketch, especially one where it seemed like it’s main actors would actually sparkle in. Sadly, they just don’t do anything for the sketch, or the movie itself and the way it all ends is so dark and savage-like, that it really left me with a bad-taste in my mouth, which is very shocking since the rest of the film just couldn’t. I want to spoil the ending of that sketch for you so you understand what I’m blabbering all about, but sadly, I am a critic and I have morals, people. But still, don’t see this movie because I won’t spoil it for you.

The idea of having all of these different stars being packed into one movie where all they do is completely raunchy and dirty shit (sometimes literally), may make them seem cool and on-the-edge, but in reality: it’s just a poor-decision. I guess it’s really strange to see heavyweights like Kate Winslet and Hugh Jackman in a skit about a dude with balls on his neck, or a skit with Liev Schreiber and Naomi Watts playing parents of a home-schooled kid that give him the full, high-school experience with sex, drugs, abuse and all, but it’s even stranger to see peeps like them actually stoop themselves so low as to actually make this material work. I don’t know if they knew this right from the initial script-read, but this is terrible-material they are working with here so instead of giving it their all and actually going to town with whatever energy or sense of purpose they can muster-up to make this work, they seem almost as if they forcing it out, almost like a kidney stone (and yes, it is THAT painful to watch). Nobody here really out-shines the other and probably the only person that really made me laugh and surprised the hell out of me from this whole cast was Will Sasso, who shows-up, does his thing, reminds us that he is still alive, and actually made me laugh. I was terribly and utterly surprised, but he was the real spectacle to see for me. Everybody else can suck my nut because I hated this shit, and I hated watching them try to act in it!

Consensus: Do not, I repeat, DO NOT let the star-studded cast fool you, Movie 43 is one hell of a bombshell that begins on a lame-note and ends on an even-worse one that makes you feel like you’ve just been hit over-the-head with somebody’s foreign parts, and not in the fun, or pleasureful way, either. It’s the type of way that disturbs you and scars you for life. That is, until you see an equally as bad movie and that’s, going to be very hard to come by for some time I think.