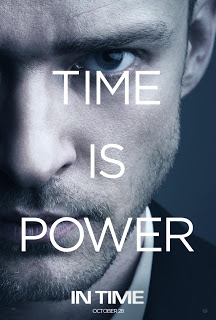 Not only do you stay the same age for the rest of your life, but you always stay sexy and gorgeous. Yay!

When Will Salas (Justin Timberlake) is falsely accused of murder, he must figure out a way to bring down a system where time is money (no, literally) enabling the wealthy to live forever while the poor, like Will, have to beg, borrow, and steal enough minutes to make it through another day. Along with him, he takes Sylvia Weis (Amanda Seyfried), daughter of one of the wealthiest men alive, and they venture out to change the world, they once knew, and try to make it back to the way things once were before.

In today’s day and age, hearing the term “time is money” seems very relevant and places you in the world we live in where the rich get richer, the poor get poorer, and cash is getting harder and harder to acquire. It’s a mess of a world we live in and it’s another perfect opportunity for Andrew Niccol to capitalize on and make a great sci-fi future about, just like he did with Gattaca. However, comparing those two seems a bit mis-matched, as one plays out like an actual drama, where this is just guns, chases, women, sex, and money. Lots and lotsa money.

What I liked most about this flick was the set-up and premise from Niccol. He takes you into this future where everybody is practically living day-to-day, working their asses off just for another hour, and people don’t waste any time at all with what it is they do, so they just run just to keep up with time. It’s a pretty neat premise that Niccol shows and actually spends a butt-load of time developing it, showing us the perks, showing us the obvious cons, and also letting us know how people get by when they live in a world like this. It also looks gorgeous with some really lavish production designs and something about those cars that combine a futuristic look, with a 70’s grindhouse-car look and made them look so cool and retro, but something I’ve never seen before as well. Either way, this whole world that Niccol put me in was really cool but it only becomes a total shame when things started to change right in the middle, and not for the best, either.

The film changes it’s tempo from this dark, brooding drama about a messed-up future, to a slam-bang, action thriller where two Bonnie and Clyde-types are going around, shooting people, taking time, and trying to save their own time as well. You would think that with a good chunk of this film surrounding two people, running for their lives as their clock ticks and ticks away, there would be a lot more suspense and momentum to this flick, but I never felt it. The pace should have been more frantic, where you felt like these characters could have timed-out at any second and even though there were some parts where that feeling came over me (last 15 minutes were pretty damn tense), it sure as hell wasn’t enough especially when you take into consideration that the last hour is dedicated to it.

This film is also terribly silly, but not in a good way, either. There’s a lot of lame dialogue used here where characters use all of these dumb time puns and the usual corny, action bullshit where you have JT saying that he’s going “to take their time back”, and all that lame-o crap that we hear in every sci-fi, action film. But this time it’s different: because it’s all about time. Honestly, if I heard “cleaning one’s clock” ever used again when somebody said they were going to kill somebody, I was going to rip out all of the alarm clocks from my house, get a hammer, set them down, and smash every single one to pieces until I couldn’t hear a ticking noise! And yes, even the ones on the microwave and stove as well! Sounds dramatic, I know; but it gets so annoying after awhile. Just trust me on that and be ready to check-off every “time” pun you can find because I don’t think you’ll have any left by the time this is over. See what I did there? Okay, I’ll shut the hell up now.

But the idea of how these people actually lose and gain time was pretty silly as well, if not fully realized to its fullest. I’m not a big mofo when it comes to movies not making any sense or seeming illogical in terms of plot or character-development, but when a flick like this depends on it’s tools and methods, I have to expect a little something more in the plausibility department. Think about it: the only way to gain and lose time in this future is by touching arms together. That’s it. The way a person can save your life is by basically, taking your arm, saying how much time to give away, and holding it for about 5 seconds or so. That’s pretty much all there is to that idea and it would seem pretty easy to steal anybody’s time just by walking by somebody and taking their arms, regardless of if they want you to take their time or not. Maybe Niccol didn’t fully think this stuff through, just maybe.

If anything makes this film a lot better, it’s the action and the cast that this film has assembled. Since every character in this film has to look either 25 or younger, it seems like a very big stretch for this film to get people that look this age and I don’t think one person in this film was actually that age, but they all do fine jobs with it. Justin Timberlake is fine in one of his first starring roles, playing a very serious and heroic-like character as Will Salas. JT does his best with this material and even though a lot of the lines he’s given are terribly corny as hell (yes, I speak of the “time” puns), he still works through it and makes a realistic/sympathetic character that we can all stand behind easily. Amanda Seyfried begins, at first, by playing his damsel in distress that seems to just want to go home back to her rich mommy and daddy, and live the life she’s always wanted to, but that surprisingly changes when we soon start to see her and JT connect with each other, which is where her performance seems to get better. Their chemistry is very good together and I could actually buy them as love interests, as well as two bad-ass rebels that wanted to take down “the man”. It’s also surprising that I believed them as a couple because they rarely have any actual love scenes together, and even when they do, they are always rudely interrupted by the dickhead time-keeper; Mr. Cillian Murphy himself.

One of the more distracting aspects behind this flick is that 35-year old Cillian Murphy looks the oldest out of this whole cast, but other than that, is still pretty good as our “villain”, Raymond Leon. I use quotation marks around the word “villain” because the film never really seems to decide whether he’s a troubled, government worker that is just doing his job, or a guy that is truly a bad soul that just wants to make people’s lives miserable. That aspect of this character is never fully realized until the last couple minutes or so with him and it’s only because of how good Murphy is at playing him, that I can forgive the film for this mis-step. The actual villainous villain in this flick is played by Alex Pettyfer, and after seeing Magic Mike and loving him in that, I was really happy to see this kid here give a pretty good performance as a dude that goes around, killing people, and taking their times right before he does so. Such a baddie!

Consensus: The set-up and initial-pace from Andrew Niccol, has In Time start off with plenty of promise, but it soon falls down after about an hour or so, where the film goes from a thriller that features no real thrills, no real suspense, and a whole bunch of corny-dialogue that makes you feel like this film was supposed to be made way back in the 80’s, when these films made killings at the box-office. They still do now, but not as much as that lame decade.