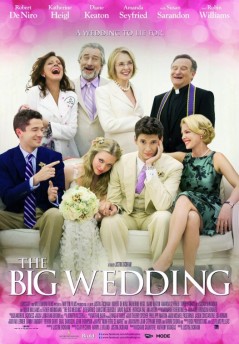 Now I know why I’m single, but steady. Ladies?

Alejandro Griffin (Ben Barnes) and Missy O’Connor (Amanda Seyfried) are getting married. There seems to be no problem with two, young lovers wanting to get hitched, except for the fact that Alejandro’s family is anything but functional. His dad (Robert De Niro) and mom (Diane Keaton) have been divorced for over 20 years, while he lives with (Susan Sarandon); his sister (Katherine Heigl) pukes at the sight of kids; and his bro (Topher Grace) has yet to settle down and lose that V-card of his. Oh, and if that didn’t suck already, his “real mom” is flying up for the wedding but is extremely catholic so Alejandro has to make sure that his real mom and dad act as if they are still married. Hilarious hi-jinx ensue, as you could imagine.

Since it is ripely considered “wedding season”, it’s more than obvious that Hollywood would take advantage of this time and start popping-out all of the wacky and nutty wedding movies, that were meant for those older-peeps who don’t care much for weddings, or those single peeps who are lonely and in need of some reassurance that they will find that special someone and have a beautiful like this one day. Maybe. I’m in the latter and I still feel no reassurance. Nor do I really need it. I’m flying solo forever, baby!

Going into this movie, I knew it was going to be terrible but here’s the thing about me: I like weddings, I like movies about weddings, and I like to watch a dysfunctional family act like asses around one another. I don’t know what it is about me but the idea of being around a bunch of family members that are as fucked-up as mine, really puts a smile to my face and a pen in my hand so that I can finally get to writing that note for Santa’s wish-list of a better life (it will happen one day). But this movie just isn’t what I wanted. Not at all.

As usual, movies like these try so damn hard to be funny, that they almost sprain themselves on the way down. This is one of those movies, but it isn’t as painful as I may make it sound. Granted, it is a pretty bad movie that isn’t really funny and totally has problems with it’s editing (more on that ish later), but it can be pleasureful if you are really, really lonely. And I mean: REALLY LONELY. Like, not a single member of your family is alive to remember your face or who you are. You may have an Uncle, Aunt, or Grandfather that may be going a tad crazy and lose sight of whether or not you’re the grandson or the dog, and that counts. But seriously, this movie is meant for those people who can’t enjoy and celebrate a wedding with friends or family. The only way you can is by watching actors and actresses (aka, really good-looking people), act as if they are all family, love each other, but also love to fight even more. Yep, THAT LONELY.

Sometimes it’s funny, and sometimes it’s not. That’s usually either hit-or-miss depending on the type of person. But what no person can deny is that this movie is terribly-filmed and edited. Now, I don’t know about anybody else, but I remember this flick was supposed to come out around some time last year, because the trailer hit, and so did the poster, but no release date. But considering it was so early, everybody assumed it was going to come out in 2012. Whether or not it’s all true, doesn’t matter because this flick has definitely caught some fire and wind in the editing-room. Woo-wee!

The problem with this movie and it’s editing is that it feels as if somebody didn’t quite know what movie they wanted to make. So, instead of keeping the comedy and drama elements splish-splashed together for evenness, they just go straight for the comedy, all in a row, without any drama or anything. I wouldn’t have minded that so much if it was funny; but it wasn’t. By the end, the problems start to become even more apparent once people start revealing stuff that would change one person’s life in a heartbeat, but somehow has no effect whatsoever on that person. I don’t want to drop down to spoiler-territory, but it’s really random, stupid, and odd how kosher this flick seems to be with certain things like adoption and not knowing who your real parents are. Not saying adoption is weird, but something about this movie makes it seem weird. Oh, who the hell! Just watch it if you want to see what I mean!

If there is any saving grace to this movie, anywhere at all: it’s the cast. After turning out an Oscar-nominated role in Silver Linings Playbook, you’d automatically assume that it meant Bobby De Niro was with a new agent and back in full-force. But I was so, so, so, so, so wrong. De Niro isn’t bad here, it’s just that his character of being a womanizing-perv doesn’t quite work for the guy as well as it might have about a decade ago. Now, it’s just over-played, stupid, and a bit creepy considering all this dude wants to do is bang someone or something. Diane Keaton plays his estranged ex-wife, and is fine for what she needs to do but is simply phoning it in as if she just wants the lovin’ from Warren Beatty or Woody Allen back. No matter who she chooses to have back, she’s going to get some lovin’.

As for the kiddies, they are all fine, but feel as if they are just phoning it in like most supporting-acts in rom-coms do. Topher Grace is still trying to make us forget about Eric Forman and it’s still not working; Katherine Heigl is still trying to make us forget that she bitched-out Judd Apatow (aka, her best role EVER), and once again, it’s still not working; Amanda Seyfried has barely any scenes to herself, but when she does, it’s just blank the whole time; and Ben Barnes is charming and does what he can with that Spanish-tongue of his, but still can’t over-come the fact that he’s just there, stuck in the middle of all of this havoc. Poor guy. Get a new manager.

The only peeps in this cast who really seem ready to play are Robin Williams and Susan Sarandon. Williams seems like he’s having fun playing the same role he basically played in that god-awful movie where he played a priest where two younglings were getting married. Not going to call it by it’s name, and just leave it at that. Susan Sarandon is probably the best out of the bunch because of the way she plays her character, and the way they make her character. Since Bebe, the character she plays, swung-around with De Niro when he was still married to Keaton, you would think that she’d be perceived as a bottomless whore that can’t get a man her own, so she goes for one that’s already got dibs called on. You would think, but the movie actually makes a smart-decision in not taking that low road and giving her more to be sympathetic about and show us why she isn’t such a bad lady. In ways, she was even a better mommy than Keaton’s character was. But that’s bad because the Catholic Church thinks divorce is evil and breaths fire and brimstone. Okay, I’m done attacking anything right now. Let’s just get this thing over with.

Consensus: For anybody who wants to get away from their porno-infested computer screens for an hour or two, The Big Wedding may be the right fit for them, but for the other people that are married, in a relationship, or just don’t really care to waste their time in general; then it won’t fit. At all.