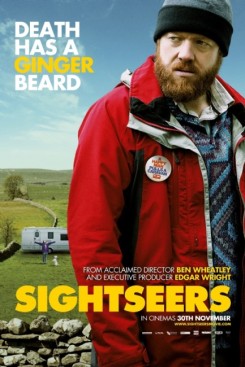 Sort of like if Mickey and Mallory went on a road-trip. Well, a different one anyway.

Two lovebirds, Chris and Tina (Steve Oram and Alicia Lowe), decide that it’s time to get away for a little and have some fun. Chris then plans out this whole trip for the two to take, hopefully have fun on, and explore the country-side. Oh, and they might also do some killing as well. Just in case the moment ever arises.

Director Ben Wheatley is starting to become a voice to be heard in the world of movies. Kill List was a shock of a movie that never ceased it’s turning wheels, and still has me wondering about it, even until this very same day. It’s just that type of movie that messes with your mind, long after you’ve seen it, which is why you should definitely go out, find it, and watch it if you haven’t done so already. That said, this movie had a lot of promise by the way this is Wheatley’s second film and shows that the guy loves blending human-relationships, comedy, and horror, altogether in one, neat package. But what you may not notice until checking out the credits, this isn’t written by Wheatley and is instead done by it’s two leading stars. First mistake right there.

Even though Wheatley took some risky and strange steps with Kill List, you still have to give the guy credit for at least going down the roads that he did, and not making any apologies for it. It was always interesting to see where he could go next with his story, and what genre he was going to mess around with when he felt like it. This movie just felt like the same genre, the same joke, the same happenings, the whole way through. There’s nothing really crazy going on here other than the fact that these two lovers are out on their own, little trip of sight-seeing and killing random people. Funny for maybe the first or second time, but after that: it becomes a bore.

However, Oram and Lowe don’t really seem to get the nods right off the bat. They decide to keep on hammering and hammering away with the same joke that these two, ordinary people would actually spend a whole trip going from place-to-place, killing people whenever they saw fit. It gets old, real quick, and feels like the movie is at a lost for ideas. If anything, the movie did make me laugh with it’s monstrous uses of irony, and finding new and original ways to use it here and there, but even that got to be repetitive as well. Nothing new seems to happen, other than what person they are going to kill next and even then you can pin-point how, who, what, where, and when.

Not good for any movie, let alone one of the horror/black comedy-genre.

Honestly, I wish I could go on and on about this movie and say how obvious it got to a certain-point where I just wanted somebody to slap me with a fish and get it over with already, but I’m sort of at a lost for words. Wheatley still shows his love and compassion for making things terribly-uneasy with the audience, whether it’s watching a person be killed, or the thought of someone being killed. But then that idea starts to get skewered as you begin to see these characters taking out all of their rage and frustration out on people who seem to sort of deserve it. Not saying any person deserves to die for saying or doing something that may not be the nicest-gesture in the whole, entire world, but if Wheatley really wanted to ruffle some feathers, he would have gone for the jugular and given us victims that were the least-bit sympathetic. Everybody here just seem like mean people that had it coming to them some time soon. Not my thoughts. Apparently it’s the movies. Just by the looks of it.

Then, of course, there’s the two leading-peoples themselves: Steve Oram and Alicia Lowe. Since this is THEIR script, aka, their bread and butter, it only feels right that they make it work to the best of each of their abilities, which it does. Oram is funny as Chris, the sort of dude that seems all cool, calm, and relatively-charming on the outside, but very deep, dark, and sinister on the in. The dude never seems like a bad-enough guy to really go full-throttle with all of these murderous-acts of violence, but at least he has fun with it. Low also has fun with her role as Tina, for the sole-sake that she’s just a nut, and is marveling it. She gets to do some pretty strange-o stuff, and pulls it off well, even when it seems like this girl is too nutty to be taken seriously. But then again, you never know what is real, and what isn’t real with this movie. Wheatley leaves it all up to the viewer and I appreciated that aspect, just not the whole film.

Together, Oram and Lowe are good as it seems as if they’ve been best-buddies/eff-buddies for a long time now, as the chemistry between them is natural. They’re weird, odd, and very scary in the ways that they could do anything they wanted, whenever they wanted, but I wanted more from these characters. For the most part, I never felt like I knew any of them, other than the fact that they just liked to act weird and kill people. That was basically it. It never seems like the movie itself was ever keen on taking them seriously enough, to ever give them any real personalities, with real feelings, real emotions, and real ideas in their heads. I know killing people is a real idea, but I didn’t feel like I was watching real people, thinking about a real idea. They seemed more like they were destined for the big-screen. No surprise that that’s exactly where they ended-up.

Consensus: Wheatley still shows his attention to detail, but working on a script that wasn’t made by him, makes Sightseers feel like a bit of a disappointment considering it’s the same, old joke; again and again with new spins on it every once and awhile, but not enough to fully have me in a daze of fun and disbelief.