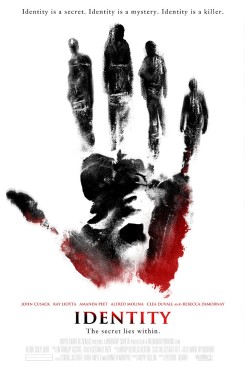 It all started on a very-rainy night with a woman getting run over by a limo-driver (John Cusack). After this, the man tries to save her life by bringing her to a motel in the middle of the desert, owned by an odd man named Larry (John Hawkes). There’s no such luck, until a cop (Ray Liotta) with a prisoner in his custody (Jake Busey), comes on by. There might be hope, but there somehow isn’t, considering the more and more people that show up, the more deaths there are. But here’s the kicker: nobody has a single-clue exactly as to who’s killing all of these people in the shadows. It could be anybody. Hell, it could even be YOU, the viewer!! AHHH!!

This movie is such an obvious rip-off of an Hitchcock movie, it’s not even funny. Everything from the strange-o characters, to the tense setting, to the mystery, and hell, even to the actual motel itself. It looks exactly like the one that Norman Bates rented out for anybody that strolled-along, almost to the point of where the actual sign itself continues to flicker on-and-off to portray just how shady the area actually is. Yes, it can get pretty obvious where the creators took their inspiration from, but the distractions go away once the story starts, and ultimately: where the fun really begins.

Going into this movie, thinking that you have a hot-head for detail and knowing what’s good when it comes to any movie, may just have take your high-hat off for this one because it’s a total puzzle in every stretch of the imagination. Every time a new character is brought to our attention, more of a mystery is presented to us, and just when we think we know exactly what this story is all about, where it’s going, and who’s going to end up being the slasher behind the closed-doors; the movie still toys with us and gives us something new to think about. There were countless times in this movie where even I thought I had it all figured-out, but somehow I was stooped, once again.

Movies like this where you can’t trust anyone, not even the director himself (in this case, James Mangold), always are a treat for me to watch because it’s very rare where I actually get to check out a movie that makes me second-guess myself, almost every step of the way. No matter what I thought was right, I was usually wrong. Even by the end once all of the pieces seemed to start to come together, once more, I was slapped in the face with a disapproving look. Not to say it was an insult or anything, but it was more of a slap to wake up, and look at the finer-details in order to see if I could really get on with this movie, and what it was trying to pull.

But most movies like this, with all of the twists and such, remind me of a young-at-heart relationship between two people. At first, all is good. You see where things could go, you get happy, and you start to appreciate everything that you have in front of you, even if you may be stepping-out of your comfort-zone a bit. Actually, maybe even a bit too much for yourself. However, suddenly things go awry and you realize that maybe not everything was as perfect as you once thought it was, and now it’s time for a slight-change. Or maybe, just maybe, it’s time to over-do everything, show the other person how much you care, and rather than gaining their love and support back, you gain other thoughts and feelings that you didn’t quite want in the first place. You know, the baddie one.

That’s how this movie felt to me. Once everything got ready and going, I was happy and ambitious. I expected the movie to keep me puzzled, glued-in to what was going on, and shock me, every time that it felt like it wanted to. However, things got a little crazy at a certain point that I eventually started to realize that maybe this movie was turning it’s wheels a bit too much. Don’t get me wrong, I appreciated the movie for being fun, clever, and original in it’s own type of way, but after awhile, it only went on for so long and so far, that is, until I started to question whether or not this movie even believed in the twists it was throwing at the wall and seeing what stuck, and what sort of just surely, but slowly continued to slide-down the wall.

Then, on the other side of the stadium, I am a bit torn with this movie because I enjoyed myself, had fun, and continued to second-guess myself, even when I was sure that I was correct in my pretentious, critical-ways (hey, it comes with the job). So therefore, I guess it’s all just a judge of character. Whether or not you are able to take the numerous twists the movie begins to launch into the story, is all up to you. For yours truly, some of it worked and seemed smart, whereas some of it didn’t quite work so well and actually seemed goofy. Oh well, that’s just me. Make up your own minds, kids!

But no matter what crazy shit a movie tries to pull, you at least have to give it credit for getting a cast such as this assembled, and allow them to do whatever it is that they can do to make a movie as goofy as this work. Nobody is really playing very far and away from what we’ve seen them do before, but at least they own it and are game for this type of material. At least. John Cusack is good as the ring-leader of the group, who knows exactly what to do, when to do it, and how to pull it all off so no more people get killed. You see that he has a past where the guy used to be a cop, but suffered a problem that left him emotionally-strained and messed-up in the head, therefore, he left his duty. But that doesn’t mean he’s a bad guy, right? Keep on guessing.

Ray Liotta plays, as you could expect, a cop that has a huge chip on his shoulder with a dangerous criminal in his custody, and a bit of anger-issue. However, as obvious and conventional as this may sound (even for a character played by Liotta), Liotta makes him work because you constantly believe that there is more to this dude than he lets in, even if the character himself doesn’t seem to admit it. Liotta is always good at playing these types of roles, even if it sort of has become a trademark of his by now. That’s fine, though, because the guy seems like he would do the right thing if he had to, but does that mean he’s really a good guy? Keep on guessing.

The only one here who really seems to have a clear-enough conscience not be considered a prime-suspect in all of the killings, is a whore with a heart of gold played by Amanda Peet. I usually love Peet in everything she does, but she seemed a bit annoying here. It wasn’t Peet herself, as much as it was more of her character for having that loud, obnoxious Southern-accent that continued to ring in my ears, even when she wasn’t yelling at somebody for looking at her hot body. Yeah, blame us for this, Amanda!

But they aren’t the only ones in this movie, they’re just the main stars that may (or may not) attract the audience to the wider-show. There’s plenty more where that came from, and they are all great. Clea Duvall plays a young, just-recently married gal that’s having problems with her d-bag hubby; John C. McGinley’s character’s wife is the one who gets hit in the first place and is good at being awkward and twitchy, without reminding me of the legend of all this; John Hawkes is a fun-fit as the type of dude you’d expect to own a motel out in the middle of nowhere (meaning he’s a bit of a creep-o); and lastly, the lovely and equally-as-creepy Rebecca De Mornay is here as an aging, but still very uptight actress that believes she deserves more than she’s given. Art imitating life? Just maybe.

Consensus: Most of what Identity has to offer and whether or not you’ll be able to go along for the ride, is all up to you, the viewer. Twists and turns will occur, and it all depends on whether or not you are game for them. Me, I was quite game, but I will admit that there is some goofiness underneath the blankets of a story that seemed drench in mystery.