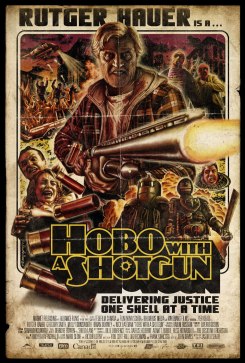 Next time, make sure you spare some change.

Believe it or not, the flick is actually about a homeless man (Rutger Hauer) who hops aboard a train into a city that was once called “Hope City”, but has suddenly turned into a place that they have been now calling, “Scum City”. And scummy, is exactly what it is. People are killing one another, public terror seems to be an on-going feeling throughout the community, and it is all ran by a powerful kingpin named Drake (Brian Downey). The hobo finds himself thrown into all of this madness and violence and decided that he’s had about enough, especially once he’s set his sights on a single-barrel shotgun in a pawn store during a hold-up once all of this vigilante killing begins.

Much to my surprise, after thinking that this flick was non-other than a shitty-attempt at trying to be like the sloppy, “grindhouse” movies that Robert Rodriguez and Quentin Tarantino strive so hard to go for every now and then, I actually found out that the director of this flick, Jacob Eisener, won a contest where his trailer would be attached to Grindhouse back in ’07. I’m assuming that the buzz for it was positive because here we had it, almost 4 years later and instead of being a less-than two-minute trailer, we had a movie that was less than a-half-an-hour. Like the movie it was attached to; a neat idea, just bad execution.

And when I say the word “bad”, I don’t mean it in the way that it’s actually going for, I mean in a way that the movie can’t really be enjoyed all that much because it seems to try so damn hard. Listen, I get it: the movie obviously wants to pay homage to those old-school, shit-fests of the 60’s, 70’s, and 80’s by being deliberately bad and cheap-looking, but all of the time and effort into making that happen, can only go so far. Eventually, it just seems like that’s all Eisener has going for himself and the movie he’s directing. The dude definitely has a vision that’s as grimy and raunchy as they come, but just topping all of that off with random spurs of violence, rape, gore, and mass-killings, only makes it seem like a waste of a smart sense of style.

That’s where the real shame in this movie actually comes; from the fact that Eisener seems like an inspired-choice for this type of movie, but just can’t get it fully together. The look of the movie is odd, but in a good way. Certain colors are distorted to give you the grainy feel of those oldies, but also to place you in a world that’s almost too barbaric to be considered reality. It’s as if once the hobo got on that train and got off of it, he landed in a world inside of his own head where violence, havoc, panic, and crime occurred almost every wee-bit second of the day. It’s a pretty strange atmosphere that Eisener sets up, as well as one that works in a freaky type of way; it just can’t sustain a whole movie, no matter how short or tepid it may be.

Once the killings do occur and blood and gore spills everywhere, the film has some fun with itself and allowed me to join in on it as well. There’s nothing like watching an old man, with a shotgun, going around and killing people that seem to deserve it the most. Films like Super and Kick-Ass, that are somewhat similar to this, are perfect examples of a movie that has it’s fair-share of gory, unabashed violence, but isn’t afraid to go one step further and talk about what it is that it’s portraying on-screen, and why, in a way, it’s the wrong thing to be watching. For some viewers, they may seem arrogant, but for me, it’s a smart move on the parts of the writers, a smart move that the writers nor Eisener seemed to even bother with here. And honestly, not every movie that has blood-soaked moments of pure, vigilante violence needs to do itself justice and have a point, but the way it was portrayed here, in a negative light, it almost felt like we were going to get that one key moment where we finally got a chance to hear and see “what the story was really all about”, but nope, it never happened.

Instead, Eisener and his gang seem more involved and inspired with giving us bits and pieces of violence that literally have us feeling as if we just got hit with the red paint, almost as much as the actors/actresses in the actual movie. Maybe fun for a Saturday night-viewing with a bunch of your drunken-pals, but for somebody who was just lounging out on the couch on a Monday afternoon, it does seem like a bit of a disappointment.

But somehow, someway, that’s where Rutger Hauer came in and saved the day with his oddly-subtle performance as the Hobo. Hauer isn’t doing anything ground-breaking or original with his role that we haven’t seen done before, especially by him, but at least he gives us more than what it seems like the script is asking for. That scene in the hospital where’s talking to all of the newborns is surprisingly compelling, even as missed-place it may be, being in a movie about a hobo who runs around, wielding a shotgun in hand and killing people. Actually, that’s pretty much all of Hauer’s performance, as it feels like he’s doing a lot better than the script needs for him to do, but being the pro that he is, he knows what’s up and gives it his all. Besides, when’s the last time you saw a flick titled “Starring Rutger Hauer”? Exactly.

And then of course, everybody else in this flick is completely bonkers; aka, exactly what the script is calling on them to do, which means they are neither good nor bad, just here. Brian Downey is crazy as Drake, the head honcho who runs the town and knows what goes into it and comes out of it; the latter of which is mostly made through his disposal. He’s having the most fun out of everybody, as well as Gregory Smith and Nick Bateman, who both play his sons that want to be just like him and commit just as much violence and crime as he does, except they do it to show who’s the better of the two. By the end of the day, nobody is really better than the other, although I was happy to see that Allen from Small Soldiers had a career that didn’t consist of talking to action figures that sounded like Richard Nixon. Poor guy. His career went all downhill after the Gorgonites left.

Consensus: Though it delivers on most of the insanely cheesy, B-movie gore, thrills, chills and splatter-moments that it promised right from the first trailer, Hobo With a Shotgun gets old after a long while and it’s all because the movie seems like a carbon-copy of what Rodriguez and Tarantino have been doing for years, but have pulled off more effortlessly.