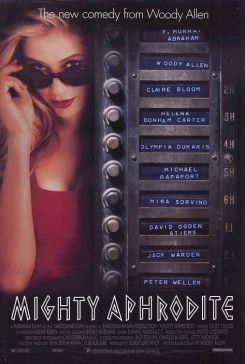 I never pay prostitutes to have brains. Just enough low self-esteem that they’d consider to be with me.

Lenny (Woody Allen) and Amanda (Helena Bonham Carter) are in love and want to start a family. However, Lenny’s not quite ready for that yet so they decide to adopt a child named Max. A couple of years go by, Lenny is feeling neglected from Amanda, but is always there for Max and surprised by how smart and knowing he is. That intrigues Lenny so much that he starts to begin a search, behind Amanda’s back, for Max’s birth-mother and finds out that she’s a porn star/prostitute named Linda Ash (Mira Sorvino). Lenny is obviously shocked by this result but he doesn’t let it get to him, and tries to change her so that she can meet-up to his vision and leave the life that she’s been living, despite it being the only way she can manage a steady-income. While Lenny is off being a counselor of sorts, Amanda’s off on her own having her own sort of affairs, main which being one with her art-gallery owner (Peter Weller).

An “okay” Woody Allen movie, is better than no Woody Allen movie. That’s all there is to say about the man, especially since he churns out a movie every year, gets an even-more stacked-cast than before, and continues to find more and more interesting ideas for his stories, and how to tell them. They don’t always work, but it’s always nice to see the guy back on the big-screen, no matter how regular or average the film he’s working with may be. Although some may definitely disagree with me on this: Yes, Mighty Aphrodite is average and regular.

As usual, what I always like about Woody’s flicks is that the guy has a keen sense of humor, no matter how dark or grim the subject-matter may be. Which is weird considering how the movie starts off light and straight-forward with him and his girl adopting a kid. It feels like a film that’s a bit too innocent and sweet, especially coming from the finger-prints of Woody Allen himself. Thankfully, once the movie goes about 20 minutes into itself, we are then introduced to a whole other story-line that makes the film any bit of being memorable. Ladies and gentleman, I present to you: Ms. Mira Sorvino herself as the screechy-voiced prostitute herself, Linda Ash.

See, I can’t go on and on any further without mentioning her right off the bat because she makes this movie. Sure, Woody’s good, his writing is inspired, and everybody else in the cast has their bright and shiny moments, but it’s this woman who takes this movie, brings it up by the grips of her hands, and never lets go of it, even when she isn’t on-screen. Her presence is always felt in this movie, and that’s a good thing because she keeps it hilarious and fun, while also giving it it’s right amount of heart and sympathy as well. Of course this is Mira’s best performance, not only because she won the Oscar for this, but because she hasn’t really done much after this. And hell, even the stuff that she did do with her career, was nowhere near as challenging or as exciting as this role.

She’s given the hard task of taking a character that would be easily considered “annoying” and “bothersome” by about the first 10 seconds of screen-time that we spend with her fine-ass, but surprisingly, the girl keeps her rompy, to where it’s almost like a whole person herself. Easily, without a doubt, she could have been played-up for just a bunch of laughs as if she was more of a caricature that we usually see in these types of flicks that concern a low-bit, NYC hooker, but the combination of Woody’s sharp-writing and Sorvino’s general likability, is what keeps this character more than just a cliché. She actually has a heart and soul that you feel for, not because she’s way too in over-her-head with certain things, but because she actually does plan on being a person that makes a difference in someone’s life, even if it does concern still hooking around and whatnot. Sorvino’s so good here, in fact, that knowing that she hasn’t really done much with her career ever since, makes it all the more better because it’s the snap-shot of brilliance that comes every once and awhile.

Did that hype the performance up enough for ya?

As I said though, saying that she’s the best part of this movie isn’t too discredit any other aspect of this movie that makes it work. It’s a joint-effort and more than likely, the flick works. Woody’s always been, and probably forever will be, a welcome-presence of the big screen, even if it is a bit odd to see a 60-year-old man, adopt and raise a child as if it was the most casual act of kindness on the entire face of the planet. Others are good too, especially the highly-underrated Michael Rapaport, who plays a boxer at a gym that Lenny cons into going out on a date with Linda and has the under-lining, good-boy sweetness to him that allows you to get past the fact that he’s a total idiot. Then again though, she is too and watching them together is probably the high-lights of the movie. In fact, those scenes are so good, as sparse as they may be, I probably wouldn’t have minded seeing one whole flick just surrounding them and their blossoming relationship. Now that would be a Woody Allen flick I’d be very excited to see, but probably may never, ever get.

The ones in this cast who I don’t think worked were very small problems here and there. I like F. Murray Abraham in just about everything he does, and is even good here, but the whole act that his legion of cult-singers narrate the story and tell us what’s lingering at the end of it, as if it were a Greek, modern-tragedy, got old and only took steam out of the flick. Also, it served as a pitch perfect example of what it’s like when Woody can get a little too up his own ass and seem a bit pretentious. And before I go and forget to mention it, Peter Weller, as snarling and oozy as he may be, feels like he’s here more than nothing else to be a dick, and nothing but. Come on, Woody! You can do better than that!

Consensus: Whenever Mira Sorvino isn’t on the screen at all, Mighty Aphrodite isn’t as sharp or as entertaining, but when she is around, for us to set our eyes on, she’s fun, exciting, hilarious, and heartfelt, in only the type of way an Oscar-winning performance could be.