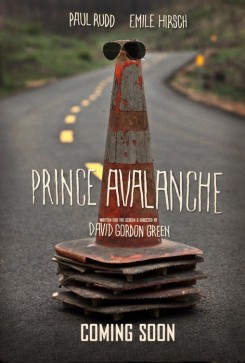 The wilderness will break any man. Even the funny ones.

During the cooled-down, relaxing summer of 1988, two dudes named Lance (Emile Hirsch) and Alvin (Paul Rudd) spend their nights and days as highway road workers, in a isolated small-town of Texas after a huge forest fire wiped almost everything out. Though Lance hates the woods and wants nothing more than to get out, go to the city, and pick up whatever babes that he can, Alvin is very different. He loves the out-doors and basically considers it his home away from home, however, he also runs into a bit of a dilemma with that as he’s dating Lance’s sister, who also happens to be miles and miles away. Lance and Alvin are obviously very, very different from the first out-look, but once they begin to get talking, feel more emotions, and realize certain traits about the other person, they come to terms and notice how alike they truly are, in some very odd ways.

After wasting his life away with rather dull, not-so-subtle studio comedies like The Sitter, Your Highness, and the best of them all, Pineapple Express, I’m happy to announce the return of David Gordon Green to the world of effective, small indies that breath new life into a story that has been told many, many times before. It’s been awhile since we’ve seen this guy go back to his roots and really get in touch with his characters, their feelings, their emotions, and who they truly are, and thankfully, no rust shows. Instead, we see a director who has practically learned all that he needed to know with a film-career such as his, but has also found a way to combine them all together in one, joyous film.

What I mean by that is that all of the Terence Malick-y touches that he had on his earlier flicks, are still evidently clear to see here, but with a bit more of that fun, comedic-punch that he had in his later, weaker flicks. Still, the combo of funny, sad, and beautiful all come together perfectly and feel like a fully-realized idea from Green, rather than a sad-sack attempt of trying to relive those glory days he once had. Sort of like the high-school jock who returns to the 10-year reunion, still sporting the jacket, the tats, and the womanizing-skills he once had, yet, falls flat on his face because he has done nothing with his earlier-success and become something of a failure of sorts and lost his touch. This movie could have easily been the same type of example of Green and this movie here, but the man shows that he continues to grow more and more as a film-maker, and is able to soak it all in.

Let’s hope this idea continues on into whatever he oh so decides to choose next. Because as for right now, the guy’s back on the right path to being everybody’s favorite indie-auteur. For now, at least. Once he goes back to smoking weed with Judd Apatow and the rest of the gang, then he’ll probably go back to his crazy land.

Anyway, while this flick definitely reminds us why Green was such a lovely talent that you needed to see, almost less than a year ago, you can still tell that there are itsy, bitsy problems still to be seen. Because he has dipped his pen so much in the comedy ink, a lot of the drama and emotional feeling that this material would have in full-force, is played-out to a lesser effect, mainly because Green seems to be so obvious with his comedy. The comedy is funny, yes, but it also takes away from a couple of key scenes where I could have easily been lying in a pool, filled with my own tears and emotions. Instead, I left feeling slightly touched, but nothing more. That said, I can’t hate on Green too much because he shows us that he’s able to still have “it”, while also being able to grow more as a writer and director. Basically, I’m just glad to see him back. That’s all.

Where the real strength and power of this movie comes from is the casting of both Emile Hirsch and Paul Rudd in these roles: Lance and Alvin. I’ve always stuck up for Hirsch in almost all that he’s done ever since he first broke-out in The Girl Next Door. Nowadays, that seems to get me more crap than actual praise, but little performances like these, in a movie such as this, remind me why I go to bat for the guy so many times. It’s obvious that Green is playing around with his comedic-writing with this character of Lance, who is practically just the idiot of the two, but still gives him enough heart and humanity to where we see him as a guy who’s definitely shallow in the way he acts and thinks, even though his heart is in the right place. Hirsch is great at making us laugh at this character, while also still having us realize that he’s like you or I, just really, really horny.

The scene where Hirsch talks about his weekend, with all of it’s ups and downs, is probably the best example of his acting, as well as the flick itself, because it makes us laugh by how dumb some of the stuff he says really is, but also has us sympathize with him because the idea of being with a chick and banging her; is that all that he’s got to live for. You take that away, he’s not a person anymore. Sad, but I see it with many of the d-bags around me, so I obviously connected to that one the most.

On the opposite end is Paul Rudd, still being goofy and charming as Alvin, while also showing us something deeper and more human to this guy. Alvin does seem a bit like a tight-assed nerd who never really got to live it up in his youth and have fun, so is now taking it out on the one who person who actually is, but Rudd’s general-likability is able to allow us to get by that fact. You know that he’s a good guy, cares for the people around him, and wants nothing more than to just be happy, but you can also see him struggling with the idea of getting by in a world that seems like it’s speeding-up a little too quickly for him. There’s plenty of scenes where Rudd is goofy and “himself”, but there’s also plenty others where he lets loose on the drama and really gets to the bottom of who this person is and why. We’re supposed to not initially like him or sympathize with him when something bad happens to him, but we just do. Why? Because it’s Paul Rudd and everybody loves the guy! The chemistry these two have is what carries the flick and even though they do get a bit weird sometimes with their conversations, it all feels real, natural, and subtle; aka, just the way we like it with our David Gordon Green movies.

Consensus: While it may not affect as many people as his earlier movies, David Gordon Green’s Prince Avalanche is still a beautiful, hilarious, amusing, and compelling movie that shows him back in his original-form, with more kinks added to make it more suitable for anybody to watch and enjoy.