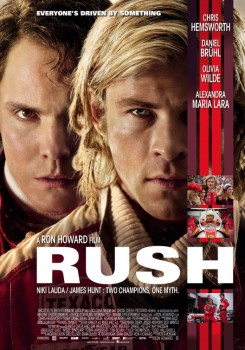 What the Speed Racer movie should have been. Thor included.

If you don’t know the story, well, then now you will. 1970 Formula One champions James Hunt (Chris Hemsworth) and Niki Lauda (Daniel Brühl) had a rivalry that lasted for quite some time, both on and off the racetrack. Many of the reasons why is mostly because if they were both two different people. Hunt was more of a fun-loving, party-boy that loved shagging whomever he can find, while also sipping a nice little drink afterwards; whereas Lauda was all about being serious, not getting caught up in the “celebrity life”, and keeping his mind on the prize: Being the best racer in the world. There’s plenty more differences between these two that continue to evolve as they get older and the competition between the two begins to heat up, but once a deadly accident threatens the life of one, the other suddenly finds themselves stuck in a rut. Should they, or should they not continue on with this rivalry, just give up, and let bygones be bygones, or, should they man-up, take advantage, and continue on the countless battles and races? Decisions, decisions, but on the racetrack, you don’t have much time for thought because one second of distraction, could very well be your last.

In case you haven’t been able to see for these last couple of days, Ron Howard’s never been the type of director to really sweep me off of my feet. Sure, he makes for one great narrator and has definitely had his fair share of good movies, but he always seems to play it safe, never opting-out to maybe shake a few things up, meaning his career being one of them. However, making a Formula One driving movie, starring two names that aren’t really box-office draws (yet), and releasing it at the end of September, seems like the only way he can shake things up. It’s also a way that works.

Though I would never, ever, not in a million years consider myself a racing fan, let alone, a racing movie fan, I still have to say that I can enjoy myself when they’re done right. This being one of those instances, Howard’s mainly to be credited for that because he gets us right into the mind-set of these characters of what it’s like to be apart of these races. The revved-up engines; the smoldering steam coming from them; and the death-defying thought that any moment, you could crash, burn, and become nothing more than just some skin, and all bones. Those ideas are thrown in by Howard’s direction which not only keeps up the adrenaline and pace for these races, but the story as well, and are probably even more deadly to watch, especially if you don’t know the history behind this real-life feud.

For me, I had no idea who the hell came out of this battle on-top or at the bottom, and for what reasons, and I think that’s what really allowed me to enjoy myself with this flick. Though it didn’t seem like the type of flick that would start off with this rivalry, and then, all of a sudden end 30 minutes in because one member of the feud died (this is a Ron Howard flick after), it still did feel like the type of sports movie where, even if you know the story going into it, you are still on-edge, wondering what’s going to happen, and to whom. That’s what kept this movie going and further and further away from other sports movies that tend to lean more towards clichés, even if the material can’t help but fall for those pitfalls either.

Still, there’s something to be said about a good sports movie done right, without pulling any contrived punches. Especially the racing movies.

But I think what separates this sports movie among the rest of the sometimes conventional pack, is that at the heart of this story is real humans capable of having feelings, emotions, and dreams of being the best in whatever skill-set they have. Since the feud between Lauda and Hunt is in fact real, with some alterations probably taken for the movie’s purpose, you always get a feel for who these guys really are, how they feel at any given moment, and why they deserve to have a movie about both of them, especially since the movie never takes a stance on who it’s rooting for more. At times, one will seem more like an antagonist than the other; and then, about 30 minutes later, that view-point will totally do the ol’ switcheroo, with the antagonist becoming the protagonist, and vice versa. Just like the movie’s racing scenes, the story itself keeps you on your feet because you never know quite who to root for, and which person should come out on-top at the end of it all, because they both seem worthy, and un-worthy of it at the same time.

Some of that credit is given to Ron Howard for not opting-out to settle for one person being better and more deserving than the other, but most of that credit must go to our two leads: Chris Hemsworth and Daniel Brühl. Hemsworth, in the years since Thor, has been proving himself, time and time again, as the actor who’s more than just a pretty face, and one that has extreme talent that can not only carry a movie, but make a somewhat despicable character, turn into a good guy, without really changing much of his personality to begin with. Hemsworth has the less meatiest role of the two, but the man still shows a love for this character, and all of the energy that he puts into. Hunt was a charming real-life figure that loved to party, loved the ladies, and loved to live every second as if it was his last, and you get that feel from watching Hemsworth every second here. He’s funny, charming, easy-on-the-eyes (coming from a straight-male no less), and definitely seems like he has enough capacity as a human-being to be a respectable, kind-hearted guy when he’s called on to be one. And whole he does have his flaws that shape-up the latter-part of his career, you still know that deep down inside, he’ll do the right thing if he has to.

That said, Niki Lauda is the same way, except totally opposite personality. Brühl hasn’t been seen much of since Inglorious Basterds, and it’s sad because the guy has a real talent that I feel like is going to break-out any second now, and I think his amazing performance as Niki Lauda is the first step in that process (next is The Fifth Estate, but we’ll get to that when that time comes around). While Lauda is definitely the more compassionate and sympathetic of the two, you still see him for all of his flaws and problems, even when it seems like he’s the most deserving of the prize at the end of each and every race he partakes in. He’s determined, smart, and a no-nonsense type of guy that doesn’t always make him the most popular guy at a party, but still keeps him happy with his life, as well as prepared for whatever he has next in his life. However, he’s not a total stiff of a dude that doesn’t know how to have fun or at least be nice to those around him, he just doesn’t have enough time to really flesh any of those aspects of his character out, he’s just too busy trying to find a way to be “The Best Racecar Driver in the World”. Brühl makes us care a lot for Lauda, as well as see him in a light that isn’t just about a perfectionist who needs to get a grip on reality, but more in a light that has him come out as a dude that wants to give his own life some meaning, even if that means having to come face-to-face with challenge on a daily-basis. Brühl’s been getting a lot of rave reviews for his performance in this movie, and I think it may be time to start hearing some “Oscar whispers”? Maybe, just maybe.

Consensus: Most will probably not want to even bother with Rush, simply because it’s a movie about racers doing what they do best, but it’s a lot more than just a bunch of tense and electrifying racing scenes, there’s an actual story behind this; one that’s filled with some emotion and great performance from both Chris Hemsworth and Daniel Brühl.