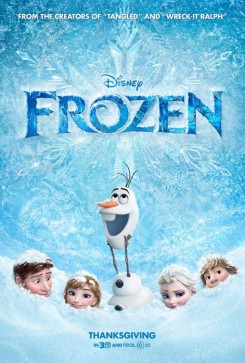 As if any of us needed anymore reminding with how freakin’, deadly cold outside it is! Thanks, Disney!

When they were both wee-little girls, Anna (Kristen Bell) and Elsa (Idina Menzel) suffered tragedy at the hands of the other girl, and scarred them for the rest of their lives. So much so that Anna has never quite been able to forge-back the relationship she used to have with Elsa. Instead, she’s told to keep her distance, make herself pleased in any way she can and just wait until Elsa is finally crowned Queen of Arendelle, and is given the right to be wherever she wants, with whomever she wants. Anna sees this is a way to break out of that big, old and lame castle, and have some fun for a change! However, Elsa’s mysterious powers of unexpectedly being able to turn everything around her into ice sends her away from the rest of the village, while still leaving them in the blistering cold without much heat to keep them alive and well. However, Anna comes to the rescue, and with a lending-hand from handyman Kristoff (Jonathan Groff), she may just be able to save the day, even if she does eventually realize that it’s going to be a harder task when so many people want her and her sissy dead, and the throne all for themselves.

Hate to say it and sound like a cynical ass, but animated movies don’t really do much for me nowadays. Sure, I like them when I do eventually get a chance to see them, but it’s been quite some time since the last time I found myself foaming at the mouth by just the thought of a new animation flick. Some of that blame can be put on for Pixar and the fact that, in the past couple of years, they’ve been dropping the ball more than usual, but most of that other blame can be also put on the fact that I’m getting older, more miserable and without any kids by my side (at least ones that I ACTUALLY father). So therefore, it’s more that I’m just some old, cranky dude that doesn’t like bright and shiny things that make little kids happy; in fact, I frown upon them and scream out “Bah humbug!”

But, like I predicted, what I expected to happen, did in fact happen: The animated movie that I was not looking forward to a single bit, surprisingly, did a lot for me and had me smiling for practically the whole time.

While most of you out there won’t be surprised by me saying this, I sure as hell am because while I do fancy myself actual, good animated flicks, this one did not seem to have the makings of that said animated flick whatsoever. But surprisingly, I found myself smiling more and more as it went along. Though I didn’t initially know it was a sequel, the surprise was well-worth it as each and every song, though not memorable, still had me astounded by how fun, up-beat and impressively-done most of them were. Sure, some of them aren’t going to be known as the “Under the Sea” of this generation’s kiddie-bops, but they still get the job done in being fun, light, quick and straight-to-the-point, in hopes of not drowning out the minds of its target-audience too much.

And in order to know that I was fully and honestly enjoying myself with these songs, I’ll have you know: The feet were tapping, and the fingers were dancing. There! Now you know I had a great time with this movie, but most importantly, these songs!

This movie’s charm isn’t just in the way that it’s songs are buckets of fun however, because believe it or not, despite the story being just another re-working on “The Snow Queen” fairy-tale, there’s actually some subtle, original nuances to be found in the pits of this story that you may not find in other animated flicks of this same nature. For instance, without spoiling too much just in case any die-hard cinephile out there who is still interested in seeing this movie is reading, the movie does, somehow, and in someway, end up coming to the conclusion that a gal doesn’t always need a man in her life to get the job done. The only person she needs to rely on the most is her, her brain and the resources she has around herself. Yeah, I guess those said “resources” could include a member of the male gender, but that’s not the whole point of this movie. The whole point of this movie is that these lady characters eventually come to realize that they can get the job done, or at least, finish their objective by just doing what they think is best for themselves.

Now obviously, there is a love story that needs to be here in order to still spit-out positive messages for the whole crowd, but it’s not done in a hackney-way that feels like it was just thrown in there. Surprisingly, the romance between these two main characters that I refuse to mention, because it may just surprise the heck out of you, feels honest and heartfelt enough to be worthy enough of its own movie. Heck, maybe even its own, live-action rom-com? Highly doubt we’ll get it, but here’s holding out some hope for the future, baby. Here’s hoping!

If anything, too, this movie deserves the ultimate credit in reminding me why Kristen Bell is such a lovable presence to have in a movie, regardless of whatever form it may be in. She can either be showing up for a small cameo, in a lead role, or voicing a character, but whatever it way it may be, she’s still pleasant enough to have around because she is one hell of a charmer. She gives Anna her fun and spirited sense of energy that never leaves this character, especially even when she’s singing her damn heart out. Don’t know if I’m just an imbecile or what have you, but I never knew that K-Bell could actually heckle to skies like she did here, and I have to say, color me surprised and impressed on that one. Girl can belt it out like it’s nobody’s business. That’s for damn sure.

The rest of the voice cast is pretty damn lovely to have around, too, with each and every one throwing their own two cents in their for good fun and measure. Josh Gad steals the show each and every time he shows up as Olaf, giving us the impression that this guy is still so pleased with himself in everything that he does, yet, we still enjoy his presence enough not to care too much; Jonathan Groff is also a nice fit as the hard-working Kristoff, who builds a nice rapport and chemistry with Bell’s Anna, regardless of whether or not they were actually in the studio next to each other, recording and whatnot; and Alan Tudyk proves to the world, once again, that he can do no wrong when it comes to voicing these outrageous characters. The only weak-link in this cast that I can come even close to finding is Idina Menzel, and before you all flame me in the Comments section, it’s not because of her singing (we all know that could NEVER be true)! The only problem with her voice is that when she was talking, and not singing her lungs out, you could tell that she was a lot older in the voice than what the character was actually called onto be. Now personally, I don’t know how old Elsa’s character was meant to be, and it probably didn’t matter, but when you have somebody’s voice as high-pitched and youthfully-sounding as Bell’s, it’s kind of hard not to sound like a older, more tough and rugged gal. May be a weird complaint, but it’s something I realized. However, it didn’t matter to me too much after long, because, well, I mean just listen to this! JUST LISTEN TO IT! BLOODY HELL!!

Consensus: Not the greatest animated flick Disney’s churned out in the past couple years or so, but regardless, Frozen is still a pleasant, joy-filled time at the movies that’s easy on the eyes, ears and mind, as it teaches some worthy life-lessons you don’t often see in current animated flicks that come out every once and awhile.