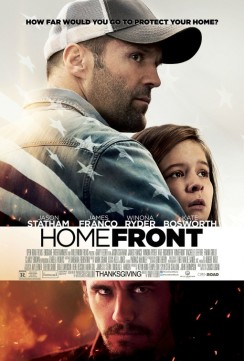 Them Southern belles and boys don’t take too kindly to British lads around their parks.

After a drug-bust goes slightly wrong, DEA Agent Phil Broker (Jason Statham) and his little girl Maddy (Izabela Vidovic) relocate to a small, abandoned Louisiana house where they are practically left alone and allowed to resume their normal, everyday lives as if nothing ever happened. It seems to be going well for awhile too, that is until Maddy violently retaliates to a bully, breaking this kid’s nose and everything. The boy’s mother (Kate Bosworth), despite looking like she’s constantly in need of a meth-fix everytime she shows up, somehow starts up all the right trouble, giving Phil Broker the kind of unwanted reputation that usually drives out new-folk to this small town. It gets so bad, actually, that she even goes so far as to call up her drug-dealing, big bro Gator (James Franco) who knows a thing or two about Phil’s past that puts him and Maddy in some serious danger. Then again though, Phil being played by Jason Statham and all, we know he won’t go down without a fight.

First things first, I think it’s best to tell everybody right off-the-bat that this flick is written by none other than Mr. Sly Stallone himself, which already gives you the idea that not a single ounce of this movie should be taken seriously. Because, in the past couple of years, with the movie’s he’s been participating in, it doesn’t seem like he has, so why the hell should we, you know? Some part of me wishes that this movie took that idea and ran with it, but instead, this is what we’re left with: A big, dumb, brainless action-thriller, somehow disguised as deadly-serious, slow-burner.

And that’s the biggest mistake I think Sly could have ever made with this material.

With a movie this outrageous, it almost feels like you just have to make it something that’s quick, loud and to the point, just so we don’t realize all of the cracks with the important elements that go into making a movie. Elements like say, acting, writing, directing, originality, and so on and so forth. Nope, you can’t find much of that here, and even when you do, it’s not of any great quality to really call home about. Instead, we’re mainly just presented with something that should have been a totally fun, exciting and well-worth it time-burner, but we get something that takes its time a little too much.

Don’t get me wrong though, I’m fine with a movie trying to tell its story, set-up its pace and give us characters to care about, mainly through developing them and showing dimensions, but this isn’t that type of movie. It’s much more of something that should be balls-to-the-walls crazy, over-the-top and nutty, as if we were watching a movie dear ol’ Sly himself would have actually starred in way back when. Heck, I don’t know why he didn’t star in this one as it was! Sure, he’s a bit older now and most of the fighting scenes would have looked hella cheesy and tacked-on with him moving around, but who cares. His type of silliness would have made this movie at least somewhat charming, rather than just emotionless, but sometimes fun.

But you know, I can’t really get on a flick like this, because when it’s having fun, it’s a good time to be around for. The only problem with all of the fine action set-pieces is that once we actually get to the point where one occurs, it takes a long while for us to get to the next one where we have to pay attention to the characters, the directing and the most simplest of them all, the acting. Now, I’m not saying that any of these actors in these roles are per se, bad, it’s just that they don’t necessarily bring anything to the table, nor do they make the material better or worse with their presences being felt. They’re just there to act like window-dressing for a whole bunch of explosions, guns, bullets, drugs, sex and violence. A whole lotta violence too, may I add.

Jason Statham, whether you love him, or you definitely hate him, there’s a certain charm about him in these movies that somehow works, if only just for his character. He doesn’t really try to dig any deeper with this wholesome daddy, yet, savage beast known as Phil Broker, but he gets the job done more than he doesn’t. Especially when he’s just kicking ass, taking names and saying some sort of cocky one-liner that’s only funny to the people closest to the speakers who can actually decipher what the hell he’s saying underneath that freakin’ accent. Seriously, I get that the guy is born and bred from England, but he needs to help us out a bit with that “talk” of his. I mean, seriously. It’s literally been eight or so years since the last time he was in a Guy Ritchie movie. Help us out, pal!

However, the strangest thing behind this whole movie is that this is being advertised as yet another, big, dumb, stupid, action-vehicle starring Jason Statham, and somehow, these really well-known, very talented stars got involved with the supporting cast, making you wonder why they even signed up to do this in the first place. But after awhile, it becomes clear: They just want to stretch their wings out a bit. That’s not a bad thing neither, considering some of these names in here do desperately need to show us that they still got the goods to sell us on anything it is that they do, but there’s nothing at all for them to do.

The most prime example of this fact would be James Franco’s Gator. We all know that James Franco loves to switch things up with his career, whether he’d be playing a wanna-be-gangsta, Allen Ginsberg, or even himself, it doesn’t matter because Franco’s one of the brightest and bestest talents right now that loves doing cool things with his career, and seems to always succeed at pulling them off, no matter how random or obscure those decisions of his may be. This is where I think he goes a bit too far with those odd choices, but it’s less of his fault, and more of the script, although he’s definitely partially to be blamed, too. The problem with Gator isn’t that he’s a bad dude, it’s just that he isn’t very interesting or even worth even being scared by. You sort of always know that Statham’s going to kick this guy’s ass no matter what, and most likely go home with a win at the end of the day. Franco definitely could have made this character interesting, compelling or even fun to watch, but oddly enough, Franco kind of straight-faces his performance the whole time, despite this guy being a backwater meth-dealer, which is already plenty enough substance to make a person want to go crazy with a performance. So basically, if you put these two problems together, you just get a lame character, with a very strange and dull performance from Franco.

Something I never thought was possible, but hey, I guess anything truly is possible in a Jason Statham, action-vehicle.

The rest of the cast fair-off a bit better than Franco, however, it’s obvious that they definitely try all that they can do to make this work as well. Sometimes, painfully so. Winona Ryder does what Franco should have done, and gives her biker-trash girlfriend enough craziness to actually make us want to feel like we want to watch her, however, it’s pretty hard to watch when all you know that she’s doing is just acting all crazy, just to act crazy and try to steer our minds away from the bad script; Frank Grillo plays, YET AGAIN, another villain but he handles it fine and shows that he can still steal the show, even if he does show up with only about ten minutes left in the movie; and Kate Bosworth, despite never impressing me before in her long-storied career, somehow becomes the most believable and most interesting character out of the whole bunch, despite her practically yelling, hootin’, hollerin’ and looking like she’s in desperate need of a shower, everytime it is that we see her. Never been too big of a fan of hers, but I’m always ready to be impressed and surprised. And hey, it’s like what I said before: Anything truly is possible in a Jason Statham, action-vehicle.

Consensus: While there are spouts of action, fun and tension to be found in Homefront, they still don’t add to much of a movie that’s worth investing time in, or even really caring for. You just want to see the explosions, the violence and the asses being kicked, so you can be on your merry way. Is that too much to ask?