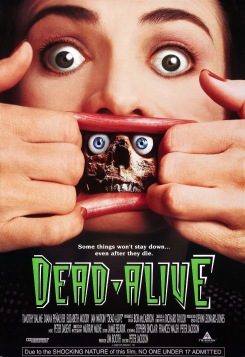 Or Braindead. Whatever you want to call it, there’s still plenty of blood-flavored corn syrup to be found.

In 1950’s New Zealand, village nerd Lionel (Timothy Balme) tries to keep his romance with local bag-lady at the supermarket, Paquita (Diana Penalver), up and running. However, the only real factor getting in the way of that all is his constantly nagging mother (Elizabeth Moody), who never seems to want him to leave her alone, or stray away from her and fall in love with somebody else. It would be sort of sad and sweet in a way, but she’s such a beotch that Lionel can’t help but wish she was dead. Well, eventually, good ol’ Lionel gets his wish to come true when all of a sudden, his mum is bitten by a virus-infected Sumatran Rat Monkey. Slowly but surely, before Lionel knows it, his mom has dies but is still alive in the way that she’s a zombie, running around, biting, feeding off of and infecting others as she goes on her merry way. Eventually, she starts to infect too many people to where Lionel has to keep them all locked up in his basement so that the infection won’t spread and kill almost every person in town. But one night, against Lionel’s wishes, a party is thrown at his huge pad which leaves the basement unattended to at times, therefore, also leaving there plenty of time and space for these infested-zombies to start having themselves a little feeding time!

While it has been said many times before that Peter Jackson is definitely the only type of person that can direct the Lord of the Rings/Hobbit movies the way they need to be directed, I still wonder how that decision or that idea even, all came about in the first place. Most of the movies he made before the Tolkien adaptation, were just strange, slightly off-kilter horror movies (with the exception being Heavenly Creatures, which was somewhere in the middle) that didn’t tackle big spectacles of sword, sorcery and wizards. They were just odd movies, made from a pretty odd nerd who seemed to have a talent for making really crazy, but really fun horror movies, with this being the clear example of that statement.

Over the years, I’ve heard many people go on and on about this movie and I never gave it a shot because horror movies really aren’t my thing, nor is gore, which I heard this movie had a load of. But, much to my surprise, the movie still kicked my rear-end into high-gear because while it sure as hell was a horror flick, it wasn’t a very scary one, nor did it ever take itself too seriously. It’s a B-movie in every sense of the word and never stops being campy, over-the-top or just absolutely wacko with whatever it’s doing, and never for once settling for less. You rarely ever get that with B-movies nowadays to where you could get a movie that doesn’t take itself too seriously, yet doesn’t go to the full-max of its insane potential; but Jackson did not disappoint me here one bit. I mean lord, there’s even a scene where a dude beats the hell out of this zombie baby in a public park! If that doesn’t give you the idea of what to expect from this flick, then I have no clue what will! Anyway, I have to give Jackson loads of credit here because he kept everything quick, hilarious, crazy, unpredictable and best of all, campy, but done so in the right way.

Thanks, Pete. You da man!

And now, the gore. Yes, yes, yes. In case you haven’t been able to tell by now, or haven’t heard about this movie before, there is plenty of blood, gore and dismembered limbs to be found here and if that is not your thing, then get the ‘eff up out of here and go rent Steel Magnolias or something. But if those three elements all sound like a juicy good time to you, then you, my friend, should definitely get the hell out there, find your wallet, do whatever you have to do, and see this movie right away. Why? Because the insane amount of gore will utterly leave you flabbergasted, but don’t be alarmed, because it’s done in a sense that goes hand-in-hand with the rest of the directorial style.

Some moments in the flick, you’ll literally be laughing your arse off by how ridiculous everything is, and then the next second, you’ll be holding your stomach, just begging yourself not to barf all over the area in front of you. Case in point, try the dinner-table scene that occurs early on in the movie. Lionel’s mum is already infected, but she isn’t feeling the total side effects yet to the point of where she’s practically a walking corpse, but she’s sure as hell getting there. So, she spends this whole scene falling to itty, bitty pieces, while also somehow getting a small amount of her infected puss into some guy’s pudding. It’s literally the most disgusting thing you’ll see in the whole entire movie, and that’s really saying something. It’s one of the very rare times I’ve actually felt my insides curl up, but at the same time, still couldn’t keep myself from laughing to high heavens.

And that’s exactly what Jackson does here, and does well: He finds a balance. Many times throughout this flick, you can tell that Jackson wants to be goofy, and sometimes he wants to be serious. More times than not, he ends up coming off as just plain old cheesy, but that works well for the rest of the movie as it gives you the impression this guy knows what he’s doing the whole way through. Which is why once we get past all of the constant yammerings of the first-to-second acts, the movie kickstarts its heart, gives you all of the splattering gore, in-your-face and hilarious situations, right in front of your eyes. He also finds a way to continually find newer, cooler ways to show one of these zombies being hurt or killed, that keeps you on-edge the whole time, wondering just what Jackson is going to pull out of his pockets next. Usually, it’s something inventive that we’ve never seen done before, and even if we have, it still doesn’t matter because it’s a whole bunch of fun to see regardless.

That’s why, no matter what gripes I may have had with the meandering first and second-act of this movie, the way in which Jackson absolutely goes balls to the walls in the last act, more than made up for those problems and continued to put a smile on my face. Why Jackson doesn’t do more comedies like such as these, is totally beyond me. Bloody hell, he’ll do a melodrama about a teenage girl being raped and killed, and the investigation surrounding it, but he won’t return to his roots, if only for one movie or so? Bollocks I say! Bollocks!

Though none of them are big names in today’s day and age, the cast still do their jobs here, and they do them well. What I mean by that is all they are called on to do here is just be wacky, act as if they are constantly high at all times and be able to take a bunch of ketchup being thrown on their faces. All of them succeed at what they have to do, especially Timothy Balme who is constantly hamming it up the whole time, but still gives us a guy we can get behind to kill all of these zombies, even if he is practically the sole reason they’ve become such a large army. Even then, the dude still feels like he’d be willing to pull a chainsaw out at any moment, and I’m totally cool with that. Just keep it away from me.

Consensus: As ridiculous, as crazy and as over-the-top as you are possibly ever going to get with a B-movie, but Jackson’s non-stop stamps of creativity and total pleasure that obviously went into Dead Alive, make it a fun time, if you’re not squeamish. If you are, then stay far, far away from this one, ya hear?