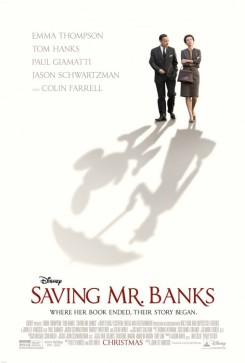 Famed author P.L. Travers (Emma Thompson) lives her life the way she wants to, which usually means that she’s pushed-off from the rest of the world around her, doesn’t care much for others, or even being known as “nice”. She’s just simply doing her, and from the flashbacks we get to see of her and her days as a little girl (with her daddy being played Colin Farrell), it all makes sense. However, she may have to stop her ways for awhile, or at least settle them down so she can get some more money in a way that she isn’t as up accepting of at first, but eventually decides to go through with, despite her obvious reservations. The job: Go to Hollywood, meet with Walt Disney (Tom Hanks), and see if they can both come to an agreement on making the tale of Mary Poppins that she wrote, come to life on the big screen. The two come to a stand-still in which they’ll make the movie, but she gets final say, cut and edit. Altogether meaning that she and Mr. Disney’s vision won’t necessarily meet the same standards, but that’s the movie business for ya, honey! Take it or leave it!

Here’s one of those flicks that I actually thought was going to do nothing for me. For the most part, I’ve never been a huge Mary Poppins fan, but having seen it more than times than I can actually count, I will say that seeing the back-story of how this movie came about did get my interest a bit. However, then I realized one key element to this movie that automatically turned me off: The fact that it was a Disney movie, talking about how the iconic-owner himself, got one of their classics made for the whole world to see. So basically, to me, that seemed like nothing more than a film company patting their own selves, on their own backs; for what their owner did, why it all happened, and how, even after all of these years, families and children from all-over-the-world still can’t get the grins off of their faces from this decision made.

So yeah, there was a lot of heat within me going into this flick but something happened. Actually, scratch that. Something REALLY did happen. Not just with this flick, but to me. Once all of the old-school Hollywood, self-pointing jokes were over and done with, I soon realized that there was something a bit more to this story that wasn’t as self-congratulatory as I expected it as being. In fact, very far from. See, this is one of those rare flicks, better yet, rare STUDIO flicks, in which the movie itself actually gives a hand or two for those who write the original stories that get made for big-budget productions and yet, also stick to their original vision. That surprised me, especially considering what the end-result of this story was, but even then the movie never seems to turn their backs on its main subject. Even the one who seemed to cause all of the trouble in the first place: Ms. P.L. Travers herself.

It would have been terribly easy for the movie to paint her as the cruelest, meanest and rudest witch in all of the land, and for awhile, that’s exactly what she is. Sure, she has her redeeming qualities about her in the fact that she can read, write and make the people around her rich, but she never seems like an actually nice person that me, or anybody else for that matter would want to be around. So when she does eventually decide to take the offer to fly out all the way to Hollywood and she gets all nestled-up in her suit, it’s easy to believe that she’s doing this more to find a part of herself out, be fun and happy again, while also reinvigorating a spirit within her that’s been tucked away for quite some time. Maybe I’m reaching here, but there are moments where wee see when, where and why Travers herself wants to change her ways, and though it does take an awful while til she does eventually do so, it’s done in a believable, honest, emotional and most of all, unmanipulative way.

Though there is definitely a large amount of bullshit to be had here in what actually happened during the filming of Mary Poppins, for the most part, it was easy to get by because this was really a flick about an artist, a writer, or a creator in any way imaginable, and how they stick to a certain vision they have, regardless of what others may try to say, do or change about it. As we all know, Travers does eventually give up the goods, suck it all up and let Disney get his way, as well as his hefty bags of cash, but it’s never like Travers herself gave up or quit. It’s just that she eventually moved on with the times and realized that there’s no use at all in fighting something, because we all got to get along somehow, and someday.

That’s why when people see that this movie has Walt Disney in it, those same people will be awfully surprised to see how much of it really concerns P.L. Travers, who she is, whom she was and the type of creative genius she could be if you gave her a pen, paper and some time on her own. And this is why Emma Thompson’s performance as Travers is so brilliant, because she gives us a shrewd, older gal who doesn’t put up with anybody’s crap whatsoever, and yet, we don’t really hate her. We get angry at annoyed at her, but we never want to raise our fists in the air and take a swing at her. Can’t say the same for the people that probably worked on making this movie come to alive with her, but hey, at least I knew that there was something more to her, which is what Thompson herself conveys so well. There’s a deep, sad and fragile figure at the center of this rock, and we get to see it chipped-away at each and every second we spend with her, but it doesn’t happen right and it never happens with strings attached. We simply see her go from mean, old, nasty bitch, to relatively pleasant, easy-going and okay-to-be-around bitch. She’s still a bitch either way, but a sympathetic one that’s easy to like when she puts a smile on, and just as easy to be angry with when she’s treating the others around her so inappropriately.

I think that Thompson’s definitely got a nomination in her midst and if that’s the case, I hold no objection whatsoever. The woman is, has and forever always will be a great actress and I feel like she is the only one who could have made P.L. Travers a lovely woman to be around, despite all of her bickering and nagging. In that general regards, she was like my grand-mom. Except that she actually makes me cookies! Love you, Gams!

Though the story is definitely more about Travers, Walt Disney gets some chances to develop over time, too, and rather than seeing a money-grubbing, shameless business-man, we legitimately see a guy who rose from nothing, to own this huge bedrock of an empire where people from all over the world come together to share one of the most beautiful emotions any human can share: Happiness. We get a couple of scenes where we see Hanks turn the charm-dial on and show us that he can easily sink his teeth into a role as Walt Disney, but there are some very few moments where we get to see a real human being underneath that whole facade we usually see in commercials or pictures. He’s definitely a charmer for sure, but he’s not always like that and when we do get to see the human-side to him, he’s believable and a sympathetic guy that I’d be willing to work with any day of the week. That, and the fact that he’s FREAKIN’ WALT DISNEY!

Everybody else surrounding this story that aren’t Disney or Travers are all great too, with Paul Giamatti, once again, coming off with the best supporting role here, despite being the only made-up character in the whole flick. Giamatti plays the limo-driver assigned to lugging Travers around left-and-right and while at first, they don’t really get along despite his best intentions, they build a nice friendship that would seem cloying and schmaltzy in any other movie, with any other two actors, but with Thomspson and Giamatti, it works wonders. Same goes for Colin Farrell who plays Travers’ alcoholic daddy-o that runs into plenty of problems through these flashbacks, and while they may not work the best to the film’s ability, he’s still lovely, charming and easy-to-like, despite being a very flawed person. I wanted to see more of Farrell here, just not done in a way that bothered me when it took away from the real story: Everything happening with the big-screen development of Mary Poppins.

That’s what brings me onto my only real problem in which the movie did focus a bit too much on Travers’ life, as well as her back-story. It’s fine that we got to see where she came from and what exactly made her who she is today, but we get so many damn flashbacks, that it slows everything down that we see in Hollywood. Those scenes where we witness Travers growing up as a little girl, and all the sorts of hard-ships she went through, are definitely the back-bone to the story that was Mary Poppins, as well as this movie itself; however, you can also tell exactly when they’re going to come up, what they’re going to show and how they correlate to the story of Poppins itself.

Then again though, I bitch and I complain about these flashbacks, but yet, later on in the movie is where it also really got tugging on my heartstrings and brought out the tears within me. I don’t want to say how, when or why this happens, but it just happens and it will completely take you off-guard. Mostly because it’s done so in a way to where you know it’s going to try its hardest to make you cry in the way that most biopics normally do, let alone movies directed by John Lee Hancock himself, but it never begs you to. It just simply allows you to and I have to say, I allowed it. I fell victim and I cried. Didn’t make it a perfect movie by any means, but I’d be lying if I didn’t need at least two tissues by the end of this. At least.

Consensus: Could have easily been the type of off-putting movie that cracked jokes about Hollywood, while simultaneously hugging itself at the same time, but somehow, Saving Mr. Banks is the furthest thing from that and instead, gives us a real story, of a real person that speaks for all of the writers out there when one has a vision, wants to stick to it and won’t settle for less. But, also realizes that there is a time to move on and most importantly, a time to adapt and go on with the times.