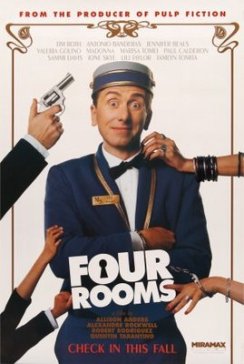 People will do anything for a tip.

It’s the first day on the job for Ted the bellhop (Tim Roth), and from what it seems like, it won’t be a very pleasant one. Early on, he gets told the ins, the outs, the what to do’s, and the what not to do’s on the job by an aging, supposed retiring bellman that gives him an idea of what he should expect taking people’s luggage up to their room, answering their phone calls and the most important of all, waiting on them for a tip. So with this all out of the way, Ted gets ready for one of the biggest and most hectic nights of the year, New Year’s Eve. And what do you know it? Ted’s night ends up being an eventful one, albeit one that he finds his life threatened on more than a few occasions. But it’s all in the good name of a sizable tip, right?

Like with most anthology films, the idea here seems smart and somewhat nifty: Get at least four low-key, up-and-coming indie film-makers, give them a budget and give them free reign to basically just strut their stuff for no less than 20 minutes each, slap the Miramax logo on it, and release it to the mass-audience. Seemed like a really promising idea that could have worked wonders for all of the film-makers involved, but somehow, it more or less just ended up killing two promising careers, while just injuring two others.

Take a wild guess as to whose career’s were killed, and which ones were just injured for a short while. Not that hard I guess, but let me just tell you through my usual-way of reviewing anthology films; taking it one-by-one, segment-by-segment. Shall we?

1. The Missing Ingredient – This is the one that starts it all off, and that’s not a good thing at all. In short, this segment is easily the worst. It made me feel like I made a huge mistake actually even bothering with this movie. Director Allison Anders gives us a cool idea in which a coven of witches who need male sperm to complete their ritual and just so happened to choose Ted as he comes stumbling on in. While the ground-work was there for this to be not just hilarious, but all sorts of weird and cooky, in a fun-way, Anders doesn’t even bother going anywhere with this. Sure, for horny dudes, there is plenty of hot boobage to be seen, but for anybody who wants a little bit of craziness mixed with their covens, will be most likely disappointed as Anders seemed to really drop the ball with this, and not know what’s considered “funny”, and what’s considered “boring.” Easily the worst out of the four, but it’s not like the next one is a peach neither.

2. The Wrong Man – Things seem to get a bit better with this segment, however, not by much. Director Alexandre Rockwell keeps things small and subdued, but not anywhere near being considered “sweet”, as this whole segment just meanders endlessly, without ever really moving outside of the actual hotel room it’s placed in. The whole story is in which a married-couple (Jennifer Beals and David Proval) basically plays this little sex-game where he pretends that she’s been screwing around him and picks out whatever poor fellow just so happens to stroll through that door, interrogate him, wave a gun in front of his face, take his pills, and basically, just scare the shorts off of him. There are moments in this segment where the wheels seemed to be turning and there seemed to be some moments of promise, but once the segment is all said and done with, I couldn’t help but feel like it went on a bit long. Especially once Beals’ character just started yelling out any term for the word “penis” she could think of right away. Sure, it made me laugh (probably my first one), but it was only because it was a random moment of creative spontaneity that the first segment didn’t seem to have.

Thankfully though, it does get better from here and begins to feel like something worth watching, rather than the first two awful-pieces.

3. The Misbehavers – Antonio Banderas plays a tough and sinister father-of-two that wants to take his wife on a night out on the town, in hopes of getting laid and therefore, igniting the spark in their marriage that probably sizzled-out once kids came along and screwed everything up. But, knowing that these same kids can’t come out with them, he decides to intimidate Ted intoi watching over them, and making sure that they “don’t misbehave”. It seems easy, and with the price for this little mission being $500, it seems even easier. However, with these two kids, nothing is quite as easy as it seems and eventually, the room itself starts to smell and once that happens, all hell breaks loose. So yeah, the plot-line for this segment is dumb, but with Robert Rodriguez behind-the-wheel, it’s anything but. Actually, that’s not true. It is still dumb, but in a “fun” way in which one can only associate with Rodriguez and his style of film-making. It starts off simple and small, but as time goes on, and Rodriguez really gets the brain working, you can see just how much havoc he can throw on top of the other and once all is said and done and we get the final-line of this segment, you know that, if anything, the whole movie was it at least worth it for just this whole time-span of 15-20 minutes. It doesn’t even matter if the last segment blows, all we know is that this is the segment people should be wanting to see and talk about.

But of course, the last segment is done by none other than Quentin Tarantino himself and, as we all know, the guy has a bit of a thing for stealing the spotlight of movies, and his segment here is no different.

4. The Man from Hollywood – The plot-line is simple: Ted stumbles upon a bunch of fast-cat, Hollywood big-shots (Bruce Willis being among them), who con him into doing something for a hefty price, as idiotic as the act may be. Oh, and there’s a bet involved somehow, someway. Basically, being that this is a Tarantino-segment, you can expect a lot of witty lines that involved pop-culture, violence, sex and a bunch of other talk that doesn’t sound like it’s coming from actual human-beings who grace us with their presence on the same planet we call Earth. That said, considering the rest of the film that came before this, it’s a blast to watch, keeps you interested, laughing, a bit tense and overall, entertained as if Tarantino was the one they really were leaning on for this to work and that’s exactly what they got. In hindsight, it’s not the best thing that Tarantino has ever done or touched (especially when also speaking of his acting), but when you place his segment against the three others, his definitely comes out on-top and a reason to see this whole film. Although you do have to get through two shitty segments, and one pretty good one.

And through all of these segments, there’s none other than Tim Roth himself acting his ass off through them, which is not a good thing. For some odd reason or another, Roth is given the order to carry-out this overly-used, spastic-twitch of his that carries on throughout most of his segments in which he stammers and bumbles more than Hugh Grant on a bad day. It gets old real quick and just becomes random, as if there was no other reason to make this character interesting than to just have him do and say all of these odd things. Roth tries, but he can’t help but suffer due to doing whatever it was that he was told. However, when he’s told to dial it down a notch and just let the segments for speak themselves, is usually when he’s at his most watchable, as well as the same could be said for the movie itself. And mostly, this occurs during the last two segments. Strange how things work themselves out, right?

Consensus: If you counter in the fact that only two of the four segments in Four Rooms work, then I guess you could consider this “watchable” in the least bit. But, then again, if you want to save yourself some precious time, effort and/or money, then just watch the last two segments somewhere on YouTube. I’m sure you’ll be able to find them somewhere.