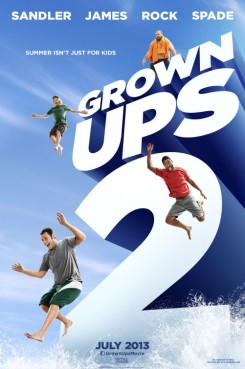 When Rob Schneider doesn’t show up, you know you’re in trouble.

This is going to be quite a difficult task because, all joking aside, there is no plot here. Basically, it’s just four middle-aged men (Adam Sandler, Kevin James, Chris Rock, David Spade) spending a day together where they fart, burp, sneeze, get peed on by a deer, start fights with fraternities, go skinny-dipping in lakes, ogle over hot, young and busty women, love their kids, wife, family and at the end of the day, try to have a good time by throwing an “80’s-themed party” where they try to relive their glory days when times were simpler and a lot less shitty when they didn’t have responsibilities to deal with.

And yes, I was reaching to try and come up with something there that made sense, but let’s face it: A plot does not matter for this movie. All that matters is that these guys get to make fun of other people around them, act like fools, commit acts as if they were young, wild and free, all over again, and fart A LOT. That’s pretty much all there is to this movie and though you can definitely say that I deserve any sort of pain I may have garnered from watching this movie, even though I clearly knew it was a train-wreck from the very beginning, I just couldn’t help myself.

I’m a two-bit movie critic, yes, but I’m also a movie lover, and I have to watch EACH AND EVERY SINGLE MOVIE that I can possibly see, dammit!

So, in this case, curiosity did in fact kill the cat and I decided to actually give this a watch. No, I did not expect greatness and no, I did not expect to even laugh a single bit, and well, that’s pretty much what I got. None of this ever funny, and it just seems like everybody involved is either slumming it all the way down to hell with what they think is mildly amusing, all for the sake of a nice, healthy paycheck, so that they can continue to go on and make more shitty flicks that nobody in the world with the least amount of self-respect would want to go see. Or, if they did somehow get roped into seeing it, that they would at least not enjoy themselves while watching it.

There are jokes that miss, there are jokes that fall flat, and then, there are jokes that hit the ground, dig a hole into the Earth’s core, cause an eruption of destruction, havoc and mayhem, which only pleases those who have a sheer fondness for deer’s urine. Seriously, this movie is not funny. I chuckled maybe once or twice, and you know why and by whom? Fuckin’ Taylor fuckin’ Lautner! That’s right! That freakin’ stud from the Twilight movies, is the only funny thing in this whole movie that not only has Adam Sandler, Kevin James, Chris Rock, David Spade, Salma Hayek, Maria Bello, Colin Quinn, Tim Meadows, Maya Rudolph, Andy Samberg, Steve Buscemi, Taran Killam, and Shaquille O’Neal, but even has Stone Cold Steve Austin for lord’s sakes! I mean, WHAT THE HELL?!?!? How does a travesty like this even occur!?!?!

And you bet your sweet rumps that I mentioned all of those famous, well-known names for a reason, because here are all people that have shown us, many, MANY other times in the history of this world, that they are capable of making us laugh and entertain the hell out of us. So therefore, you’d think that a movie that has all of their talents involved with one movie would clearly be the laugh-out-loud riotous-fest of the year, let alone the decade, right!?!? Well, no!!!!! Apparently, nobody here seems to have a clear idea of what constitutes being considered “funny”, “humorous”, or even “smart” for that matter. It’s all dumb, it’s all painful to watch, and it’s all so damn freakin’ sad because everybody here is talented and can do great, amazing things for this world, but none of them ever made me laugh or have a good time.

Except for FUCKIN’ TAYLOR FUCKIN’ LAUTNER.

Seriously though, everyone, I do apologize for cursing up a storm. You don’t normally see this side from me and you sure as hell don’t see me so enraged over a movie like I am with this, but there’s all a reason that I will continue to hammer over the head to death with: Everybody here knows better (with the exception of director Dennis Dugan cause, quite frankly, that guy doesn’t know shit about anything good). I always love to consider myself a huge Adam Sandler fan because I’ve always felt like the guy has a keen-sense of humor that is a bit on the dumb side, and definitely isn’t for everybody, but he’s made me laugh and that’s fine for me. He’s even shown us all some interesting sides to his acting-abilities by taking up some very interesting roles that seem to always work, as well as earn him respect from people who have always considered him an imbecile. So why the guy decides to keep on destroying his credibility as a comedian, is totally beyond me. All I do know is that he needs to quit making these types of fucking movies, and he needs it do it right fucking now. It seems like the year of 2014 definitely has him stepping in that right direction, but there’s always another one of these piles of excrement just peaking around the corner.

Same goes for the rest of this cast, mainly the three other numskulls that help him out with this movie. Chris Rock is by far, without a doubt in my mind, one of the funniest comedians who has ever lived and will continue to be so, regardless of how many of these shitty movies he decides to be apart of; Kevin James makes everything he shows up in, just a bit better by doing his normal, Chris Farley-shtick, and he’ll always garner a “pass” from me, due solely to the fact that King of Queens was one of my favorite shows growing-up; and, no matter what the haters may say, David Spade makes me laugh. I’ve seen a few of his stand-up specials and he’s always made me laugh-out-loud quite a few times, as well as the work he puts into the nonstop sitcoms he shows up in as well. So yeah, from what we know and see, these guys are able to be funny and just have us enjoy the hell out of their presences, but why they all continue to do junk like this makes me ponder my fan-dom and respect for these guys all of the damn time.

It’s a damn shame too, really, because these are the types of guys that comedy should be looking-up to and saying, “This is how you do it”. Nowadays though, it’s just the same old routine we seem to be getting from these folks, mainly Sandler: Get a bunch of money from Happy Madison; get the same cast, crew and buddies to work; cobble-up a plot that doesn’t even have to be cohesive in any way, shape or form; write-out a script that concerns a lot of bathroom humor, sex jokes, homophobia, and messages about how family matters; film in some back-lot that makes every movie look like it was filmed on the sun; make sure that the movies feature cameos from anybody that’s even the slightest bit considered a “celebrity”; and most importantly, DON’T FORGET ABOUT THE PRODUCT-PLACEMENTS. Wouldn’t want to lose any money over that, now would we?

But yeah, you can tell that I pretty much hated this movie, but this one hits even closer to home because it shows you just how easy it is for somebody to get junk made, solely because they’re famous, and have money, power and all the string-pulling one person could possibly get. The first Grown Ups already made showed that statement to be true, but this one, on the second go-around, we already know what to expect and yes, it is a whole lot worse this time around.

However though, this one does have FUCKIN’ TAYLOR FUCKIN’ LAUTNER around, and I guess you could that there’s at least a “slight improvement” to be found there? Then again, maybe not. Both movies fucking blow and please do whatever you possibly can to stay the fuck away from them. Mainly this hour-and-a-half-long show-reel of human feces.

Consensus: Without thinking about this too hard, or even trying to dig in deeper as to what the real problem with Grown Ups 2 is, it doesn’t matter. The movie’s not funny, hard-to-watch and an example of exactly how low Sandler and all of his buddies will go to make some more money, and continue to make more piles of dung that are exactly, if not worse, than this.