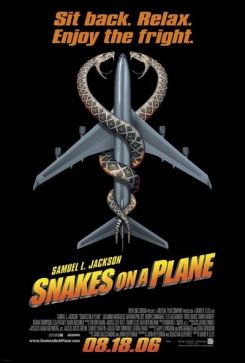 It’s all in the title, folks.

This is going to be a bit of a struggle, but I’ll get through it somehow. Anyway, the story goes a little something like this (I think): Agent Neville Flynn (Samuel L. Jackson) boards a plane in order to protect and guard a key witness (Nathan Phillips) in a crime he is investigating. There seems to be no problems whatsoever with the flight once it first gets off and running, as there are plenty of fun, vibrant people from all walks of life gathered together to reach their destination of L.A. However, there seems to be one problem, and one problem only that nobody on-board ever anticipated: Fucking Snakes, man! Snakes are on this motha fuckin’ plane!

So yeah, as you can tell, I didn’t really have to go into too much detail with that premise, because it’s all pretty simple: There are snakes, who are very high, that also just so happen to be on a nearly-packed plane, where nobody is expecting these sorts of mofos to come right at them as they put on their gas-masks. Sure, you could say this is terribly stupid, and if you did say so, I wouldn’t hold it against you one bit. In fact, I’d applaud you for at least noticing the sheer-stupidity that comes along with a movie when you’re title is in fact Snakes on a Plane.

However, I would hold it against you if you weren’t the slightest bit interested in seeing something like this, because even the reprehensibly idiotic movies have to have at least something worth seeing, right?

Well, I’d say have to say yeah, because this is what happens when you take your B-movie premise, your B-movie title and a meager-enough budget to make something that’s not only quite dumb, but actually know that it is, not try to make any mistakes by adding unnecessary melodrama and give it all you got. Because hey, if you fail at making a dumb movie, you’re just a terrible person who should never work a movie camera in your life ever again. Just saying, but it’s true.

Thankfully though, director David R. Ellis knew exactly what he was getting himself into with this kind of material and doesn’t step-back once from pushing it over that extra-step into total “crazy town”. Think about it, when all you have is an-hour-and-a-half-movie dedicated to snakes on crack, slithering around, eating and killing people in whatever possible way you could imagine, you have to have a bit of fun, right? Hell yeah! And that’s why Ellis, deserves credit here for not trying to get too serious here or too dry. Sure, the humor is pretty awful, and so are most of the lines, but at least the guy doesn’t focus on them too much in hopes that people catch onto that aspect of the movie and have an even better time with it.

That would have definitely helped, but I think Ellis was fine with just relying on the action, tension and pure fun of watching some dude’s junk get attacked by an Anaconda. Especially when your target-demographic for something like this is drunken-teenagers, then you have to give them what they want, and that’s boobies, banging, blood, snakes, guns and Samuel L. Jackson yelling, screaming and doing whatever the hell he wants.

And yes, I did just spell-out your recipe for “What Makes an Awesome Movie”. You can all thank me later when you’re rolling in the hundreds of millions and billions of dollars.

But once again, I know I’m stretching it a bit here trying to go into this as much as I can, with as much detail as possible in order to have your opinion swayed on this in any possible way whatsoever – but I really can’t. All it really comes down to is whether or not you’re willing to put-up with a bunch of talented-people, yelling some cheesetastic lines, running away from CGI snakes and, at the end of the day, trying to look as if they aren’t doing it just for a paycheck. Maybe some of them are, but that’s not the point; the point is that this is a movie that realizes it’s not made for those who want to see a piece of grand cinema.  In fact, they’re much more attuned to the movies that don’t need much thought or even plausibility; just expectations of pure schlock, craziness and fun. That’s all.

People nowadays go out and see something like Sharknado, or Croctopus, or whatever animal-and-natural-disaster-equation you can come up with, for the pure fact that they are going to see something that isn’t weight, isn’t thought-provoking, and sure as hell doesn’t need to be seen with a clear mind. And there is absolutely, positively nothing wrong with that, because sometimes, when done right, those types of movies can work all sorts of wonders. In ways, they can make people laugh their assess off; in other ways, they can even go so far as to transport that viewer into a whole different world where nutty shit happens, just for the sake of pure entertainment. Now, I don’t know what any of ya’ll out there think, but isn’t that the whole point of going to the movies in the first place? Sure, you want to see those real heavy, real dramatic and real life-changing pieces of film where you can’t seem to get its memory out of your head, nor can you stop allowing it to affect you and your daily-life. Those movies are all fine and dandy, but when I want something to be in front of my eyes, not only entertaining me, but not trying to make too much room in my head, for it to pick my brain to pieces and leave me in whatever shape it leaves me in, I’ll go with something like this. Not saying you totally should, but give it a whirl and see what happens.

But hey, don’t just listen to me, let Samuel L. tell you what it’s all about. Oops, wrong one! But you get the idea.

Consensus: Undeniably stupid in every aspect of its existence, but that still doesn’t keep Snakes on a Plane away from being a good time for anybody who wants pure, unadulterated, non-thought-provoking fun for a quick hour-and-a-half.