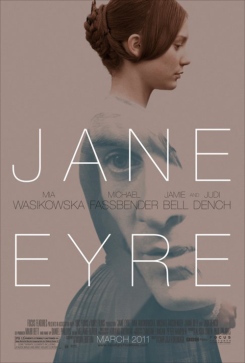 Relationships were so much simpler when people weren’t just boning each other all of the time.

Jane Eyre (Mia Wasikowska) is an orphan growing up in 19th Century England who doesn’t always get along with everybody around here. That’s why, one day, her evil auntie (Sally Hawkins) sends her to a tough-as-nails boarding-school, where she is taught how to act around people, be lady-like and just not bust people’s balls, like Jane is most known of doing. Once Jane gets out of this boarding-school and finds herself starting her adult, professional life, she’s assigned as governess for a young French girl at a nearby estate. The girl’s father, Edward Rochester (Michael Fassbender), is also the master that employs Jane and is a bit of a troubled-fellow. He’s got a bit of an anger-issue, has some deep, dark secrets and definitely doesn’t seem like he’s capable of handling himself in public situations, and yet, he is somehow able to connect with Jane. Together, they talk, walk through beautiful landscapes and, slowly but surely, begin to fall in love. However, things get a bit more complicated once Jane finds out something about Edward’s rocky-past, as well as her own.

I don’t feel like I’m alone when I say that I automatically cringe hearing about a new period piece. No offense to anybody who likes those sorts of things, but they just aren’t totally for me, unless they are done in some sort of fast-paced, interesting and fun way. That almost never, ever happens, but I hold-out hope that I do get one of them, one of these days.

Anyway, that’s the exact reason why I wasn’t looking too forward to watching Jane Eyre, a story that it seems like everybody else on the face of this planet knows, except for, you guessed it, yours truly. Then again, I’m a movie-junkie and I have to give any movie a chance, which is what I’m really thankful for here.

See, something strange happened here with me and this movie: Not only was I interested in this story right from the beginning, but I found myself oddly surprised as well. Most of the opinions people have about 19th-century period-pieces is that they are sometimes so royal, so stuck-up and so damn boring, that they can’t help but be slow and let us know that this is how the times were back in those days. However, it seemed like director Cary Fukanaga knew that he wanted to tell us this story, but not harp on the minuscule, meaningless details.

Right from the start, as soon as we find out that Jane has had a pretty shitty childhood, things pick up and automatically, we are thrown into this place in time that not only feels real, but still relevant in our day and age. Sure, the themes of love, acceptance and feminism are everlasting and will more than likely stand the test of time, but what Fukanaga does here so well is that he shows us that not all period-pieces have to be time-consuming, regardless of if they are moving at a snail-like speed. He gives us a story, he gives us a setting, he gives us characters, and he even throws in a bit of a mystery, that somehow goes along perfectly with the real dilemma on our hands here: The love-dynamic between Jane Eyre and Edward Rochester.

Considering that I haven’t read the novel, like the lazy, Y-Generation-er that I am, I don’t know if this dynamic was as strong, or as tension-filled in the book, as it is here, but Fukanaga really nailed that aspect down perfectly. We get the idea that these two people are perfect for one another and, had they been alive today in the present-day, would be together today, walking hand-in-hand, frolicking through the streets. But, seeing as this is the older days when class and wealth was more meaningful than actually having a life, it makes sense why they find it hard to be together, or accept the notion that they should be together. Any other movie would have this whole idea be stretched-out into a two-hour cock-tease, but here, Fukanaga continues to add on emotion, after emotion and give us the impression that they might just get together, despite what others would whisper about them.

They’re not necessarily star-crossed lovers that nobody wants to be together, it’s just more of the fact that they don’t know if they should, or should not be, and it takes us for a ride. Also, a lot of that has to do with the fact that both of these characters were well-cast with Mia Wasikowska and Michael Fassbender. Everybody knows, and loves the hell out of Michael Fassbender by now, so it’s honestly no surprise that I say he does a great job Edward Rochester – a guy we never know if we can fully trust, but like enough to feel like he should be with Jane at the end of all this.

However, who I am really going to focus my attention on here is Mia Wasikowska, who I’ve never been too impressed with in the past, but I will say one thing: She chooses some great material to work with and continues to really stretch herself. Here, as Jane Eyre, she gets the chance to sink her teeth into a woman that doesn’t just stand-up for herself every step of the way, but also makes sure that no man, woman, or child gets in her way of acceptance. What’s so rad about the character of Jane Eyre is that she gains respect and gratitude from those around here, not just by pretending to be as tough, or as cool as a man, but by using her smarts to out-do those around her. Because of this, we’re able to see that all of these others around here are either dumb, over-the-top or are so relaxed in their monotonous, peaceful lives, that they have no clue what to do when somebody comes around and shakes things up by shedding a little lip here and there.

So, to sum it up: Jane Eyre is a pretty awesome female character that I feel like any and all gals should definitely look up to and go by, regardless of whether it’s from the book or the numerous film-adaptations of it.

But like I was saying before, Mia Wasikowska does a phenomenal job as Jane Eyre, giving us a pretty kick-ass female character that doesn’t need to actually participate in the act of kicking ass to prove that she’s a toughie; she just acts like she always has and never lets anybody walk over her. Great job on Wasikowska’s part, but also Fukanaga’s for at least giving us a reason to love her presence, not just solely by her gorgeous/mysterious look. There’s actually development to her and for that, we appreciate her being around. As for everything else that Fukanaga does in this movie, it’s all fine. By the end though, it does get a bit twisty and turny, almost to the point of where it all feels over-stuffed, but overall, the guy keeps his head clear enough that we’re able to see why this story deserved to be brought-to-screen once again, with these talented-people and all.

Consensus: For those who shutter at the idea of Jane Eyre being adapted again, fear not, because what we have here is a well-acted, emotional and rather suspenseful-tale of forbidden love, class-conflicts and a hard-ass female character that mouths off to almost anybody, and everyone around her. But in a dignified, 19th Century, period piece kind of way.