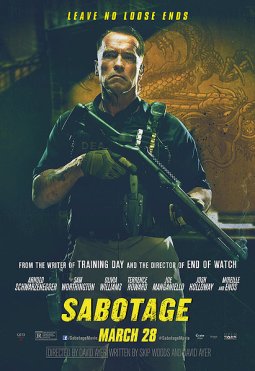 If it was more like the song, we’d be better off. And yes, I do mean the same running-time as well.

During one raid on a drug cartel’s safe house, an elite DEA task force, led by a bad-ass known as “Breacher” (Arnold Schwarzenegger), find all of themselves stuck at a bit of a crossroads: Either get rid of the money and act as if they never saw this many of billions and billions of dollars; or, take most of it all for themselves and blow up the rest? Well, being that these peeps aren’t all that sane or smart in the heads, they decide to go with the later-option, thinking that no harm whatsoever could come of it. How wrong they were. Because see, when these lovely gentleman’s and lady go to fetch the money they’ve left for themselves, they find it all gone, therefore raising the government’s suspicion on their missions and what it is exactly that they do. Things get even worse when, six months later, two members of the squad turn-up dead, which automatically leads each and every person to the conclusion that whoever is doing this, is getting revenge for their money being stolen/destroyed. This is when Investigator Caroline Brentwood (Olivia Williams) is called on to the scene, even if she is a bit out-of-her-reach with how twisted and disturbing this case turns out to be.

In all honesty, I truly am glad to see Arnie getting his full-on, big screen comeback. Seriously, I am. The guy more than deserves it. Besides when is it never a pleasant sight to see when one of your childhood, film-heroes gets put back on the big screen for another go at the movies?

However, the movies that Arnold has been trying to re-invent his career with, well, haven’t been so great. The Last Stand was okay, if tonally off; both of the Expendables featured what seemed to be him just hanging out on-set for a day or two, collecting his paycheck and saying, “I’m back”, more than a hundred-and-fifty times; and Escape Plan, despite being with another one of my childhood heroes, Sly Stallone, still wasn’t exactly what I had in my mind when I imagined those two getting together for a long time in a full-length, feature-flick. Don’t get me wrong, I enjoyed all of these movies, but I still can’t help but have the feeling like I’m being let-down by one of my favorites.

That’s why when I saw something as brutal, gritty and relatively “different” for Arnie to tackle, even as late as he may be in his career, there was a part of me that still got that urge to get right up out of my seat and into the nearest theater right as soon as possible. That’s just how much I truly do love and adore Arnie, even if he has had a couple of missteps along the way. Then again though, what major, motion-picture movie star hasn’t?!?!?

You could say “Brad Pitt”, or “Leonardo DiCaprio”, or, if you really wanted to ruffle some feathers, “George Clooney”. But okay, fine! That’s not the point! What my point is, is that I was excited and interested in seeing what this was going to turn out to be, yet ever so hesitant as well.

Where I think this movie mostly fails, is in the writing of David Ayer. Now, I know what most of you are probably thinking, that this is the same guy who wrote both Training Day and End of Watch, two great cop movies about cops being, well, cops, and with all of the added-on badassery that just comes along with the job. Though I don’t love those two movies nearly quite as much as others do out there in the world, I still give Ayer the benefit of the doubt for at least shedding light on our men and woman in uniform, while also showing them as being “humane”, and not just a bunch of chumps who have nothing else better to do than pull people over, give random tickets, and eat Dunkin’ Donuts. He clearly has love and respect for those in blue, which translates well into his screenplays, making them more character-driven than any other cop movies out there.

However, here with Sabotage, something went terribly wrong. Not only is the screenplay terrible, with lines of dialogue that even someone like Michael Bay would even scoff-at, but every character you see here is as thin as Kate Moss in her prime, if that. Nobody here really seems to have much of a soul, conscience or mind when it comes to doing what it is that they are supposed to do, which is ridding this world of drugs, those who supply it and the dirty money they make off of it. These are the types of people we’re supposed to feel safe with, knowing that they are out there trying to eliminate the scum from our streets; but here, with these buffoons, I felt the exact opposite.

The DEA task force we’re told to sympathize with early-on, feel like a bunch of crazy, high-as-hell misfits that don’t do drugs. Instead, they just get high on holding guns, throwing on their bullet-proof vests and getting out there, and lighting some people (or anything they can get their hands on) on fire. Ayer portrays them all as a bunch of dysfunctional, nearly-psychopathic nut-jobs that you’d never want to be at a party with, let alone want to hear on the receiving-end of your drastic, important 911 call. They’re the kind of people that would much rather be guzzling down some brews, getting in their cars and driving down to the nearest jail-house where they can most likely beat the hell out of whatever sad-sacks got stuck in the slammer for the night and piss on them when they’re down.

I know I sound a little extreme with my description, but I’m dead serious; these people are whack-jobs and barely any of them are worth your time. Not even Arnie’s “Breacher”. Hell, I’d say that Breacher is probably the weakest-character Arnie has played in awhile, if only because Ayer relies on him too much for acting. It should be a common-known fact by now that even though he may be one of the biggest and respectable names in the movie world, Arnold Schwarzenegger is not all that good of an actor. In fact, he’s probably a lot worse than he was before, only due to the rust he’s acquired after all of those years of being the “Governator of Kellyfornia”. So, when Ayer is asking Arnold to deliver lines, as painful-sounding as they may be, you can’t help but feel bad for the guy; you can tell he’s struggling and wants to make the best of what he’s given, but he just can’t. The writing is too cheesy, too serious and too over-the-top, but not in a fun way.

Actually, that last aspect could be said for just about everybody else in this cast: “Over-the-top, but not in a fun way”. Every talented person ranging from the likes of Sam Worthington, to Joe Manganiello, and to even Terrence Howard, are all given crazy stuff to work with here, but come-off like they are either trying too hard, or not even trying at all. The only one who really gets out of this whole show alive is Mireille Enos, showing the world that she’s more than just that strong, silent type she played so effortlessly on the Killing; somehow, she can be a bit of a bad-ass chick that’s more than willing to hang, spit, drink and fight with the boys. Didn’t think the girl had it in her, but glad to see that she’s got range.

As for the rest of this movie, those who want to look past character-development, writing and acting, and just focus in on the action, may find themselves a bit pleased. Well, that’s if you’re type of “pleasurable action” revolves around people knocking-over doors, silently marching from room-to-room, and then, all of a sudden, shooting-down baddies, left and right, with blood spewing everywhere and anywhere.

Speaking of which, this movie is pretty damn gory, but gratuitously so. There’s always someone getting stabbed, or shot, or nailed to ceilings (yup, that does happen), and as shockingly brutal as it may be to see, it doesn’t really add much to the whole film in general. It just makes it seem like Ayer probably had more Heinz just waiting around on set, so he thought, “Why the ‘eff not?!?! Everybody loves A LOT of blood!!” I guess they do, but I don’t. At least not in this case, that is.

Consensus: Sabotage clearly wants to be a mean, ruthless and brutal action-thriller with lots of bad-ass moments and bad-ass characters, but ends up being dull, stupid and quite laughable at times, despite being so damn serious.