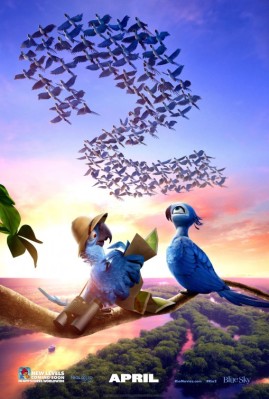 You’re the last of your species! Now, stay indoors and shut up!

Now that both Jewel (Anne Hathaway) and Blu (Jesse Eisenberg) have fallen-in love and even started their own family, it’s about time the cracks within the relationship show. Jewel is still that fun, adventurous-type, like she believes every blue macaw bird should; whereas Blu is still sort of like a human, equipped with making pancakes, using a GPS to navigate from place-to-place and even allowing his kids to use technology. Adding more tension is when they both find out about another breed of blue macaw’s that are apparently somewhere out there in the middle of the Amazon. Seeing as this may be their time to find others just like them and hopefully get some excitement in their lives, Blu and Jewel, along with their three children, decide to take a trip out to there, where they stumble upon all sorts of birds that are just like them. Heck, one of them even just so happens to be Jewel’s father (Andy Garcia), whom she thought was long gone by now. So yeah, it’s a nice place where all blue macaws live in perfect harmony with one another, except for when a certain entrepreneur decides that it’s time to start making more paper, and cutting down all of the trees in the Amazon, threatening everything that these birds have made their sanctuary.

As most of you may, or may not have seen, I was actually very surprised by the original Rio. Not only was it a fun movie that made me sort of feel like a kid again, but it didn’t really need to do much to surprise or even shock me. It was just exactly what it was – an animated movie made for the whole family. Sometimes, those types of movies can be utterly cheesy and only work for those little ones who don’t know any better, but other times, they can actually work for everyone who decides to take some time out of their day and give it a try. That’s what the first Rio was. Its sequel though?

Meh. Not so much.

Actually, not at all.

See, with the case of Rio 2, as is the case with any major-motion sequel, everything that worked so well in the first movie, is now re-amped with more of everything. Here, we get more vibrant colors popping out at us; more subplots that don’t need to inserted into here at all; more characters added in; and just more, more, more! And usually this is done to really keep us interested in what is going, while to simultaneously keep track of which characters, are doing what things, for what reasons, but here, you almost never get the sense that anything is happening.

While I may have written the plot-synopsis up top as being a simple story of Blu and Jewel going on an adventure to the inner-levels of the Amazon for a happenin’, joyous good time, there’s actually plenty, PLENTY more where that came from. Remember those birds that were voiced by will.i.am and Jamie Foxx that were always singing, being hip and saying sassy stuff? Well, yeah, they’re here again, and apparently, they’re looking for cast members for their latest production they’re going to put on for Carnivale. That’s all fine and dandy. Not like it’s going to make, or break the movie. In fact, you need a subplot like this to bring some much-needed comedic-relief to this flick.

However, like I alluded to before, there’s plenty more where that came from.

Blu’s human-owner, voiced by Leslie Mann, is with her scientist hubby, voiced by Rodrigo Santoro, and they are running all throughout the Amazon as well; Jemaine Clement’s villainous-character is back around and looking for vengeance for what Blu did to him all those years ago, but this time, has an admirer constantly behind him; Jewel runs into an old friend of hers that may, or may not actually be interested in her; and oh yeah, before I forget to mention it, there’s also sort of a subplot about one of Blu’s daughters wanting to break out her shell and get involved with everything, without getting too involved to where it isn’t deemed “cool” anymore.

So yeah, as you can tell just by reading that, all of those subplots are a bit too much for any film, let alone a kids movie that runs about an-hour-and-a-half, give or take. It’s too much for any kid to keep track of, but better yet, it’s too much for a movie that wants to be so playful and simple. It just takes all of the fun out of what could have been something exactly like the first, except maybe a bit better. That doesn’t happen though, and while it may not all be terrible (the song-and-dance-numbers are just about the only elements working for this movie), it still made me want to watch the first one all over again, just to get the memory of this dull movie out of my mind.

Okay, maybe it wasn’t that god-awful, but you get the point. Could have been a good, escapist time if it stuck to its cards, but it didn’t. So therefore, it was just “meh”.

As for the voice-cast that’s all returning, nobody is really outstanding; then again, nobody else is really all that bad either. They are just seemingly doing what they did in the first movie, and that’s it. The only one who is still slightly amusing to listen to is Clement’s Nigel, who is still funny when he’s vindictive and angry, but also has plenty of moments where we see his character as being more than just a “villain”. It was interesting to see that happen in a movie that seemed to be so distracted by everything else going on, that they’d actually allow for some neat character-development to actually happen. See, it’s just the little things that make a movie slightly better than what they should be. If only that transitioned well into the rest of the movie, then I would probably be singing a different tune. Not that I can remember any of the songs from this movie in the first case.

Consensus: With too much going in every spectrum of it, Rio 2 ends up being a jumble of many different strands of story, yet, barely any of them ever excite or intrigue one bit.