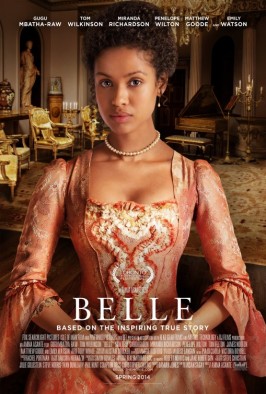 Good thing she didn’t have to wear one of those horrendous powdered-wigs.

When Dido Belle (Gugu Mbatha-Raw)’s mother dies, her white, Royal Navy officer father (Matthew Goode) takes her in and leaves her at his uncle and aunt’s (Tom Wilkinson and Emily Watson) place, in hopes that she’ll not only be treated fairly, but also have the same wealth, tender, love and care that he had. It’s hard considering that Dido is of mixed-race, which means that more than a few people will whispering about her, but the Mansfield’s get by and allow Dido to dine with them when nobody else is around, and be, essentially, a playmate of sorts for Dido’s own cousin, Elizabeth Murray (Sarah Gadon), whose father left her with absolutely nothing but shambles. As Dido and Elizabeth grow older, they both realize that it’s time for a man in their lives, which also means getting hitched-off to somebody whom has more, or at least as much, money as you do. Since Dido’s father left her with a lot of cash-money to get cozy with, all sorts of men come knocking at her door-step. However, to Dido, it doesn’t matter how rich, how powerful, or how cool any of these men are, all she wants is somebody who is smart, nice, and respectful to her; which, from what it seems like, she has found. Except it’s not with somebody of a very high status, it’s a young, but ambitious lawyer by the name of John Davinier (Sam Reid), who seems to be working on a case with Dido’s uncle that may strike as some importance, especially to her.

Anytime a person thinks about racism, better yet, slavery, where is the place they most often connect that disgusting term to? The dirty, deep and dark South. However, what’s strange to find out is that not only was slavery happening all around us, but in different parts of the world as well. This may not seem like as much of a shocker to anybody with half-a-brain, but after all of the constant talking and loving of 12 Years a Slave, it’s kind of a nice change-of-pace to get a movie that not only deals with the same themes as that movie, but done so in a way that isn’t nearly as brutal, nor isn’t anywhere to be found in the South with Michael Fassbender yelling, preaching, dancing and raping all over the place.

Thank heavens for that, too. Because honestly, I think I can only handle watching something like that every so often.

Anyway, what makes Belle so unique, isn’t just the idea that it takes place in Britain and deals with an dark-skinned lady having to get used to the old school, preppy British ways these people were so accustomed to; it’s that the movie doesn’t try to preach its heart out about what it is trying to get across. Sure, there are plenty of moments where it seems like the script is just yelling at us, “Pay attention to how important and powerful I am!!!”, but other times, it felt like the movie was going for more of a character-study about who this Belle woman was, and why the position she was thrown into, sort of sucked. But by the same token, why she was lucky that she wasn’t worse off.

In fact, if there was any problem I had with this movie, it was that the tone and overall mood of this thing was a bit off. I get that costume dramas are supposed to be quiet and filled with emotional moments of people professing their love one another in the pouring rain, but there were too many times here where I felt like director Amma Asante wanted to go in one direction with this movie, but then, for some odd reason, decided to say, “Aw, fuck it!”, and changed everything up. It’s hard to explain for somebody who hasn’t seen this movie and doesn’t want it to be spoiled for them, but it goes a little something like this: For every quiet, subtle moment of either racism or class-warfare, there’s a loud, over-the-top scene in which somebody is saying something emotional, and totally meaning it.

In a way, it’s part-Jane Eyre (the 2011 version), and part-Pride and Prejudice (the Colin Firth-starring version). Easy comparisons I know, but they’re both costume-dramas that feel like they have one set mood/tone, and they absolutely stick with it. No changing up from scene-to-scene; just one, cohesive thread. However here, with Belle, it always felt like that thread was being pulled this way, then put back into place, and then pulled again. It never seemed to do its story as much justice as it should have.

Don’t get me wrong, there were some juicy bits to be found, especially whenever a character would get into a shouting argument with another character, in what I can only describe as “19th century rich people fighting”; however, they didn’t always last. The story itself may all be true, however, that still doesn’t keep it away from being a tad corny and made for somebody who can appreciate these types of Jane Austen period-pieces.

Notice how I said “somebody”, and not just “women”. Trying to keep it safe over here, people.

Anyway, the only aspect in which this flick really seemed to hit its stride, was with the ensemble cast of characters. For some odd reason, Matthew Goode gets his name high up there on the poster, despite practically being in the movie for less than five minutes. Guess he was just too charming and handsome to let go of for good. As for the two peeps playing his aunt and uncle, as predicted, Tom Wilkinson and Emily Watson are terrific and show us two sides to the way in which Belle needed to be brought-up. Watson’s character is more of a prickly, stern woman, whereas Wilkinson’s is a bit more about expressing one’s self, being who you are and not letting up for anyone, no matter what they say. In fact, Wilkinson saves this movie’s script a couple of times from sounding so hokey, that it could have been “laugh-out-loud hilurrious”. However, that’s just what you get when you sign Tom Wilkinson to a movie: He’s always going to assure you that you get the best that he can deliver on.

However, the stand-out of this cast is the one who plays our titled-character Belle herself, Gugu Mbatha-Raw. Yes, the name is a bit hard to pronounce (Goo-goo M-Bath-a-Ra), but once you can get past that fact, you’ll realize that there is a lot to this gal that’s just waiting to be revealed. If nobody remembers just who exactly Mbatha-Raw is, she’s that cool, hip chick from Larry Crowne. The movie itself wasn’t anything at all close to being special, but she made something about it seem so everytime she showed up, getting us away from the fact that she also happened to be playing the girlfriend of Wilmer Valderrama’s character for some odd reason.

But the past is the past, people! We, as a society, must get past that and take her for what she is, and what Gugu Mbatha-Raw is, is a great actress. She’s a name not too many people know about, but I feel like she may be able to get out there now and show the world what she’s got, because her performance as Dido is pretty stunning. She, just like Wilkinson and Watson, seems to come from the same school of “subtle acting” that really helps her character develop and morph as time goes on. At first, she’s a small, naive girl that doesn’t really know how she feels about anything in the world, including herself, but as time goes on, she starts to see the world for the wide, wonderful canvas that it has, with sometimes beautiful, and sometimes ugly things happening in it. Once she starts to see everything there is to see about this world around her, it’s not only done well, but makes us see Dido for what she is: A young woman who has been sheltered her whole life and is ready to take it on with all she’s got. She”s a bit of a cliche, but Mbatha-Raw helps her get past that and have us believe in her.

Hopefully this means bigger, better, and brighter things for our gal, Gugu. Maybe now is the time she should get the rare advice to, in fact, “stay away from Tom Hanks.” Just saying.

Consensus: Sometimes, Belle is thought-provoking, smart and subtle, whereas other times, it’s obvious, cloying and all too much like other costume-dramas of the same vein, however, the cast is always consistently great and make this totally worth watching, especially if you want to be the person who says that they “knew that Gugu chick before everybody else did”.