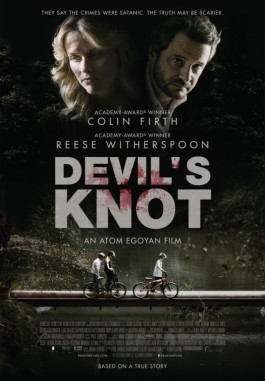 When you hear Metallica blasting through somebody’s speakers, run as far away from them as you can!

We’ve all heard this story before, but only through documentaries, so here it is again, I guess: Three boys in West Memphis went out for a little while and promised they’d be back by 4:30. 4:30 goes by, and less than a day later, they are found dead, naked, and tied-up at the bottom of a lake nearby their houses. Families, friends, neighbors, and people in general, are all upset about this travesty, but they know that justice needs to be done. This is when the police come up with enough evidence to arrest and hold a trial for three boys, all of whom were thought of as being the killers of these three little boys. Only reason? Because they looked, dressed, and talked differently, and had some ideas about Satanic-cults than most people like to feel comfortable with. Though mostly everybody believes that these are in fact the boys who committed this murder, one man, a private investigator (Colin Firth), doesn’t, and for some odd reason, decides to take this case on his own, pro-bono and all. What he finds out is not only are there some sheisty pieces of evidence left alone and barely even thought of, but that most of these stories just don’t add up.

As many of you may know, last Thursday, I reviewed the documentary about the West Memphis Three case, West of Memphis, and I found out two things: a) Arkansas cops can be really dumb, and b), that everything I read about that case beforehand was true and therefore, didn’t really needed to be forced down my throat once again. However, I chose to watch the documentary anyway, and realized that there were some things I didn’t quite know about and was definitely happy enough to see brought to light, especially after all of these years of barely hearing anything, except for the fact that *spoiler alert* the three boys convicted of these murders, weren’t actually even the murderers and finally let free.

That’s why it’s no surprise to see that an actual, narrative-film was made of this controversial case, and it’s not an even bigger surprise to see so much talent get behind it either. However, what is a surprise, is how bad it is.

And that’s not really anything against Atom Egoyan as a director, because you can tell that his intentions are well-driven and noble, to say the least. He isn’t really trying to bring up any new claims about this case that we haven’t heard before, and he surely isn’t trying to point the finger at anybody in an obvious way that may give us the impression that he a certain stance that he’d like to make known to the general-public. Nope, instead, he’s sort of just presenting this case, this story, and these people, exactly how it was, what happened, and whom they were.

The only problem is that none of it is at all interesting. Egoyan tries and tries again, but the problem is that there’s already been four documentaries made about this case, so what the hell is the point anyway? Sure, there’s one piece of evidence about a bloodied-man walking into a local Bojangles restaurant that I had never heard of before, but that seems to come, go, come back, go, and then all of a sudden, show up at the last second, as if it was the most meaningful piece-of-evidence of all.

I don’t know. Maybe I’ve been spoiled enough already with all of this ungodly amount of info I have stored-up in my brain about this case, so maybe that’s why this movie didn’t do much for me. But in all honesty, the movie as a whole, really doesn’t work. It isn’t that it’s boring because it doesn’t bring much to the table in terms of excitement for this case, but because it seems like the type of made-for-TV movie that you’d see Lifetime or Hallmark doing, except only with a few more dirty words and blood thrown into the mix. Oh, and the big-named cast as well, but really, they’re just here to collect a paycheck, I’d like to think.

Aside from all of that though, this movie doesn’t really do much at all. It’s less about the actual people involved with the case (like Echols, Misskelley, and Baldwin), and more about the case itself, making it seem more like a police-procedural than anything else. Which, yet again, would be fine and relatively interesting, had those documentaries never been made before in the first place; but they have, and therefore, it’s nothing new to see or hear when we find out that the cops are pulling whatever strings to ensure that these three boys go to jail. It’s less shocking here, and more like it’s just grand-pop telling us the same history-lesson, over and over again, without much variation in the details. I love my grand-pop and all, but seriously, the stories get old quick if you don’t do anything to spice them up. That’s just a fact of life, though.

Anyway, the movie does pay attention to some people involved with the case, mainly Reese Witherspoon as Pam Hobbs, a mother of one of the murdered boys. Witherspoon tries to settle into this gritty, Southern-bumpkin mama that loves her family, just as much as she loves justice being done, but aside from the extra poundage she clearly put on, nothing here that she does really feels genuine or even interesting. She just yells, cries, faints and uses a lot of shocked-expressions on her face, and that’s it. She tries and she tries again, but her character isn’t worthy of our attentions, as horrible as that may sound coming from me.

Another character that gets a hell of a lot of attention, for no other reason other than that he’s played by Colin Firth, is private investigator Ron Lax. Firth has a troubled-role in which he has to disguise his English accent to fit with his newly-acquired Southern one, and it doesn’t always work. Aside from that, his role is sort of bland – he’s just there to get all of the facts straight, and figure out what to do with this case, as well as his own personal life. Like Witherspoon, Firth tries, and he tries again, but sadly, the material given to him just doesn’t do much of anything for him at all.

And it gets even weirder, because believe it or not, this cast is actually jam-packed with recognizable and talented faces, it’s just that they don’t do much. Alessandro Nivola has the role as Terry Hobs, Pam’s husband, who in real-life, actually has the most controversial role in the case as a whole, but doesn’t have any of that hinted at all, except maybe towards the end with one shot. That’s it. Other than that, all he has to do is have his inevitable “freak-out” scene, comfort his wife, and that’s it. Lame, I know. Same goes for notable stars like Mireille Enos, Dane DeHaan, Elias Koteas, Kevin Durand, and worst of all, Amy Ryan. I think it should be a golden-rule by now that whenever you have Beadie Russell in anything, you must always use her to the best of her ability. No questions asked.

Consensus: Devil’s Knot tries to be more than just a regurgitation of everything we’ve heard and seen done before in countless documentaries, but the final result still ends up being a dud and not doing much of anything at all for the talents in front of, or behind the camera.