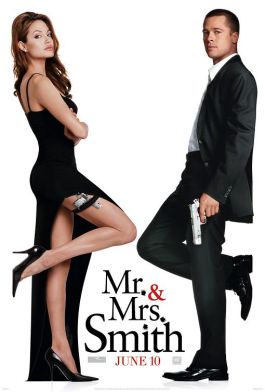 Sorry, Jen. But together, these two are really hot.

After having a chance meeting in a foreign country some odd years ago (five or six, neither ever knows), John (Brad Pitt) and Jane (Angelina Jolie) Smith live a comfortable life where either one talks to one another, yet, still live under the same roof and go to couples-counseling in hopes that things will get better between them two. However, when both find out that they are not only living separate, secret lives as super-duper spies, but that they are also part of feuding spy-agencies, then things got a whole lot more tense between the two; not to mention deadly. Oddly enough though, this newfound information ignites a spark between them both and for the first time in a long time, John and Jane both find themselves happily in love with one another, banging and eating all over the floor. Problem is, it may just be too late as the spy-agencies soon find out that these two are actually married in real-life and decide that it’s best to take them both out because it’s, “bad for business”. Whatever that means, right?

Herein lies the film that started it all; the famous, highly-attractive Hollywood couple that will be synonymous with Generation-Y’ers till the end of time; and definitely the duo that J-Aniston still wants to get back at all of these years later. Ladies and gentleman, here is the beginning of what we know to be known as Brangelina. Heck, it’s even got its own WikiPedia page! If that doesn’t just scream “culturally significant”, I can’t tell you what will!

With most movies that have more talk about what’s going on behind the scenes usually means that the final-product itself isn’t anything worth chatting about it either. It just serves as a platform for a conversation to get started on about; although today, one could just mention either Brad Pitt or Angelina Jolie respectively and end up finding themselves still talking about their togetherness, and less about the actual movie that brought them all together.

And as you can tell, I’m doing the same exact thing I’m going on about, because it’s sort of the truth: The movie that brought these two superstars together, really isn’t all that memorable.

“But surely something must have been well-done enough to where it would actually attract such picky A-listers as Brad Pitt and Angelina Jolie, Dan? So what is the problem?”, you might respond with, and honestly, my answer might be a general, “I don’t know”. Maybe these two were attracted to the idea of starring in a movie together, or better yet, maybe they just saw plenty of big bucks in the idea as is. It doesn’t really matter because either way, the movie is still very “meh”.

Most of that has to do with the premise itself which, on paper, seems very promising, fun and witty, and for the most part, is. However, the movie knows this a little too much and can’t help but remind us each and every chance it gets that, “Our premise is so goofy and our co-stars are so in love with one another, that we can’t help but be pleased!” These are the types of movies that linger on being “smug”, and there are more than a few occasions in which Mr. and Mrs. Smith finds itself creeping over to that side.

What keeps it away from doing so on most occasions? Well, it’s the main selling-point this movie had to roll with in the first place: It’s lovely co-stars.

And yes, it’s also said that usually actors who hook-up in real life, have terrible chemistry in the movies they’re starring in together, but here, with Jolie and Pitt, that isn’t necessarily the case. They’re good together and you can really tell that the two have a little twinkle in there eye whenever the other is in the same scene with them, however, they don’t get to show it off too many times. Because the premise is sort of a joke in and of itself about this married-couple hiding their real selves from the other and not really doing much of anything together as a unit, Pitt and Jolie aren’t really given too many opportunities to do a whole lot of on-screen flirting. More or less, they’re spending scenes together in awkward silence, which yes, is the point, but after awhile, does seem like a waste of some incredibly talented-individuals, who just so also happened to be shaken’ the high hoots behind closed doors at the time.

Yet, the moment in which these two come alive, is when they both find out that their secret spies, which yes again, is the point; they’re bored with their simple, carefree home lives and just want to live a little. In a way, Pitt and Jolie, at the time of filming this movie, were probably the same kind of people – Pitt wanted an escape from his faltering-marriage with America’s Sweetheart, whereas Jolie herself was looking to settle-down a bit and get serious with somebody who didn’t wear her blood across their neck, and/or wasn’t her brother. Maybe I’m looking way too deep into this than I should (actually no, I totally am), however, I can’t help myself. Not just because I’m obsessed with these two and their career’s in general, but because there’s not much else to talk about with this movie.

Personally, they’re the only reason to see this. Any reason why you’d laugh during this would be because both Pitt and Jolie are charming enough to make even the dumbest line/moment work. Everything else is sort of a mess. Like, for instance, the whole action-sequences themselves aren’t filmed right; Doug Liman is a fine director that clearly knew what he was doing with the Bourne Identity, but doesn’t seem to realize that action scenes work best when we care about everything that’s going on and is at least given to us in a fun, exciting way. Here, bullets fly; grenades explode; punches are thrown; and upper-class, suburban homes burst into flames. And yet, I didn’t give a single hoot about any of it.

Except for Jolie and Pitt themselves, who are clearly doing fine without hearing anything I have to say.

Love ya Brangie. Sort of made that up, sort of didn’t. Whatever.

Consensus: Most of the talk surrounding Mr. & Mrs. Smith has to do with what happened in real life between Brad Pitt and Angelina Jolie, and basically, are the only real reason this movie deserves to be seen – a time-capsule for what everybody was talking about in the mid-21st Century.