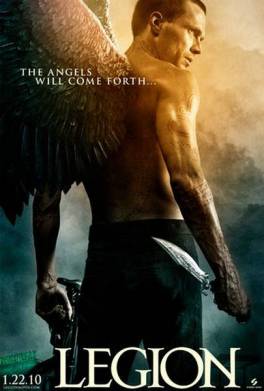 Angels vs. demons, with God and Satan somewhere hanging out in the back.

When an angel named Michael (Paul Bettany) takes it upon himself to rebel against God’s plan of wiping out the entire existence of the human race, the whole world gets thrown into a battle of good versus, and Michael is thrown right into the middle of it. Problem is, he gets thrown on Earth in the middle of the desert with a group of ragtags that literally have the worst luck in the world right now. There’s a diner’s owner (Dennis Quaid), his son (Lucas Black), the head-chef (Charles S. Dutton), a man who looks like Tyrese Gibson and just so happens to have a gun on him, as well as baby-momma issues (Tyrese Gibson), and an upper-class, stuck-up family just waiting for their car to be fixed so that they can get the hell out of this deserted hellhole and back on with their rich, extravagant lives (Kate Walsh, Jon Tenney and Willa Holland). However, the reason Michael has taken to Earth in order to save humanity from existence is because of the diner’s waitress, Charlie (Adrianne Palicki), who also just so happens to be pregnant; aka, the last hope this world has left. Now it’s up to these groups of ill-matched peeps, along with Michael guarding their sides, to take down whatever force God has prepared for us, the human race, to face off against.

And for one thing, it sure ain’t pretty.

Yes, that scene actually does occur in this movie, and yes, it is easily the best part of all.

But if you, like myself, watched that scene and absolutely laughed your ass off, then you’re in for a treat, because most of this film plays out exactly like that. It doesn’t matter if the special-effects look cheesy, the dialogue is clunky, the characters are incredibly under-developed, or even that the whole idea of God creating these dangerous, powerful monsters to destroy the rest of the human population, only to have each and every one of them easily kill-able by a couple of bullets or a nice smack in the head, is a bit ludicrous. Nope, it doesn’t matter how terrible this movie can get, because for one thing, it’s pretty fun.

Yes, I know that not everybody in the whole wide world can just lay down their swords of disdain and hate for anything that’s not considered “a work of art”, but trust me, if you like old, cheesy, 80’s flicks like Maximum Overdrive or even the Terminator, then this is an absolute blast from the past, that just so happens to be a movie made in the new millennium. But still, you get my drift: Expect this movie to be utter garbage and somehow, you will have fun.

Now, that’s not to say that this movie is totally amazing and perfect because it’s so dumb and over-the-top and knows it, because there are more than a few problems that this movie ran into and brought it all down as a matter of fact.

What takes this movie away from being very fun is that, like any other movie ever made in the existence of man, there does need to be some cooling-down time so that we can get to know our characters, their plight, what keeps them living on and on, and why it is that we should keep on rooting for them. I get that this needed to happen, but whenever you have quality-actors like Charles S. Dutton, or Paul Bettany, or even Dennis Quaid delivering lines like, “Show me your teeth!”, you just know that you’re in for a good, old fashioned, goofy-as-hell treat. That’s why when things slow up and get a bit serious, things are boring and they only get worse as time goes on.

But then, just as I would start to get annoyed with how serious and melodramatic this movie wanted to get for me, it pulls something completely out of its ass like a walking, talking, and sinister demon-child, and just had me rolling around in my seat. Sure, you could look at this as something as “total and complete crap”, but that’s sort of the point. There’s some messages to be brought about following God’s plan and how it’s up to us to interpret for ourselves what it is exactly that God wants us to do, or not to do, that totally gets lost in the shuffle of blood, action, and F-bombs; and with good reason, because all that stuff was really bringing down the vibes, man.

All this movie needed to do was give me some actors like Tyrese Gibson, Lucas Black, and even Kate Walsh enough moments where they got to be crazy and/or shoot something, and then I was good. And thankfully, I got to be of witness to that, more than times than one human being probably should be exposed to. However, I enjoyed it and I think that if you’re going to get a random ensemble such as this together, you need to allow them to do as much as possible, with at least something of a script. It doesn’t matter if the script is awful and even makes some of the actor’s doing the line-readings a little embarrassed – all that matters is that they seem like they’re having a fun time, even if the movie they’re in is as deadly serious as you can get.

That’s why when you have a talent like Dennis Quaid who is able to be gruff, mean, and a bit silly at the same time, it’s a joy to watch because you know that he’s in on the joke, even if the movie doesn’t like to show it off too often. As for somebody like Bettany, well, I feel bad for him because while this is a rare leading-role for the guy, he’s way too stiff and just seems like he showed up late to a party that everybody was already high and drunk at. Maybe that’s exactly how it was on set, so if that is the case, then Bettany deserves an Oscar. But for his work here, I feel bad that somebody as talented and as reliable as him still has yet to be given that leading role that puts him on the same marquee as many other supporting players who went big time.

Yet, he will always be remember for his bum. Poor Paul Bettany, man. Poor him.

Consensus: Can Legion be placed in the “so-bad-it’s-good” category? Most definitely so, and if you don’t think it, then lighten up, grab a drink or two, and give this one more watch and see how many times you laugh at somebody like Dennis Quaid guzzling down a Busch Light.