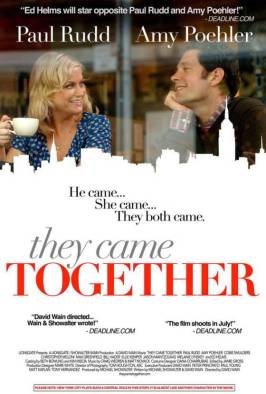 So if I don’t profess my love to a girl in the pouring rain, she won’t fall in love with me? Damn rom-coms!

Joel (Paul Rudd) and Molly (Amy Poehler) are practically perfect for one another. They’re both two kind, gentle and easy-going people who just got out of relationships and need somewhere to start fresh and anew. That’s why it’s so weird that when they finally meet up, there’s so much distaste between them both. It’s strange really, and nobody knows how or why it is the way it is, but that’s just the fact. However, late one night, when Joel has some time to think to himself and even talk to his “baby brother” (Max Greenfield), he realizes that it’s time to nut up, or shut up. So, he asks Molly out on a date and they both realize they’re perfect for one another in every which way. They compliment each other; they have wonderful sex; and Joel is even something of a father-figure to Molly’s son. However, there is problem in that Joel works at a Candy Research Factory that preys on knocking out all of the smaller, mom-and-pop chain candy stores; one in particular they are looking at is one owned by Molly herself and it just may possibly ruin their relationship forever.

If you just read that synopsis up above and felt like everything I just said was quite familiar, that’s because, it is! Or, better yet, it’s supposed to be!

See, They Came Together, is exactly like every romantic-comedy ever made; it has all of the troupes, the formula, and heck, even has the same characters that you’d find in any rom-com, had you just been scrolling through the channels or on your Netflix queue. And as a whole, the rom-com genre sort of deserves this much of a thrashing; it’s a genre that hardly ever seems to learn from its mistakes, and instead, just continues to force-feed us the same bullshit stories and resolutions that happen in only said types of movies. Not at all in real life, and anybody who believes otherwise, don’t deserve to be reasoned with.

Anyway, that’s why watching something as obvious and goofy as They Came Together is something refreshing, regardless of how much it actually does, or doesn’t work. Sure, it’s definitely funny in spots, but there’s something to a movie that understands it’s a joke and doesn’t really try to make itself anything else. Some may complain that this movie doesn’t have much substance, nor even a real, actual story-line to follow along and get involved with, but I don’t think it needs one to be considered a fine movie. If you just want spend a near-hour-and-a-half watching as somebody riffs on the rom-com genre, then this is more than fine for you.

Better yet, if you’re already a fan of the type of humor David Wain brings to any project of his, then it’s even more of a treat for you. Because, for one, he doesn’t hold back on really letting this movie expose the same old and tired troupes we’ve all seen practically done to death. Maybe he’s a bit too obvious about what it is that he’s trying to say or get across, but I didn’t mind that because most of the time, he had me howling like a wildebeest that couldn’t get a firm grip on his own self-control.

That said, if you’ve seen any David Wain production ever, you’ll know that, for one thing, he doesn’t really take himself away from getting really weird. And here, there are many occasions where Wain lets his weirdness really take over and even confuse the hell out of the viewer who may be watching it.

For instance, there’s a scene in which somebody is sad and lonely, sitting at the bar after they’ve just had a pretty shitty night (after a bad date, presumably), and, as expected, the bartender asks the person who’s drinking, “Bad night”, in which the character drinking responds, “Tell me about it”. And I swear to you, for the next five-to-seven minutes, this whole scene is played-on repeat, almost giving you the impression that something is wrong with the actual movie you’re watching. Sounds a whole lot like the kind of stunt that Andy Kaufman would pull, and for some odd reason, it works here. It’s just that strange and random, that it actually works.

Need another example of weirdness taking over Wain’s flick? Well, try the idea of incest between a grandmother and her grandson, that, surprisingly, gets even weirder than you could originally imagine.

So yeah, if that tells you something about this movie, it’s that it’s constantly up to no good, making fun of rom-coms, and even itself at points. And although it is a relatively short movie, I did find it running a bit out of steam by the end. Then again though, that’s the case with most parody-movies; there’s only so much surprises they can throw at us for the first two-halves that once things have to settle down, get resolved and eventually end, you can feel it and in a way, you sort of want it as well. That’s not to say the last-half of this movie isn’t funny, it just feels long-winded, even if, like I said before, it’s only an-hour-and-20-minutes (which is like three episodes of Breaking Bad, kind of, sort of, maybe).

And of course no parody movie would work if its cast weren’t up to the task of absolutely just letting loose and looking like total goobers and I think Wain’s assembled a great one here. It’s nice to see Paul Rudd and Amy Poehler work together again (especially after something as classic as this), because their chemistry together is pretty great. Although it’s a bit hard to tell because you can never take them seriously for a single second, it helps that they at least feel comfortable enough with one another to just be all sorts of crazy and weird, just exactly like they know how to. Now, that’s not to say that I kind of wished this was a straight-forward rom-com, both starring Poehler and Rudd in the lead roles, with Wain writing and directing, but for something as funny as this, I guess I’ll just shut up and take what I can get.

Consensus: Those who want a somewhat serious, standard rom-com will be utterly shocked and displeased to find out that They Came Together is neither, and instead, a crazy, funny, wacky, and sometimes incredibly weird, parody that doesn’t always work, but at least tells enough truth in what it’s making fun of.