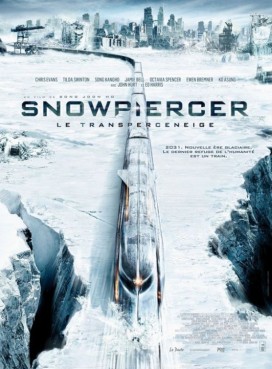 Public transportation really is a pain.

In 2014, the government is afraid that global warming will rip our worlds to shreds, so they decide to test out an experiment which will supposedly counteract it. The problem is, that doesn’t happen. Instead, nearly all life on Earth is knocked out, with only a few hundred or so left riding on this super duper, seemingly never-ending train called “the Snowpiercer”. It doesn’t seem ideal at first, but when the world outside of you is a frozen wonderland, you take what you can get; but don’t tell that to those who have to stay, live and survive at the tail-end of the train. They’re considered “the low-life’s of society” that live poor, dress poor, and eat these black gelatin-bricks, they’re are told is “protein”; whereas the rich sit up front, eat their steaks and live in total luxury. It’s been like this for quite some time, but finally, the poor have had enough of being treated like total and utter crap! That’s when Curtis Everett (Chris Evans) decides that it’s his time to step up, take charge and map-out a way to get to the front of the train, find the creator, find that engine, and basically, take over the train as a whole. Sounds simple enough, but with the riot-team this train has, getting there is only half of the mission.

It’s taken quite some time for us Americans to get to see this movie, but finally, Bong Joon-ho’s English-language debut is here! And yes, even though I just recently got into him, I have to say, from what I’ve seen so far, I’ve been impressed. I like how Joon-ho is seemingly able to take all of these different genres of film, throw them into a blender, add a drop of sugar or two, and somehow, still be able to have it all come out fun, exciting, interesting, original, and best of all, cohesive.

That’s why, as ambitious as this project sounds, I was a little weary. Not because the reviews for it haven’t been good (actually, quite the opposite), but because it seemed like the type of film that gets so hyped-up in the States, because it’s so different/original from anything our lazy, cheeseburger-lovin’ asses see. It doesn’t matter if the film is bad or anything, as long as it features something else other than giant robots facing off against one another, then hey, strap me in coach, I’m ready to play. Personally, I don’t mind that with some movies, but maybe with this here flick, I was more inclined to be against it, solely because everybody and their weird, stay-inside-all-day-nerdy-brothers are loving the hell out of it.

But fear not, ladies and germs! DTMMR has seen Snowpiercer and yet again, DTMMR has given into what the rest of the world has been saying: It’s pretty rad.

That said, the movie isn’t perfect and I think that’s the most important fact to note right away. Because see, while this movie is all sorts of ambitious, strange and, for lack of a better word, “different”, it can be a bit messy. Not just with the action that spills out all over the place at times, but because the balance Joon-ho has here between having people beat the bloody hell out of one another, with said people sitting down, chatting about life and what it all means, isn’t very well-done. You can tell whenever the brakes on this movie are hit, because it doesn’t just slow everything down to a slower-speed, it slows absolutely everything down to a freakin’ halt.

That’s not to say that whenever the movie wanted to sit down, chat for awhile and be more than just “poor vs. rich; fuck yeah!”, it was bad or annoying, it was just clearly obvious that Joon-ho felt like he had to include those moments in there, just so that people wouldn’t be upset that there wasn’t any “substance” behind all of the brutal murders and acts of violence. And although those said brutal murders and acts of violence are a bunch of juicy-fun to watch and see play out, there was still a desperate need for this movie to be about something “more”. Not just in the existential-crisis kind of way where we all take a break or two from the action, to sit around and cry for hours on end about how, one day, we’re all going to die; but in the way that we’re given a story that feels like there’s a reason to it existing.

And for the most part, Joon-ho totally delivers on that point. Not because it’s fun to see a bunch of poor people dressed like chimney-sweepers from a Dickens novel, battle it out with a bunch of riot police, but because you get lost in their cause and what it is that they want. Although, I will admit, it was more interesting seeing as how this movie never quite addresses what it is that these poor ones are wholly fighting for; sure, they want to get to the front of the train, get to that engine, talk to the owner of it and become the big men and women on campus, but in all honesty, what exactly is it that they’re going to do when they get up there? It’s never really brought to our attentions (not just by the film, but by the characters themselves), which is why it’s so thrilling to see them battle their way to the front, and even more thrilling to watch them as they figure out and come to the realization that they have to think of something, and something quick if they want this train to be theirs.

That the film doesn’t feel the need to hit us over the head with non-stop “we’re the 1%” metaphors, really felt like a refresher. But was even more refreshing was just seeing an sci-fi/action blockbuster be exactly all that it should be. It has heart; it has originality; it has blood; it has violence; it has fun; it has sci-fi; it has themes about people taking over control of a situation that they either can’t get out of, or don’t want in the first place that almost everyone can relate to (looking at you, Grandpa); and, to add a cherry on top, there’s a wonderful ensemble cast to go along the ride with as well.

Also, another interesting note to be made about this movie, is it’s cast. Not only are there some pretty big names, but they all comes from different shapes, sizes and regions of the world that it feels so strange having them together, on the same screen at times. Sure, I expected Jamie Bell and John Hurt to eventually cross paths in the film world, but you could have never told me that you’d expect to see Ewen Bremner and Octavia Spencer just hanging out, side-by-side, giving their enemies hell. Then again, maybe you could; maybe, I’m just a strange duckling. But either way, it’s a pretty unique cast that not only works to the movie’s advantage, but also helps make the idea of the whole world being thrown onto this ultra-train all the more believable.

You can’t just have a dystopian-set futuristic world in which survivors from all throughout the globe have survived, and there be all American white guys just hanging around and shooting the shit about the good old days of bull-shitting about the Bush administration. This is the world, man! And last time I checked: It’s pretty damn big!

But although the cast is huge and pretty eclectic, the one who really leads this to the finish line is none other than an American white guy as is: Chris Evans.

Yes, for most of you hormone-fueled women (as well as gay man), Chris Evans has definitely been the pleasure of your eye-lids for quite some time, but he’s changing that all up now with this role. Not by throwing some dirt on himself and growing a beard, but by showing us that he’s an actor baby, and that he can sure as hell do exactly that, which is act! I’ve always had much faith in Evans as an actor, and here, he’s given free reign to not only command this group of his and be a leader, but also command this movie into being something more than just a sci-fi tale full of havoc, blood and destruction. He gives it some levity; most importantly so during one of the last scenes in the movie in which he talks about his history on that train, why he needs to do what he needs to do, and the type of effect it’s had on him for the past twenty or so years. Not only is it one of the most emotional scenes of the whole movie (of which there isn’t many), but it’s definitely the pinnacle of Evan’s acting-ability and shows that he can play both tough, angry, and emotionally distraught, all at the same time.

Consensus: Internally, Snowpiercer is a messy flick, but it’s hardly ever boring, intriguing, nor against a crazy, out-of-the-box idea it didn’t like, making it one of the better, more memorable blockbusters of the summer.