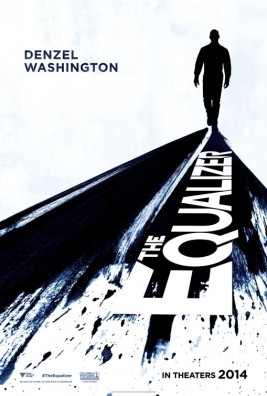 By now, everybody should know not to mess with Denzel. Like, come on!

Robert McCall (Denzel Washington) is a quiet man who lives a simple, yet mysterious life. Nobody knows quite exactly what he’s done in the past, but know him now, in the present day, as a man who works at the Home Depot, lives alone, reads a lot, and goes to his local diner whenever he can’t sleep. That’s all really, but when Robert meets a very young hooker by the name of Teri (Chloë Grace Moretz), there are certain shades of his past that begin to show. For instance, when Robert sees that Teri’s employers have been beating up on her pretty bad, he decides to take matters into his own hands to ensure that something bad won’t ever happen to her again. He gets a chance to do so, but as a result, ends up pissing off most of the Russian-mafia that is now looking for this mysterious man and won’t stop until they do so. Little do they know of who they’re messing with. Then again, neither do we!

We’ve all seen this kind of movie before. Hell, we even seen it with Denzel in the lead role! Which can only mean one thing: Hollywood is surely running out of ideas. Surely this can’t be much of a surprise to anyone out there who has been paying attention to the movie-business for quite some time and are able to realize that fresh, original and innovative ideas in mainstream movies are quite hard to come by.

But that said, there is something to be said for a movie that can take a traditional story we’ve seen (especially an original one that was made for a TV show), and give it something of a “boost”, if you want to say that. See, while I’m not too sold on Antoine Fuqua’s total abilities as a director I can trust with my life, I can say that he can make some very entertaining movies, even if they aren’t for people with an IQ level higher than 48. And that’s pretty much what the Equalizer is – a fun, slightly silly movie that doesn’t always set out to be more than just the typical revenge-tale we see a middle-aged star like Denzel Washington take.

Although, that’s where this movie actually surprised me a bit more than I expected it to, because while there’s plenty of action, blood, guts, revenge, crime, explosions, and murder, there’s also some drama that Fuqua is able to throw in here.

Take for instance, the first-half of this movie that actually sees Fuqua playing around with the idea of being a subtle director. Rather than focusing on the action and violence that is soon to come of this story and its characters, Fuqua takes his near and dear time to build this lead character, the way he lives and just exactly how he gets by in life. Sure, there’s a total essence of mystery surrounding this character, and it should probably come as no surprise to anyone that what we do end up finding out about him, is quite scary, but we, the audience at least, are thrown into this guy’s life and it’s one that’s easy to get compelled by.

But even when the action does get thrown in there (as expected), it’s still effective. While it may be a bit gratuitous at times, it’s still neat to see the violence coming from the view-point of a character we are interested by, and also exactly how he punches, or kicks, or stabs a person, and in what particular order. Also, to add another layer to this character, we get certain hints that he’s OCD in certain ways and it’s cool angle on a story/character that could have easily been, “He likes to beat the shit out/kill baddies.”

That could have been the whole story in a nutshell. And although some may argue and say that’s all there is to this story, it felt like there was a bit more meat to the tale than just that and I was definitely happy for it. Not just because it was another crime-tale that was a tiny bit more than just all about showing violence to bad people, but because it showed me Antoine Fuqua is actually capable of bringing some tender drama to a scene. Not going to say he’s a “subtle” director, because we all know that he isn’t, but he proved himself this time and I for one, was quite pleased with that.

I was even pleased with Denzel Washington in this lead role, because while he too isn’t really doing anything different from what we’ve seen before, he technically doesn’t need to; he’s just Denzel, being Denzel. Meaning that he gets a chance to be charming-as-all-hell, kind to others, menacing when he wants, and even a chance to lay down on some mofo’s who seem to be asking for it the whole movie. If that’s what you want from Denzel in your movies, then this is all fine and dandy for you. I like to see Denzel in these types of movies, and although a part of me wishes there was just a tad more for him to do here, I’ll take a solid performance from Denzel, in a solid movie any day, much rather than a shitty performance, in an even crappier movie.

But even when the film does get pretty wild and insane, as we usually expect from Fuqua’s movies, it’s mostly by the end and by then, we’re already sort of realizing that this story has taken a turn for the worse. Not to say that it gets bad, per se, but more of that it’s just goofy and almost like a Home Alone finale that will surely be a crowd-pleaser to most that are expecting Denzel to whoop some bad guy-butt, but is also rather disappointing to those who thought that there’d be a bit more than just that. And by “those”, I mean just mostly me.

But what can I say?!? I’m just a guy who appreciates a movie that’s more than just what it presents on the surface!

Consensus: Though it gets silly by the end, what the Equalizer does well is build a suspenseful story, around a compelling character, while also allowing Denzel Washington to just put in some fine work.