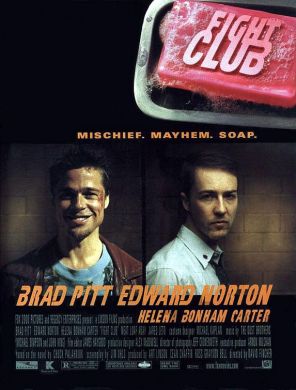 Next time you want to buy those hip, new jeans from JC Penney, punch yourself.

In a country as wide as America, it’s hard not to get swept up in all of it. An normal guy who sometimes go by the names of either “Cornelius”, or “Jack” (Edward Norton) knows this, but he can’t help but still fall for the tricks that mainstream society has set up for him to get caught in. Because of this, he becomes an insomniac that binges all day and night on crappy sitcoms, expensive furniture and belongings, and occasionally goes to a job where he has to file reports on faulty cars’ systems. However, he eventually finds a cure for his insomnia in random support groups that occur all around him. Though he can’t really connect with any of the other members in these support-groups, he still finds some solace in the fact that he can go to these private places and just let all of his emotions out. That all changes, though, when a fellow “phony” named Marla Singer (Helena Bonham Carter) starts showing up to the same meetings and ruining our protagonists’ peaceful vibes. This is when the insomnia continues, but this time, he finds another form of escape – however, this time, it’s not with a group, but instead, with a person.

The person’s name, Tyler Durden (Brad Pitt); the person’s occupation, making and selling soap; and lastly, the person’s beliefs, well, that we should all just start letting our oppressed anger out and start taking it out on our follow man.

This is a hard movie to talk about, but not for the reasons that some of you may think. See, with a film as culturally significant and iconic as Fight Club, it’s hard to write a review/post, fifteen years later after the movie has been released and consumed, and bring up certain points that haven’t already been stated.

Well, technically, I could. Like for instance, I could talk about how incredibly sleek, grimy, and gritty David Fincher makes this movie look; or how the twist is a total shocker to any first-time viewer, yet, totally works when you see it countless other times; or even how mostly all of what Chuck Palahniuk was trying to get across about the state of our nation’s culture, our society, and the way in how our citizens were constantly being shaped into becoming what the rest of the world wanted them to be. Of course I could talk about all of this and while I’ll definitely dive into some of that here, simply restating these points would be lazy.

However, I’m going to probably do them anyway. Sorry, people. I’ll try and stay away as far and as long as I can, but such is the dilemma with Fight Club: There’s clearly a lot to discuss and argue about, but so much has already been said. Then again, on the flip side, the beauty behind Fight Club is that so many people can think about it differently. Because even though Fincher himself has sort of thrown little hints here and there about what the real meaning surrounding Fight Club is, he’s sort of left it all up to us, the viewer, and it’s not only a smart move on his part, but for us to actually follow through with it, as well.

I honestly can’t tell you how many times I’ve had a simple, relatively peaceful conversation about this movie and its meaning, that’s all of a sudden turned to something resembling a brawl. I’m totally exaggerating (maybe), but this is probably what Fincher and Palahniuk intended in the first place: They wanted their material to be dissected, interpreted, and talked about for days on end. Does it deserve to be? Absolutely, but there is something to be said for a movie that continues to still keep on popping up in pop-culture, and just real life in general.

Does that mean this movie is overrated? Not at all. But is it perfect? No, it is not. Fincher has definitely made some better movies in his storied-career and while this movie definitely comes close to being one of them, it just isn’t. However, that’s not really a complaint, as much as it’s just a statement from yours truly; Fight Club, for what it is, is a movie that deserves to be seen. If not a few times, just once then, because while it’s a movie that asks you to think outside of imaginary box you don’t know you have around your life, it’s also the rare studio-movie that poses some morally and ethnically questionable ideas about how a society is ran, and how those members in society feel when they aren’t allowed to express themselves for so very long.

For instance, take our unnamed protagonist, he’s your typical everyman – boring, easily influenced by conformity, and never true to himself or the beliefs he has lying underneath that clean shirt and tie. However, once he realizes that there’s more to the way the world can be ran, his especially, he can’t help but join in this free frenzy of anger, violence, and hate that stems from the inner-most core of man: The right to express themselves freely. And even though you could argue that he only does this because he’s so taken away with Tyler Durden and the way he carries himself through everyday, bizarre-o life, you could also look at the fact that this rage has been brewing inside of him for quite some time. It’s just until now that he finally gets a chance to let it all out, with a numerous amount of fellow men who feel the same as he does.

And since I already mentioned his name, I guess it’s right to mention the character of Tyler Durden himself: A wacky, wild and sometimes, border-line insane caricature of what every guy, no matter how hard they try to deny it, want to be. And honestly, what better actor to play this ideal-perception of a man, according to fellow men, than Brad Pitt himself. Not only is this pure casting-magic at its finest, but it’s also one of the sheer signs of genius that Pitt was beginning to show us; not just as an actor, but as a star who had the right to choose whatever project he wanted, without having to worry about how the rest of the world viewed him. Because yes, even though Pitt still gets to look hunky and jacked-out as humanly possible here, he’s still something of a grotesque character that you’re never too sure of. You know that he’s someone you can’t pin-point down if you saw him in a crowded room and met him for the first time, but then again, he’s the first guy you’d notice in that same crowded room.

This is to say that Pitt is wonderful in this role and absolutely crackles and pops with every second he gets to play as Tyler Durden. But that isn’t to say that Edward Norton doesn’t get to do anything effective here either as our main protagonist, because he totally does. It’s just less of a showier-role, which is totally saying something because Norton gets a chance to do everything we love seeing him do in just about any movie he decides to do: Get your attention right away, sometimes be funny, and make you wonder just what his character is going to do next.

The same could be said about the movie as well, because while Fight Club can’t necessarily be classified as something of a “thriller”, it’s still the kind of movie that will have you on edge. Not just with where it’s story goes, or the plot-mechanics of how, but why. Fincher does, much like what the novel also was capable of doing, bring up viewpoints on various forms of everyday society: Music, movies, television, fashion, commercials, etc. And while you could definitely say this a movie with an agenda, good luck trying to figure out what that agenda is.

Personally, I think it’s all about how we as a society are inherently already built to conform and give into mass-media. Or better yet, that fitting in and following along with the rest of the current is the right, relatively safe thing to do. Though I know this movie is speaking this mostly through/from the male viewpoint, I think this is a point that could be made for all members of society; stop doing what everybody else is doing, or what others say you should do. Stand up, scream, shout and do whatever you can to make yourself happy and express yourself. Although that doesn’t necessarily mean you should go around, starting clubs where people beat the shit out Jared Leto, that doesn’t mean you should sit back, watch from the back-row, and sheep around with the rest of the flock.

Or, you know, at least that’s what I think it’s about.

Consensus: Audacious, bold, original, thought-provoking, and somewhat of a crowd-pleaser, Fight Club is the perfect blend of art and commerce, while also serving as a metaphor for the world in which we live in, and the chaos that’s always linger from within it.