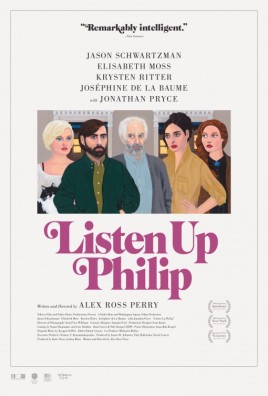 New York writers seem so much more hot-headed than Philly ones. Thanks heavens.

After his first novel got published, hit the shelves, and was read by millions upon millions of people, Philip (Jason Schwartzman) seemed to on top of his own little world; a world in which he was the greatest, most smartest person alive. However, years later, he’s struggling. Not just to get his second novel out there and avoid “the sophomore slump”, but with his personal life. See, Philip lives with his girlfriend of two years, Ashley (Elisabeth Moss), who is supportive of his career and what he wants to do, although she can tell that he’s slipping away further and further into his own pretentious mind. This is when he meets the aging, once-hot writer by the name of Ike (Jonathan Pryce), and the two strike up something of a friendship; a friendship which the two don’t really expect to go as far as it does, but ultimately, self-serving in the way they treat their own respective egos. That proves to not just be a problem for Ashley, but also Ike’s daughter, Melanie (Krysten Ritter), who wants nearly as much, if not more, adoration from her father than Philip does.

Honestly, movies about the rich, slightly famous, and ever-pretentious lives of novelists’, just aren’t for me. Usually, it takes me about two minutes before I already want to break my TV, get on Twitter, and talk about how I hate people like the ones I just watched, and always promise to never turn into one day. It’s a promise I not only hope to keep to those around me, but myself as well.

But that’s exactly why Listen Up Philip works; though it portrays the lives of these artsy farsty, New York individuals exactly as you’d expect them to be, the movie also takes the piss out of those conventions as well.

For instance, take the main character of this film, Philip. See, while he’s insufferable, mean, cruel, and nasty to just about everyone he ever meets, the movie never really tries to make it abundantly clear that there lies a decent human being underneath. Sure, he may have the ability to love and make people happy, but mostly, it comes at his own expense and it only furthers the idea that Philip, though our main protagonist, as well as the one we’re supposed to be paying the most attention to, just isn’t a nice person and shouldn’t be viewed as such. Therefore, he also can’t really change, either. We’d like to think he can, but honestly, there’s only so far one can go until they are just viewed as annoying a-holes and they stay as such.

That said, the movie doesn’t apologize for Philip’s, or anybody else’s actions, either. In fact, I’d go so far as to say that the real strength behind Listen Up Philip is that writer/director Alex Ross Perry doesn’t hold any punches back when it comes to showing us its characters, and allowing us to see them for all that they are. Like I said before in the case of Philip – while he may be a total pain in the ass, there’s still something inherently believable about him that it’s easy to find one’s self actually meeting this same kind of person on the streets of Manhattan. You’d probably regret meeting him in the first place, but the fact that you met someone like him, with the way he dresses, acts, or carries himself in casual conversations, makes the experience all the more raw and understandable.

Most of that has to do with the fact that Jason Schwartzman’s performance as Philip is very good, but it’s also because the writing is well-done, too. But it’s not just Philip who gets most of the love here, as most of this movie is a group-effort on every side of the spectrum. For instance, a bold move Perry decides to take is rather than just keeping his focus solely on Philip and Philip alone, we actually get to take some little adventures into these individual character’s lives. We not only get to see how their lives are possibly affected by Philip, but just exactly what they do to get by in this little existence that they call their lives.

Now, of course this means that some of these viewpoints are more interesting than others, but altogether, taken as a whole, they still do well for a film that could have easily fell on its affected face.

Probably the best subplot of the few we get, and possibly the best part of this movie, is Elizabeth Moss’ Ashley. If any of you’ve ever seen Moss as Peggy Olson, you’d know one thing is for sure: The girl can act. And while Moss isn’t doing anything quite different here as Ashley, except for the fact that she’s playing a character in modern-day America, she still knocks it out of the park as a gal who genuinely loves her boyfriend, but just doesn’t know how to handle her emotions well enough for him, so that when he does decide to get up and leave, she doesn’t get as destroyed as she expects to. There’s about 20 minutes of this movie solely dedicated to Moss and it’s compelling to watch. Not only did it make me wish we got more of her character and her side of the story, but maybe that we could have gotten a whole movie dedicated to her in general.

But while Moss’ Ashley is definitely the highlight of this movie, the downside is that the other two subplots in this movie don’t really hold up as well. For example, while Jonathan Pryce’s Ike character may be interesting on paper, doesn’t really bring much to the movie as a whole and only brings the energy away from a story that could literally go anywhere, at any given moment. Even worse is that while we do get plenty of scenes with her, Krysten Ritter’s Melanie is hardly featured nearly as much as everybody else and it’s a bit of a shame. Not just because Ritter’s a good actress (which she is), but because you can tell that maybe the movie would have been able to draw something interesting out of her character, but just didn’t give her the right time of day to do so.

In a way, when judging how it treats Ritter’s character, you could think of Listen Up Philip as Walter White. But that’s enough AMC original series’ references for now.

Consensus: Though it doesn’t always hit its mark, Listen Up Philip is still a funny, fresh, and sometimes realistic look inside the lives of a couple characters nobody would ever expect to like spending time with, yet, are somehow able to, when given the right amount of detail and development.