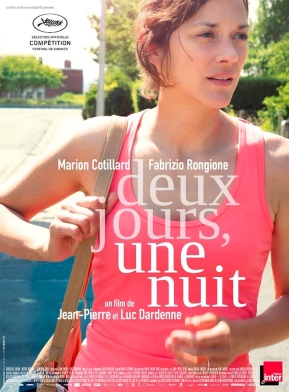 Early one Friday morning, while lying motionless in her bed and not wanting to pick up the phone, Sandra (Marion Cotillard) gets word from her husband (Fabrizio Rongione) that her job may be possibly on the line. According to her most trusted co-worker, a total of sixteen had apparently all taken a vote to receive a pay-grade, so long so as they got rid of Sandra to begin with. Whatever the reasons behind Sandra’s firing may have been, is totally unknown, but all Sandra knows now is that she has to go to each and everyone of these co-worker’s and see if she can get them to change their mind about their initial decision. Or, if anything, at least see the situation from her point-of-view. However, mostly due to the fact that Sandra may already be battling some sort of problem with depression, the weekend turns into a small adventure of sorts, where she talks to people she may not have talked to before and, for better and for worse, gets a chance to see what it is that they have to say about her, her work-performance, or why exactly it is that they want this pay-increase to begin with.

On the surface, Two Days, One Night seems so incredibly simple that you could practically write a short story about it. However, the way in which co-writers/directors Jean-Pierre and Luc Dardenne allow for this story to play-out, it’s anything but. Meaning that while we do get a relatively straight-forward glimpse into the life of one woman’s struggle to keep her job, as well as her sanity, there are certain under-lining themes and ideas that make this story than just what’s presented to us as is. What one person may see as a clear statement on the cut-throat business-world that’s been created for our society and those who decide to get involved with it, no matter what social-class they’re apart of – another may see as a story about a woman just trying to keep her job.

I guess, what it all really comes down to is whether you’re the viewer who likes to think long and hard about what you’re watching? Or, whether you’re the viewer who likes to sit down, watch what’s in front of you, enjoy it for all that it’s worth, have it end, and simply go on with your day, as if nothing had been seen or digested in the brain? I’m not saying one viewer is better than the other, but it’s just the certain idea that went through my head while watching this.

Because, yes, while I’d like to assume I am the kind of viewer in the formerly-mentioned party, a part of me was thinking that there’s a certain bit of this movie that is all too simple to really be about anything else except just what’s presented to me. Sure, the idea that this one woman could lose her job, because of excessive greed and possible manipulation from the higher-ups is brought to the table and, in some instances, even confronted as evil, but reasonable. These are short, slight moments that made me feel as if I was watching something made for my thinking, living-self.

Then, there were a few instances in which I felt like this movie was just taking a simple premise, and keeping it as that. Normally, I don’t have a problem when a film maker settles on the option of making their own movie a piece of free-thinking, non-heavy entertainment, but in this case, I didn’t want that. I wanted more meat, skin and bones to my story, rather than just this French gal walking around town, going door-to-door and seemingly having the same conversation with people she kinda/sorta/maybe knows. You could make the argument that each and everyone of those conversations that the French gal has at least brings out something new/interesting to these supporting characters and put the final decision into a wider-perspective, but at the end of the day, that’s all it feels like.

Once again, that’s not a slight against the Dardenne Brothers for giving me something simple and at least sticking with that, because, for the most part, it’s good what they already have to be shown. The narrative is strong enough to make this woman’s interactions very compelling, and heck, even she’s a very solid character. Although, yes, it’s very hard to pin-point what it is exactly that’s going on so wrong in the head of her, there’s an idea that while Sandra may be a bit of a basket case, she is still, like you or I, a human being who is deserving of a job, and all of the perks that come along with it. Because we’re able to identify with Sandra, her interactions with those around her make a lot more sense when put into perspective as to why the hell she’s fighting for her job in the first place, and why it may matter more to those around her who love and depend on her the most.

It also helps, too, that Sandra is played quite well and effectively by Marion Cotillard, an actress who, I feel, is incapable of giving a poor performance in anything she shows her wonderfully exotic face in.

Here as Sandra, Cotillard digs deep into what may have made this woman tick so frequently and dangerously to begin with, but she also digs deep enough that we get an idea of what makes her worth rooting for, even when it seems like the ball is nowhere near her home-field. While it seems all too obvious that she may lose this opportunity to keep her job, there’s a small feeling of optimism constantly flowing throughout that makes it seem like, hell, she could pull this off by just simply having others feel sorry for her and, as a result, pity her. With those expressive eyes of Cotillard’s, there’s always the idea that whatever Sandra is going to do next, to whom, and why, it’s never calculated and never fully predictable. One second, she could be as quiet and as lovely as a bee buzzing on a hot summer day; another, she could be ready to crack her own head open for everybody to view the torment, agony and pain she seems to be going through on a regular basis.

Through it all though, Cotillard is constantly engaging and makes you feel that maybe while this woman probably wasn’t the best worker, she still doesn’t deserve to get stiffed from her job. At least not like this, that is. Then again, nobody deserves to be fired from their job without their full well-knowing, or better yet, their presence being dully noted. Maybe that’s the way our economy has turned – it’s making those who lose their jobs, lonely, sad and depressing individuals that probably had it coming to them, even if that’s not true to begin with. But, most importantly, it’s making those who keep their jobs, or at least, those who intend on keeping their jobs, to become selfish, mean, nasty, money-grubbing son-of-a-bitches that may have a moral code they want to stick with, but when it comes to sustaining the health and wealth of those that they love, they lose a bit of what makes them so human to begin with.

That’s just the world we live in, everybody. So try to make as much money as you can. Just do make sure that it is in a legal manner.

Consensus: Sometimes too simple for its own good, Two Days, One Night still compels by giving an all-too-realistic view into the life of a person who could be you or I, except she looks, acts, and is beautifully well-done by Marion Cotillard.