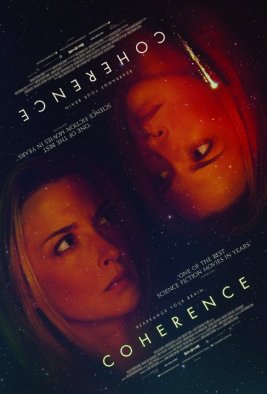 Dinner parties are sketchy enough as is.

A group of friends gather for a dinner party and the usual occurs- eating, smoking, drinking, and gossiping. Nothing out of the ordinary except for the fact that, on this night in particular, a comet is orbiting over them as they continue to speak. While this doesn’t necessarily freak them out at first, it definitely makes them a bit weary once weird stuff around the house begins to happen. Like, for instance, certain people’s iPhone screens start inexplicably cracking. And then, to make matters a bit worse, some party-goers start acting a bit, how to say it, off. They start to forget certain people’s faces and they begin to reveal deep, dark secrets that they wouldn’t have otherwise gone through with revealing, to a huge party no less. But it’s when the power goes off that everybody in the house decides that it’s time to figure out what the hell is going on, so they all walk outside to a neighbor’s house who actually seems to be the only people on the street with any electricity. This leads to a shocking discovery, one that can’t be spoiled; just teased around with.

Yes, everybody. It’s going to be one of those reviews. I apologize, but trust me, I’m doing it for you all out there who have yet to see Coherence, because honestly, it’s a little piece that deserves to be seen, probably knowing as little as possible about before going into. It isn’t just because the major plot-twist that occurs half-way into it is so shocking that you need to save yourselves from having it spoiled, but because little, micro-budget films like these hardly ever get made nowadays.

Or, should I say, when they do get made, they aren’t nearly as entertaining or as inspired as this.

Because, yes, for such small, meager-budgeted films like Coherence, it’s easy for a director to keep their film cheap by having the setting be one location and one location only. That’s what writer/director James Ward Byrkit does here, but rather than doing this as some sort of a crutch that he can fall back on, it actually works for the movie. And it’s not like because the movie is small and contained, means that what Byrkit is aiming at with this plot’s destination is exactly that; in fact, for a movie of this size, it’s relatively ambitious. Parallel universes are introduced, comets are seen flying overhead, and the overall meaning of one’s life is discussed on more than a few occasions.

But where this film goes and at what space it’s willing to go doesn’t matter, because what Byrkit does well with this premise is that he focuses his attention solely on these few dozen characters and allows us to see the way they act when thrown into a situation that just begs for the highest amount of paranoia. Some characters want to get down to the root of what’s causing this never ending sense of madness, whereas others are more or less content with just sitting around, drinking the night away, and basically just waiting for whatever craziness that is occurring, to end so they can get back on with their lives. No character here is really seen as “the baddie”, or “the goodie”, as much as they’re just seen as a bunch of individuals trying to get themselves out of the weird situation they’ve been sprung into.

Which is to say that this is a sign of a good cast, when each and every person involved, for the most part, seems believable and have you believe in this story, these characters, and their dilemma a whole lot more. But this is even more of astounding feet, especially when you get to thinking about the way in how Byrkit directed this movie and the actors in it. Rather than having them all set-up with their lines, knowing what to do, how to do it, and when, Byrkit literally just placed them in a spot, with bits and pieces of info, and toyed around with them as much as he could. Not only does this create a genuine feel of torment and suspense amongst the group, but it also shows us that some of these actors may literally be terrified for their live. Sometimes, especially in the case of this movie, the line between what’s real, and what isn’t, gets blurred and that helps this movie a whole lot more.

See, it’s actually more of a human-drama than it would have you think, although there is still plenty of sci-fi shenanigans to be seen.

And honestly, that’s where most of my problems with this movie lies. It’s not that I’m not a fan of sci-fi, I normally am, but it has to be done right and in a creative way. Rather than just making-up stuff and saying “that it’s all science, bro”, not only makes me believe less in you as a writer, but not really know what to expect next from whatever you’re creating. Normally, yes, this would be my cup of tea, but for most sci-fi movies, it feels like, a lot of the time, some people just prefer to make stuff up as they go along, all because they’re thrown under the genre of “sci-fi”, which in and of itself is used as a crutch.

It’s sort of like how I feel about the Mission: Impossible films, or any other flicks featuring spies and their handy, dandy, trusty gadgets – they have all sorts of gizmo’s and gadgets that can literally get themselves out of any situation all because, well, “they work for the CIA”. To me, it feels like a cheap cop-out, when it’s done wrong. When it’s done right, like in the latest two M:I movies, it works because it adds to the excitement and isn’t done to a certain extent to where it would seem excessive.

With Coherence, it’s not that it necessarily feels excessive, as much as it just feels unneeded. Byrkit could have been as vague as he wanted to be with what his plot-twist meant, or how it all came to be, but because he starts to explain it later on, it only confuses the situation a bit more. And then, apparently, some characters start breaking out into speeches about space and time-travel that not only feels a bit random, but completely unbelievable. It’s almost as if Byrkit didn’t trust his audience enough to allow them to come to their own conclusions about what it all meant and, altogether, because of the way Byrkit loves to fall back on the fact that there’s a comet hovering up above this whole story, is rather meaningless.

Consensus: As small as the budget for Coherence may be, that still doesn’t stop it from being an interesting sci-fi thriller, that sometimes trips over its own feet every so often, but still remains intriguing.