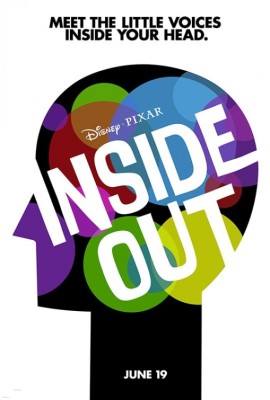 Whatever characters are in my head, they are some pretty messed-up individuals.

Riley Anderson (Kaitlyn Dias) is a twelve-year-old girl who is going through a bit of growing pains. After living her comfortable, lovely little life in Minnesota, her and her family all of a sudden have to move out to San Francisco, where she doesn’t know a single person and has to join a hockey team that she doesn’t seem to want to. However, to help her out through this whole turning point in her life, just like they’ve been there for her from the day she was born, are five personified emotions that live and work inside of her head: Sadness (Phyllis Smith), Fear (Bill Hader), Disgust (Mindy Kaling), Anger (Lewis Black), and the one who pretty much has all command over what happens, Joy (Amy Poehler). For some reason though, on Riley’s first day of school, Sadness can’t stop touching all of Riley’s happy memories, therefore making them sad, which, as a result, makes her more sad as a result. Things end up getting so out-of-hand with Sadness, that she screws up the whole system, which in turn, makes Riley into something of a mean, nasty and cruel girl to those around her. Now, it’s up to Joy and Sadness to figure out how they can fix the whole system so that Riley can get back to her old self – even if, you know, her old-self still needed some growing up to do.

I’ll start it all off by stating this: For the first time in what seems to be five years, I cried during a Pixar movie.

While that may have been an obvious statement at least a decade or so ago, when it seemed like Pixar excelled at doing that on a yearly-basis, the past few years haven’t been so kind to the company to where it would be the first thing on everybody’s mind. For one, they’ve ran into the problem that they had been working with such a great platform, for so very long, and seemed to be striking gold everywhere they went, that they were totally set-up to fail. Shame that it had to start with the dreadful Cars 2; go on a tad bit with the initially promising, but ultimately disappointing Brave; get very desperate with the prequel Monsters University; and then, suddenly, bow out of actually releasing a movie all year last year, something they haven’t done in I don’t know how long. What this seemed to be was just another case of a talented, original studio that have been breaking all sorts of ground with just about everything they put out, tragically, run out of any original ideas to pass-out to the masses.

Thankfully though, Inside Out is exactly the step back in the right direction for Pixar, and all of animation as a whole.

While the premise to Inside Out may already seem a little too heady for its own good, let alone a kids movie, have no fear as the creators do a terrific job of laying just about everything out perfectly to where we understand just how everything works. From the way Riley reacts to something, how she feels about her day, or to even what she dreams about when she sleeps at night, are all touched upon, but believe it or not, there’s still a bit of mystery hidden beneath that continues to let the film surprise us more and more. While it would have been easy to lay out all of the cards on the table and let us see it play its hand, Inside Out takes itself one step further as it not only continues to surprise us, the audience, with all of its terrific little tricks and goodies, but even surprise itself.

Whereas a movie such as this could have easily seemed like it was just making itself up as it went along, Inside Out seems like it knows where it wants to go and why, however, they let us join in on the ride, too, and hardly forget that they’re teaching the audience about what they’re doing, alongside entertaining them, too, of course. And the whole tinkering around with this plot and the certain surprises it offers alongside the way, are what makes the movie so funny to begin with. Though Inside Out has plenty of jokes aimed towards the kids (slapstick and such), there are equally just as many jokes, if not more, targeted towards those who may not even have to be adults to fully appreciate.

Literally, one could be 14 years of age, watch Inside Out, and laugh their rumps off at a passing-line that they didn’t see coming, nor will they fully remember when all is said and done with; however, if they pay attention long enough, they’ll be rewarded. So few movies actually congratulate its viewers on giving their whole heart and attention to what it’s presenting, and it’s such a great feeling to get that here with Inside Out – a movie that’s more about making fun its own self, rather than pointing a finger at the audience and making fun of them for not fully understanding what’s going on. Sure, some of the jokes are more on the “mature” side, but if you pay close enough attention, you’ll hear ’em, you’ll get ’em, and you’ll laugh at ’em.

And sometimes, that’s all you need with a comedy.

Then, of course, there’s the dramatic side to Inside Out and, like I said before, it absolutely obliterated me. While I must admit, a premise such as this is right up my ballpark (adolescence, growing, coming-of-age, etc.), Inside Out handles it so well to where it feels like it’s writers actually know a thing or two about going through that period of time where you’re growing up and starting to make a little sense of the world you’re in. You’re not fully there just yet, but you’re working your way there, and it’s a very scary, but always rewarding time in your life; trust me, I’m still going through it and I’m nearly 22!

Anyway, what at first seems like a neat conceit to tell a story about growing up, Inside Out soon turns out to be a heartwarming tale that uses its own mechanisms to show us how we all operate as we get older. Even though most of us grow out of adolescence and feel as if we are ready to take on the world with a fresh new start, the fact is that we really aren’t; sometimes, we need to depend on the good will and love of those around us. They could be friends, family, or confidantes who you don’t even think twice about on a regular-basis – it doesn’t matter who, they’re there for you when you need them and even if you don’t think you need them, trust us, you do.

But the movie also brings up another important aspect that doesn’t just have to do with growing up, but has to do with life as a whole. What the character of Joy represents is being happy and pleasant, all of the time, 24/7, never bringing other people down, and never having a worry in the world. This is a good mind-set to have, most of the times, but occasionally, you still need to bring yourself down to reality and look a bit on the gloomier side of things; which is exactly what the character of Sadness represents. While she’s not always about being depressed about every event in one’s life, she still realizes that people need sadder moments in their life, just to balance out all of the joyful ones; no one wants to be around a person who is always chirpy, nor does anyone want to be around a person who is always downer. Sometimes, they want somebody who is slap down in the middle and that’s the most important fact about life that Inside Out brings to light, especially for the kiddies that will go out and see this.

God, I’m so happy to be back to loving Pixar movies!

Consensus: Even despite its overly ambitious premise, Inside Out never loses its energetic muster to stop being entertaining, fun for the whole family, and most of all, heartwarming, proving that important messages about life can be in anywhere you look – you just have to search a bit closer.