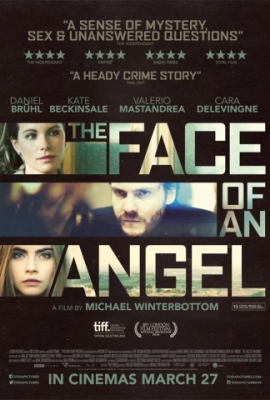 Thomas (Daniel Brühl) is a film-maker who is at a bit of a crossroads in both his professional, as well as his personal life. For one, he’s been assigned to make the film adaptation of a novel by the American author Simone Ford (Kate Beckinsale), which is about a murder case in which a young American girl was killed in Italy under suspicious circumstances. Then, he’s constantly going to battle with the British producers who want something more straight-forward that Thomas had in mind, therefore, causing him all the more confusion of what his vision could be. But as for his personal life, he’s trying his hardest to get over a recent divorce with an famous ex of his, while also still trying to maintain some sort of connection with his daughter. This all leads him to have some sort of drug addiction that constantly plays tricks with his mind. The only source of pleasure that Thomas can find at this point in his life is through the young, vibrant and British Melanie (Cara Delevingne), who helps Thomas out in maneuvering his way around Italy, as well as trying to figure his own-self out.

So yeah, basically what this whole movie’s about is how this one director is trying to make a movie out of what is, essentially, the Amanda Knox murder case. Surely, it’s an interesting event to make a movie after and it’s a bit of a surprise that someone hasn’t done so quicker, but Michael Winterbottom, being the ever so challenging auteur that he is, decided to take it one step closer and focus on everything going on around it. Rather than keeping the focus on the actual people involved, Winterbottom sticks his sights on those who are talking about it, reporting on it, making a living off of it, and most of all, looking to make a movie out of it.

It all sounds so very interesting, even if slightly jumbled – and that’s because it is.

While I appreciate the fact that Winterbottom seems so hell-bent on focusing on every aspect of this story, it all comes off as oddly put-together. For one, the movie seems like it wants to be some sort of cautionary tale for those who want to make films and how it doesn’t quite matter if you have a great idea in your head that you’ve got to roll with – if the producers aren’t happy, the movie’s not happening. And even if it does happen, it’ll be with somebody else. It’s an idea that we’ve seen presented in many movies before the Face of An Angel, and I highly doubt it will be the last one to do so, too, however, when pushed up against all else that’s going on here, it feels like a wasted opportunity.

Because with all that we’re supposed to be paying attention here (the case, Thomas’ personal life unraveling, etc.), we are then “treated” to a numerous amount of scenes where Thomas either has some spooky dreams that he’s being killed or hunted, or when he’s always running into this shady fella who he think may actually be involved with the murder. The movie does focus on the trial, the murder and all that, but it’s so surface-material that you probably could have read the opening paragraph of a New York Times article and got a better understanding of everything that happened. Which is a shame, because even a movie made about the Amanda Knox trial would have been interesting as is, but all of this unnecessary filler added-on just takes the impact away.

Which is to say that, yes, the Face of An Angel is a mess. But because it’s so scattered and mixed up, it’s not a very interesting one. While it seems to think it’s making some reaffirming points about improving one’s life, the movie more or less ends up being just about a needy, self-righteous film maker who doesn’t really do much throughout the whole movie except do drugs, have the occasional bout of sex, fawn over some young gal, and write his script for the potential movie to be made. A lot of this contains him whining and not really being able to grab our attention as well; as Winterbottom thinks he is, which is a total shame because Daniel Brühl is a very good actor.

That is, when he’s given the right material to fully work with. If not, he’s kind of a lost puppy.

And in the midst of this mess, that’s exactly what he is; while he does seem to be trying, it’s hard to make up your own impression of this character, when the movie itself doesn’t ever seem to be able to do so. The same goes for Kate Beckinsale as Simone Ford, who is surprisingly showing up in a smaller, more indie-based movie – something we haven’t seen from her in quite some time. And even though she’s fine and seems to be trying with this role, it falls on faint ears as her character comes in and out of the movie, to only screw Thomas and yawn on about some exposition that we don’t really need. It’s a shame, because who knows when we’re going to see Beckinsale go back to her early days and play in a smaller movie, but so be it.

I guess that means more Underworld movies are to come.

The only one out of this cast, hell, the whole movie, who is worth talking about and/or praising is Cara Delevingne as Melanie. Though her character is nothing more than an idea, Delevingne still give it all that she’s got with plenty of wit, charm and loveliness to her that it makes it seem like her character actually would randomly start hanging out with this dude she literally met for maybe all of two minutes. And even though her and Brühl seem to have some chemistry together, it’s all taken back by the fact that the movie seems to be concerning itself with way too much else that may, or may not be going on, and forgetting that, at it’s heart, it’s actually a drama about people making themselves better.

Or at least, that’s what I think.

Consensus: As usual, Winterbottom seems to have an interesting angle on a very conventional story, but with the Face of An Angel, he seems to be taking too many angles and forgetting how to make them all work together as one, cohesive whole.