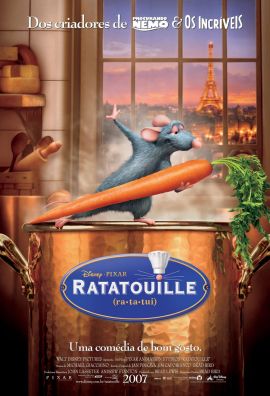 Some French people are so pretentious, that they’d actually think a rat who cooks food is “neat” and “ground-breaking”.

Though Remy (Patton Oswalt) is a rat stuck living the countryside, where he has to search for and steal whatever sort of grub he can find, he still dreams of doing something better with his life. In this better life of his, not only is he appreciating his food more, but also making it himself and dedicates plenty of his time to reading a cookbook from the late, but well-known Chef Gusteau (Brad Garrett). One day, however, Remy is forced to take up a different path than he normally does and, much to his surprise, finds himself in Gusteau’s restaurant’s kitchen. Here, Remy feels as if he can let his talents run wild, but how can he? For one, he’s a rat, and as most people know, rats and kitchens don’t quite go well. Then, there’s also the fact that he’s a rat and can’t be understood by humans. So yeah, the odds are stacked-up against Remy, but once a new chef named Linguini (Lou Romano). Despite Linguini’s awkward persona and general lack of prior experience in the kitchen, Linguini happens to be Gusteau’s kid, which gets him the job in the first place. But because Linguini is so desperate and willing to keep his job and make sure that he doesn’t disappoint his supposed father, he actually decides to take lessons from Remy and learn how to not just be a better cook, but in the process, become a better person, as well.

It’s still surprises, even until this very day, how an idea like this worked? I know it sounds so simple, but really, a movie about a rat making food? It’s so stupid and silly, in fact, that somehow, it made perfect sense why it would all work out. Because Ratatouille is, of course, a Pixar picture, there’s going to be a whole lot more effort, heart and emotion put into play; not to mention that because Brad Bird works on it, there’s going to be a chock full of inspiration, as well.

Which is exactly what Ratatouille is.

Pixar movies, from the very beginning, have always followed a sort of pattern that they so rarely stray away from. Granted, there are certain variations on the structure but, for the most part, there’s always this general sense that every Pixar movie is made out to be the very same as the last one, given the obvious differences in terms of plot, characters and general location. But it’s hard to get on Pixar’s case because they’ve always been known to kick some fine ass; though they definitely had a rough streak of three years-in-a-row with Cars 2, Brave and Monsters University, they still bounced back with Inside Out, showing that not only were they able to get back their creative-genius, but remind people why they fell so hard and deep in love with their movies to begin with.

It’s honestly a manipulative system, but it’s one that I will always continue to fall for, so long as Pixar continues to churn out actual, good movies that don’t feel like they exist to sell a whole bunch of T-shirts and toys.

Even though, yes, that’s exactly what they’re made for.

But despite all of this, Ratatouille is the kind of Pixar movie that makes you wonder just how they do it all. Because, for one, Ratatouille is a funny movie in that it’s not only just cute, but quite witty; there’s certain jokes that are clearly written in a smart-enough way that only an adult paying attention would be able to understand. Of course there are definitely jokes made for the younger-ones out there, but they mostly have to do with obvious slapstick – the adults are the ones who get treated to jokes about French people, food, and critics.

Speaking of which, Ratatouille isn’t just a movie based on the pure humor and fun of its gimmick. Sure, watching Remy and Linguini get together, work in tandem, and create all of these fancy dishes for even fancier people, is more than enough to make you want to step into the kitchen and whip up your own concoction, whatever it may be. Though we’re all talking about CGI food and whatnot here, it’s still hard not to get wrapped-up in everything and start to feel the adrenaline and fun one gets while creating something and absolutely loving every second of it.

Once again, this is an animated flick I’m talking about here, people.

But then again, it’s Pixar, so we all know what I’m talking about.

Like I was saying before, the heart of Ratatouille is what really helps it out in the end. What’s perhaps most interesting about Ratatouille is that there’s no real one, key moment where the water-works are demanded to start working. In other Pixar movies, this is very much the case; the first Toy Story has Buzz realizing that he’s an actual toy and not a real astronaut from Star Command, Monsters, Inc. has that tearful goodbye with Boo, and, as everybody knows, Up has the first ten minutes. Of course, there’s plenty more of these moments in other Pixar movies and I promise you, they don’t sound as obvious as I may make them out to be – you just know to expect one when you’re watching a Pixar movie.

That’s why it’s so strange that Ratatouille, despite featuring some nice moments of heart and kindness, doesn’t really have one of those moments. Then again, it doesn’t need one, because it’s already as sweet and as endearing as can be. Bird, despite working with animated characters who look like over-the-top caricatures, is able to give each and everyone their own bit of back-story/personality that makes them feel like actual characters with personalities that we can identify with.

The most perfect example of this is the prestigious food critic, Anton Ego, as voiced by the late Peter O’Toole. As most people know, critics don’t always get the soft side of the blade in movies – that’s why, whenever a movie comes out that portrays critics as being something other than miserable, cruel sad-sacks that hate their own lives so much, that they have to project their negative feelings onto other people’s hard work and dedication, it’s quite a lovely surprise. Here, we get the feeling that Anton is, yes, a very intimidating and picky figure, but, just like he states in the movie, it’s all for a reason. He loves food so much, that when he gets food that he doesn’t like or think is actually “good”, he spits it back out.

He loves his trade and he will do anything to ensure that the best players in said trade, continue to get the praise they deserve.

That said, Ego isn’t the only one who gets the lovely treatment here. Remy, as voiced by the lovable Patton Oswalt, goes through an awful lot of transformations here that help this character develop, despite being just a talking-rat; Linguini may have that nerdy shtick, but also seems to have it all come from a soft place in his heart, which helps make his growth, as a character, seem all the more believable; and Ian Holm, as the constantly paranoid and crazy Chef Skinner, also seems like he loves cooking so much, that he will do anything to make sure that his legacy stays alive and running, by any means. There’s plenty of other recognizable voices and nice characters here, both of which, go hand-in-hand oh so perfectly.

And you know what? Despite there being no big moment in Ratatouille, I still teared-up and awful lot!

Consensus: Ratatouille is another addition to the long list of Pixar flicks that are not only funny, entertaining and heartfelt, but also have an endearing, rather inspirational message about always doing the right thing and being your best self. It’s typical Pixar, but hey, if it ain’t broke, don’t fix it.