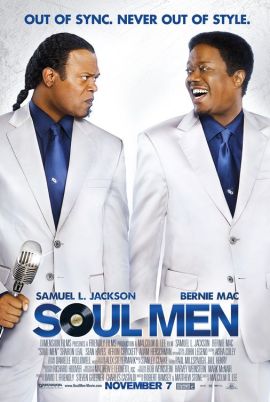 How many times can you say “mother****er” and still have it be funny each and every time?

Louis (Samuel L Jackson) and Floyd (Bernie Mac) were part of a popular singing duo back in the day, but both went their separate ways and never spoke again. When the death of their former group leader (John Legend) reunites them and sends them driving cross country for a tribute concert at the legendary Apollo Theatre, they will have only five days to bury the hatchet on a 20-year-old grudge.

If there’s any reason as to why you’d bother with Soul Men, it has to be because you want to see one of Bernie Mac’s final movies. Apparently, Samuel L. Jackson and Bernie Mac were friends for a couple of decades before this movie came out and just wanted to be in a film together for the longest time, and you can totally tell why because they have amazing chemistry here. Every chance they get together on-screen, it’s like magic working between two buddies that never seems to end and they always have something to say to each other, no matter how crude or rude it may be.

Which is to say that a lot of it is definitely ad-libbed as they go on non-stop rants using “mother****er” about 50 or so times (that is not an exaggeration either, people), and that’s what adds a lot of comedy to this film. There were many times where I found myself laughing really hard, other times I found myself chuckling, and other times I just felt myself smiling because I was seeing two buddies work together like they always wanted to, and having an absolute blast with it. Seriously, if it wasn’t for these two guys, this movie would have totally, and I do repeat, totally would have sucked, but because they’re together and making an absolute blast out of it, it’s worth watching.

But it’s not always these two guys together and that’s perhaps the biggest issue with Soul Men.

Since Soul Men is a tale about two older dudes on the road to a concert, we get a lot of blabbering, yelling, screaming, hootin’, and hollerin’ between the two which is relatively amusing at first because it’s these two guys doing it and they always make it entertaining to watch, but then it just goes on and on and on until the film really seems like it’s running out of ideas. A good boner joke is nice to have about two or three times when you have a movie about old dudes that are trying to stay hip and with it, but seriously, when you get to the point of when you have it up to a total of twelve jokes in a 90-minute movie, then you’re just shooting more for the teen-comedy crowd and not the type that would actually venture out to see a Mac/Jackson comedy about two old guys.

As with most movies that revolve around a band, and or, music in general, the soundtrack here is pretty solid with a couple of memorable tunes that pop in and out from time-to-time, as well as some original ones that sound like covers and are all pretty nice and fun to listen to, but don’t really do anything for the movie. Most of them sound unoriginal and although Mac and Jackson sing all of the songs with their terrible voices, they’re never actually played-up for laughs. Instead of the songs actually being a bit goofy and humorous at how bad these guys blow, they play it too seriously and every song-sequence goes on for way too long without any jokes involved whatsoever.

It gets even worse once the film begins to get sympathetic by the end and the really lose itself as it just feels uneven. If a comedy wants to play it nice and sweet by the end, there’s no problem with that. However, with Soul Men, it felt forced. Revelations come out as if they were working their way into the story the whole time and a certain character that’s supposed to mean something to both of these guys, doesn’t really do anything and is sort of forgotten about once that character leaves the screen.

I’m not trying to spoil anything, but does it really matter?

Probably the strangest fact about this movie is not only how Bernie Mac died after filming just wrapped-up, but also how Issac Hayes, who also shows up here, died exactly a day after him. That’s right Chef was a goner right after Mac, and at the end of the movie they sort of touch on this fact in a very well-done, and emotionally-charged tribute to the two and it actually got me a bit misty-eyed. This tribute was probably the highlight of this flick and definitely seemed like it got more attention to it, than the actual film itself and it’s shame that Mac and Hayes had to go out on something like this because even though the movie’s not horrible to watch, you still can’t help but feel like these two deserved something better to use as a swan song and have people remember why they were so loved in the first place.

Consensus: Despite there being a great chemistry between Samuel L. Jackson and Bernie Mac, Soul Men still flounders underneath its own weight of sentimentality and a lack of actual fun, interesting ideas to roll with its story.