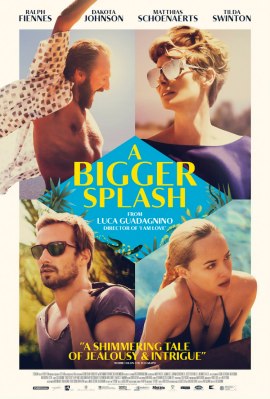 Life is always better under the sun.

Marianne Lane (Tilda Swinton), a famous rock star, is now living away on the remote Italian island of Pantelleria, where she and her photographer boyfriend Paul (Matthias Schoenaerts) spend most of their time eating, laying in the sun, dancing, swimming, laying around naked and, oh yeah, having lots and lots of sex. And for Marianne, this is especially great, seeing as how she can’t speak or strain her vocal-chords all that much due to a recent bit of surgery that may make, or break her long career. But while it seems like Marianne and Paul have the perfect set-up, it gets shaken up a tad bit by Harry (Ralph Fiennes), a former flame of Marianne’s, and a friend of Paul’s. While neither have seen Harry in quite some time, they have no problem with him around, because he’s such a blast to be around, but for some reason, Harry’s got himself a bit of a surprise with him: His daughter, Penelope (Dakota Johnson), who, according to him, he only found out about a few weeks prior. Seems fishy, right? Well, as the next few days or so go by, the situation gets more and more tense as old skeletons come out of the closet and people who shouldn’t be getting too close to one another, can’t help but get close to one another.

A lot of people loved Luca Guadagnino’s I Am Love. I was not one of them, unfortuantely. For some reason, I felt like there was a whole lot more style going on than any actual story to really keep things tight and all that together, which sometimes made it feel like a pretentious slog. It looked great and, as always, featured Tilda Swinton in top-form, but really, it’s one of the main reasons that I wasn’t really looking forward towards A Bigger Splash. The cast is good and the premise seems interesting, but in the hands of Guadagnino, it could all go up in beautiful-looking, but muddled flames.

Thankfully, it didn’t and holy hell, the movie is so much better off for it.

Don’t get me wrong though, a lot of the rambunctious tendencies from Guadagnino are still out and about here, although they’re far more pushed to the backside than I expected. For some reason, a subplot concerning refugees is brought up in awkward, somewhat random ways, and even though there’s an eventual pay-off to its inclusion, it never gels together with the rest of the story. And also, not to mention that, on occasion, it seems like Guadagnino can’t help himself from blaring the trumpets and horns of the score as loud as they can be, to where it’s not only overbearing, but also gets in the way of what any of the actual characters are trying to say one another.

I know, it all sounds like annoying nitpicks on my part, but once again, these seem to be little eccentricities that Guadagnino himself can’t seem to contain himself away from. For some viewers, it may totally work and add an extra bit of excitement, but for someone like me, who appreciates a clear cut story, the kind that the movie gives us an awful lot, it can get a tad annoying. It almost feels as if Guadagnino doesn’t feel totally comfortable with having so many scenes where people just sit in rooms, or around a table, just talking to and staring at one another, that he all of a sudden has to call up the orchestra to bring the tunes in.

But regardless of all this, yes, A Bigger Splash is, for at least a solid portion of its two-hour run-time, a movie where people sit in rooms, talking to and staring at one another and you know what?

The cast, for one, is really where Guadagnino got lucky. Tilda Swinton, as usual, is great, but here, she gets to play it a bit different; because her character can’t speak too loud, or barely at all, she has to do a lot of emoting and speaking with the looks on her face and body-motions and it’s an impressive performance from an actress who, honestly, we’ve gotten so many from, that it’s pretty hard to count by now. Her backstory as a big-time rock star may not totally work (her music sounds like really mediocre Tom Petty), but it doesn’t matter because after awhile, you just take the movie’s word for itself.

On the other hand, you’ve got Ralph Fiennes as Harry and well, he’s having the absolute time of his life in the role, as if you’ve never seen him before. As soon as he walks into the movie, all of a sudden, everything’s wacky, wild, exciting and most importantly, fun. Fiennes adds a certain bit of zaniness to this character that was always there in the beginning, but also doesn’t allow for us to forget that this in fact a human being and once we start to see his past relationship with Paul and Marianne get brought up more and more, we start to see him for what he was, and yeah, maybe still is. He’s the life of the party, but that’s only because he’s got such a controlling personality that needs to have everything his way, or the absolute highway; if anything, this character’s a lot more scary than you’d think from the very beginning, but it’s why Fiennes is such a marvel to watch here, as we sit back and watch this character unravel right in front of our very own eyes.

Dakota Johnson and Matthias Schoenaerts don’t have nearly the kind of flashy roles as Swinton and Fiennes do, but that’s fine, because they’re totally capable of making their time matter. Johnson is a fiery, seductive and mysterious grown-up version of Lolita here, whereas Schoenaerts is supposed to be this drab, dull and ultra serious bro who used to have a drinking problem and clearly has a problem with this situation. Schoenaerts has been knocking each and every role out of the park as of late, that even something like this, where it seems like he’s not really playing an interesting character, he still does wonders with, in all of the smallest ways possible.

It just goes to show you that it doesn’t matter if you have a bit of sketchy story – get a good cast together and yes, you’ve got yourself a pretty solid movie.

Consensus: Despite the occasional lapse into random pretentiousness, A Bigger Splash ultimately benefits from the fun, yet engaging cast who came ready to play with every bit of their might.