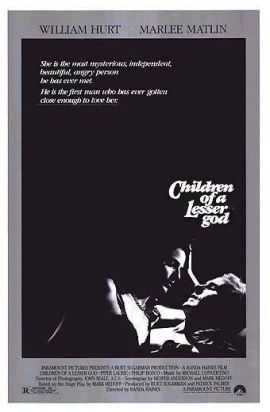 Seeing is believing and so is hearing, too. I guess.

Speech teacher James Leeds (William Hurt) runs his class the way he wants to and the kids love him for that. However, his world one day is all mixed up when he meets a deaf custodian, Sarah Norman (Marlee Matlin), and takes his world by storm, allowing for him to not just find love unlike ever before, but hope and happiness, too. As well, of course, anger, too.

It’s hard to do a movie about people with disabilities, as you can sometimes tell when a writer/director is sneering at those less fortunate then them. At the same time, however, it’s also hard to do them justice without ever making people with disabilities seem as if they are ungodly-like saints that Christ himself would have christened, had he the chance to do so. After all, they’re just like you or I, normal people, trying to get by and live in a world that, unfortunately, they need some assistance with.

That’s why it’s nice to director Randa Haines work well with the material and show people with disabilities, with a little bit of both. They’re not made out to be walking, talking pity parties, nor are they made out to be later-day saints – they’re just people.

But the movie is less focused, it seems, on actually trying harder and harder to delve into the deaf community and those affected by it, and just tell another romantic story, but this time, with more deaf people and sign language. Sure, it’s an interesting avenue that you can do a lot with, if you choose to do so, but for some odd reason, Haines feels perfectly content with just letting the romance play-out throughout the whole flick and leaving it at that. Hardly any shocks, surprises, or ground-breaking moments to be found here – nope, Children of a Lesser God is just your typical piece of romance, but engineered in a way to make you think it’s more than just that.

If anything, it’s a relationship with a “meaning”, or better yet, a “purpose”.

But as it’s easy to predict, the relationship that these two protagonist have with one another starts to fall out of control and they both start to realize that their needs and wants may never be satisfied with one another, regardless of how much time and effort they put into it. That would have been a fine attitude to take about a relationship between a guy who can speak and a girl who can’t, but the film treats it in such a melodramatic and sappy way that it was eye-rolling at points. There is of course the one infamous scene where they’re fighting one second, and the next, they’re on the floor, ripping each other’s clothes off, ready to make a baby or something, that comes out of nowhere, but with good reason. Maybe the movie’s trying to say that “love can, often times, be so destructive, that you will go from doing one bad thing, to doing something great the next?”

That, or the movie’s just trying to say, “Hey, yeah. These two hot, attractive people want to bone, so why not let them do it, right?”

Yeah, I think that’s what it is.

Either way, William Hurt is good here, and he constantly had me wondering about him and his screen-appeal. In the 80’s, he was a big draw for some reason, as he wasn’t particularly good-looking, nor was he all that of a likable screen-presence; granted, that’s one of the things that drew me to him, but it’s interesting to see the trajectory of his career from where everyone was loving him, even if he wasn’t always playing the nice guy. Cause yeah, the guy’s a bit of a creep, he’s rough on the edges, and he seems to be a very honest person with all of the roles that he takes, and that’s why it seemed a bit strange for him to be in the lead role as James Leeds, a guy who appears to be the polar-opposite of that. That’s not to say that Hurt doesn’t do a good job, because he does a very good one of handling his own and getting down all of the right sign-language, but there was something about this character that didn’t really interest me, or even feel right to me. Instead, I sort of just wanted him to leave this poor girl alone and move on with his life since she seemed so settled and happy way, way before he came into it.

Speaking of that poor girl, if there is any reason why I’m giving this film a recommendation at all, it’s only because of Marlee Matlin and how amazing she is in this lead role as Sarah Norman. Yes, Matlin is deaf, but the girl does a better job in this lead role, than I could have ever imagined coming from any Hollywood prissy. Matlin does a nice job conveying all the different types of emotions that go through a deaf person’s mind whenever they want to be treated as an equal and it’s even better to watch as her character realizes a lot of things about life that she wouldn’t have normally noticed, if it hadn’t been for Leeds. This makes her a hell of a lot more interesting character than him and it’s just amazing to watch Matlin work the sign language perfectly, make some compelling facial expressions that never come off as campy or cartoonish, but instead, show us just how one person can be loved by another, even if those words are never uttered. We get a sense of who she is, even despite the fact that she can’t speak well, or be heard from everyone around her and it’s why she’s the heart and soul of the story.

If only someone would have told the creators that.

Consensus: Matlin is great in the lead role, but unfortunately, she’s let-down by a, at times, conventional and odd romance within Children of a Lesser God – a movie that may or may not have something interesting to say.