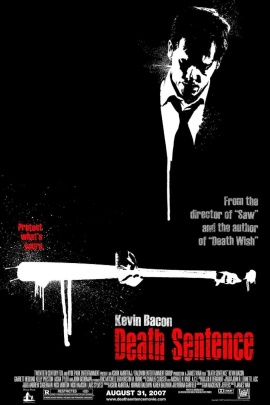 Nazis never back down from a fight. Except when they’re swarmed by the Allied forces and have no way out.

On the way from a hockey game with his son, Nick Hume (Kevin Bacon) decides to stop for gas, because, well, the tank is low and he needs to. However, the station that he’s at gets robbed by a gang of thugs and in the process, Nick’s son gets caught in the crossfire. Obviously, this leaves Nick, as well as the rest of his family as devastated as can be. And while Nick may be just another simpleton, after something as tragic as this, he can’t help but think what’s next for him. Should he just sit around, mope and wallow in his pain and misery? Or, should he go out there and take down said thugs who are causing said pain and misery? Well, Nick being the inspired fella that he is, chooses the later option and is now tracking down and taking out these thugs, one by one. But by doing so, Nick also brings more terror and violence to his family, with the thugs now extracting their own kind of revenge.

A movie like Death Sentence is a hard one to recommend, because you know full well what it is, but at the same time, you still enjoyed some piece of it. At its heart, Death Sentence is nothing more than a dirty, disgusting and downright mean-spirited revenge tale, made out to be Y2K’s answer to Death Wish, where the good guys go around extracting revenge, baddies get killed and justice is kind of served, without their being any grey area in between. And because of that, the movie is an ugly piece; one that doesn’t try to make any smart messages about life, humanity, justice, death, or violence, but instead, just wants to see people kill one another in bloody, incredibly gory ways.

Can there be some fun in that?

Sure, there can be! Director James Wan, who has now become something of a godsend for horror flicks, actually does a solid job as director here, because he lets a lot of the action speak for itself. He doesn’t get in the way by jilting around the camera, nor does he try to make it “about anything”; with this kind of material, you’d almost wish that Wan at least attempted to make this about something more than just plain and simple blood-stained revenge, but oh well. The fact remains that, when the action is on-screen, it’s quite riveting and exciting to watch.

Take, for instance, a near-20-minute sequence in which Bacon’s character has a chase sequence with the villains of the story. What starts off of as a conventional run through the streets, eventually turns into something intense, unpredictable, and most importantly, exciting. Wan uses a few camera-tricks here and there to make it seem like nothing you’ve ever seen before and well, it works. Because the rest of the movie doesn’t try to get in the way, these small, brief instances of style from Wan are fine enough because they show that he does care to some degree about the material.

However, when the action is gone, dead and off the screen, Wan loses Death Sentence.

There’s no doubting the fact that Death Sentence is just a trashy, gory and downright grueling B-movie, however, at the same time, there’s no denying the fact that it also takes itself very seriously and at least attempts to try and be more meaningful than it is. Wan loves the action and violence and wants to solely focus on that, which is fine, but because there’s an actual story here, it all feels a slight bit uneven. Whereas the story wants to have its say about what’s right, what’s wrong, and what’s sort of “okay” with the world today, Wan just wants to see people get killed for the sake of being killed because, well, their bad people and they probably deserve it anyway. Once again, I’m not trashing on Wan for giving bad people some disturbing deaths, to try and have us feel bad, or at the very least, upset that we’re entertained by watching this, is silly.

Wan knows that he wants us to all stand-up, cheer and root for Bacon as he takes out all of his revenge on these thugs, so why not enjoy it while we can? It may be vile and upsetting, but isn’t that sort of the point? Violence isn’t supposed to be this pretty, beautiful thing that’s just around in ordinary life – it’s supposed to be ugly, sad, and scary, regardless of who is involved with the violence. Wan gets the ugliness of the violence right, but when he tries to put the lens on everything else, it seems like he’s confused to which movie he’s making, or just what he’s trying to say.

Then again, he’s got Kevin Bacon to rely on, so he’s not all that left alone.

And as Nick Hume, Bacon is as good as he can be, given the script and material he has to work with. Nick doesn’t have much development beyond “sad, but vengeful daddy-figure”, but Bacon gives it all he’s got, whenever he’s not kicking people’s asses because he’s ticked-off and not going to take it anymore. Garrett Hedlund shows up as one of thug’s older brothers, who basically becomes the arch-rival of Bacon’s and, well, he tries. What’s interesting about Hedlund and his career is that even though he’s been around forever, it’s only just now that it seems like he’s hit his stride and gotten to really show some charm in these movies.

Back in 2007, it appears like Hedlund was confused with every role he took; some relied on him to just be annoying and whiny, whereas others relied on him to be somewhat sinister. It’s an odd mix-and-match that he had to play around with, which is why his performance here can get to be pretty laughable at times. However, it seems as if everything has been looking up for Hedlund and I hope that stays.

For his sake, at least.

Consensus: Wan definitely knows his way around an action scene or two, but Death Sentence also tries to be so much more than just another bloody, gritty revenge tale, which is its biggest problem.

Photos Courtesy of: Head in a Vice