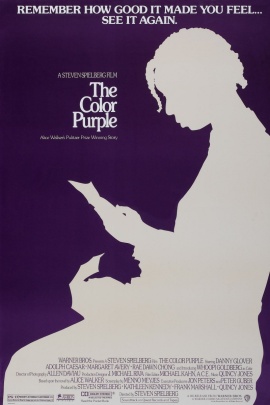 Men are always bringing women down. Doesn’t matter the race.

Celie (Whoopi Goldberg) has had a pretty rough life. At a very early age, she was impregnated not once, but twice by her daddy and rather than getting the chance to raise the spawn of his seed, they were taken away from her and sold to a family that was willing to pay a healthy price for the children. And honestly, Celie couldn’t do anything about it. After all, she was an African-American woman living in the South, during the early-1900’s, where not only did black people of every kind face all sorts of harsh treatment and inequality throughout society, but most of all, women especially. But the pain and torture for Celie doesn’t stop there; eventually, she gets married off to the wealthy, but equally as abusive “Mister” Albert Johnson (Danny Glover). While she’s given a spacious place to live in and a few stepchildren to care for, mostly, Celie’s time spent here is filled with utter torment, and Albert is not only a mean person, but one that does not care about making it known about his extramarital affairs – something that would absolutely upset Celie, however, she’s just too numb to feel anything. The only glimmer of hope in Celie’s life is the idea that one day, possibly, she will be reunited with her sister, who is apparently out and about in Africa, learning all that there is to learn of the native land.

Steven Spielberg, in hindsight, may have been an odd choice for this sometimes cruel source material. Considering that he isn’t a man of color, but also, at this point in his career, wasn’t always known for his deep, dark and disturbing dramas. If anything, he was most known for the summer blockbusters he churned out to both critical, as well as commercial acclaim. Nowadays, we know and can usually depend on Spielberg for these kinds of dark dramas, but in 1985, it was a hard idea to fathom that Spielberg would take source material as coveted and as regarded as this.

But still, Spielberg being Spielberg, he makes it his own.

The Color Purple is, by all means, a very disturbing flick. Right from the very beginning, when we find out that Celie’s father has been raping her, impregnating her, and giving her children away for money, it’s a huge shock. Most movies/stories would have that be its final twist at the tail-end, when people aren’t ready or expecting hard, messed-up truths like that to come out. But nope, Spielberg allows for the movie to get as grim as can humanly be, right off the bat; it’s not just a shocker, but a smart move, as it allows for the rest of the film to play out as terribly disgusting and inhumane as can be.

But it’s all worth it, as odd as that sounds. Spielberg isn’t just allowing for Celie’s story to play out, one scene after another, in which she is assaulted in every sorts of way imaginable. Sure, you could definitely pin-point the movie as being all of that, but honestly, it doesn’t feel like that. The movie moves at a steady pace where we’re able to be horrified by the atrocities, but also get an understanding of who these people are involved with said atrocities; in fact, that actually helps the movie a whole lot more as we learn to care extra for Celie and those around her who may be on the receiving, or giving end of certain assaults and whatnot.

It may not sound like much, but it goes a long way to help us grow more immersed with these character’s lives and the world around them.

And because of that, the Color Purple can sometimes be a rough movie to sit through. In a way, you almost wish that Spielberg himself would look away, or take a moment to pause from all of the brutality and instead, move the plot forward, but all of the rough and nasty edges are what sort of make this story all the more heartfelt. Had Celie, as well as those around her, had been assaulted once or twice throughout the whole two-and-a-half-hours, the movie wouldn’t have as much of an emotional impact. But because Celie and all of the other women are treated so awfully, basically throughout, it makes a whole lick of difference and makes us feel like their situation is way worse than we could have imagined.

Though Spielberg is one for sentimentality (like he shows in the last-act), he still doesn’t forget about the mean realities in life that plague our society. That’s why, for all of the silly choices Spielberg makes – like, for instance, allowing for a score to play just about throughout the whole run-time in a rather obnoxious manner – he still gets the meat and the crux of the story right. This is a story about women – black women, in particular. And they aren’t growing up in any certain time like today – it’s the South and it’s the early-1900’s.

The times weren’t pretty and they don’t deserve to be seen as such.

And as Celie, Whoopi Goldberg is quite great. There’s a lot of staring and crying that she has to do, which may make it appear like she doesn’t have a whole lot of range, but what Goldberg is doing so well, is that she’s bottling everything about Celie up that, once we get to a certain point, we see that she’s about to ready to explode. And yes, when she does in fact, explode, it’s a great scene and reminds us all why Goldberg, her View-shenanigans aside, is a great actress and is more than willing of that Oscar she achieved some sixteen years ago (yes, I know it was for Ghost, but you can almost think of it as an “apology Oscar” from the Academy for not giving it to her here).

But it’s not just Goldberg who is great here. Playing the strong-willed and sassy Sofia, Oprah Winfrey reminds us that she’s a great actress too, showing us a funny and honest character who, despite always having something to say, may also be her own worst enemy and is almost deserving of her own movie entirely; Danny Glover is downright terrifying and vile as Albert, but rightfully so, and in some brief instances, we do get to see a certain level of humanity, making us see this man for what he is: A human; and as the lively and sexy Shug Avery, Margaret Avery shows us the more positive sides to being a black women living at this time and also awakens something of a sexual desire within Celie that brings out the best in both of them.

And thankfully, the women here all got Oscar nominations. Though, of course, they didn’t win.

Consensus: Though it isn’t without the occasional misstep and Spielberg indulgence, the Color Purple is still a hard-hitting, effective and surprisingly emotional tale of racism, bigotry and violence that’s as disturbing as it should be.