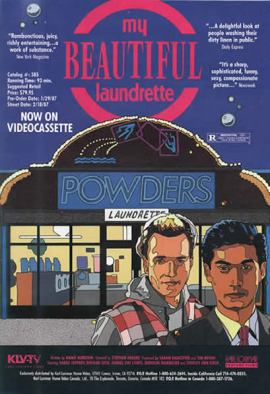 Laundromats were invented to bring people closer together.

In a seedy corner of London, where the tourists aren’t quite encouraged to travel out to see and witness, Omar (Gordon Warnecke), a young Pakistani, is given a run-down laundromat by his uncle (Saeed Jaffrey). His uncle hopes for it to be as successful as every other business idea he has made in this great land of opportunity, which leads Omar to do whatever he can to make sure all goes smoothly and according to plan. But soon after, Omar is attacked by a group of racist punks, leading him to question whether or not he wants to give this job a shot in the first place. All issues go out the window, though, when he realizes their leader is his former lover, Johnny (Daniel Day-Lewis). The men decide that it’s best to work together and see what they can make of this laundromat, while also trying to continue their relationship. However, certain social issues arise, when people start to find out that they’re more than just business-partners and are, in fact, get ready for it, in love.

My Beautiful Laundrette feels and acts a tad like a student film. While Stephen Frears was no slouch by the time this movie was made and released, there’s still that feeling that he may be rushing things a tad too much. After all, making a movie and getting it out to the general public is difficult as is, so might as well get all that you can, out there for everyone to see, right?

That’s why, while watching Laundrette, I couldn’t help but wonder why Frears himself wouldn’t slow things down a bit. Granted, it does keep a story like this interesting, just by moving at an efficient pace, but it also makes us lose out on some of the smaller, more intricate details of the plot and the characters that would make a movie like this so rich and pure. It’s almost as if the script was much, much longer, so Frears himself decided to hit all of the bullet-points and just expect the audience to fall in line with everything that he showed and left it at that.

It doesn’t quite work, but that isn’t to say that Hanif Kureishi’s script isn’t good, because it is.

What Kureishi does best is that he balances out the actual heart and humanity of these characters, with the certain social-issues that surround them. However, Kureishi doesn’t make these social-issues and concerns the sole factor in determining who these characters are; it’s something that they represent, but they’re much more than just their points and opinions about society and politics. For instance, a great example of this is Saeed Jaffrey’s Nasser – he’s the uncle of the family who came over to England at a very young age and, metaphorically speaking, took the bull by the horns. He saw a land, rich with opportunity, and he decided to go for it, becoming successful, but also opening up the doors for those others just like him who are looking to make a break in a foreign land.

But what’s interesting about the script is how it shows that this can also be something of his demise; in a way, it’s made him more pompous and forget exactly who he is, where he comes from, and who he’s supposed to love. Jaffrey’s performance is wonderful and it helps make Nasser the most interesting character of the bunch, because we know what he’s supposed to represent, but the script is too smart to get bogged down by all of this and just focus on this one, in particular detail. Same goes for the gay love-angle – for a movie from 1985, Laundrette is surprisingly modern and not all that dated when it comes to two men falling in love and having sex. Sure, it’s not graphic by any means, but the movie doesn’t shy away from their little love affair either, and while I wouldn’t be saying it was a brave move in today’s day and age of cinema, back then, it must have broken down barriers.

Or maybe not. I don’t know. I myself wasn’t even a thought by that point.

But even when the direction fails them, the performances from the cast are quite solid, too. Aside from Jaffrey, Daniel Day-Lewis really does shine as Johnny, the punk-turned-legitimate-businessman, showing both sides of his anger, as well as his compassion for the world around him. Though Day-Lewis was young and not quite the powerhouse he would come to be known as, you still get inklings of things to come, whenever the opportunity presents itself here.

As for Gordon Warnecke, he’s pretty good, too. Together, the two share a sensual and sweet chemistry that doesn’t feel phony. Had the movie been solely about their love and compassion for one another, amidst all of this tension, turmoil and prejudice, it probably would have been a lot stronger and gotten rid of some of the messier-portions of the flick; however, as is, the movie still works because Warnecke and Day-Lewis seem believable in their love for one another. It kind of comes out of nowhere, honestly, but the look in their eyes when they see each other is true and it helps carry the movie through some of its murkier waters.

Consensus: Frears’ direction may be a little amateurish, but thankfully, My Beautiful Laundrette benefits from a great script and even better performances from the solid cast.